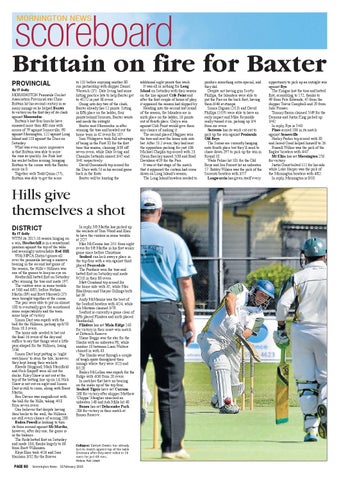 Brittain on fire for Baxter PROVINCIAL By IT Gully MORNINGTON Peninsula Cricket Association Provincial star Chris Brittain hit his second century in as many innings as he helped Baxter to victory on the first day of its clash against Moorooduc. Brittain’s last four knocks have amassed more than 400 runs with scores of 79 against Somerville, 90 against Mornington, 122 against Long Island and 118 against the Ducs on Saturday. What was even more impressive is that Brittain was able to score the runs so quickly. Joe Rule lost his wicket before scoring, bringing Brittain to the crease with the Baxter score on 0. Together with Todd Quinn (57), Brittain was able to get the score

to 131 before enjoying another 80 run partnership with skipper Daniel Warwick (35). Dale Irving had some hitting practice late to help Baxter get to 4/272 in just 38 overs. Going into day two of the clash, Baxter already has 12 points. Sitting in fifth place on the ladder, four points behind Sorrento, Baxter wants and needs the outright. Baxter sent Moorooduc in after winning the toss and bowled out the home team in 42 overs for 167. Sam Wolsgrove took full advantage of being in the First XI for the first time this season, claiming 3/39 off seven overs, while Dale Irving and Chamika Sattambi snared 3/47 and 3/41 respectively. David Greensmith top scored for the Ducs with 53 in his second game back in the firsts. Baxter will be hunting the

Hills give themselves a shot DISTRICT

By IT Gully WITH its 2015-16 season hinging on a win, Heatherhill is in a sensational position against the top of the table and seemingly untouchable Red Hill. With MPCA District games all over the peninsula having a massive bearing in the second last game of the season, the Hills v Hillmen was one of the games to keep an eye on. Heatherhill batted first on Saturday after winning the toss and made 197. The visitors were in some trouble at 5/66 and 6/85, before Nathan Martin (89) and Brett Maxwell (37) were brought together at the crease. The pair were able to put on almost 100 to eventually give the scoreboard some respectability and the team some hope of victory. Simon Dart was superb with the ball for the Hillmen, picking up 6/50 from 18.3 overs. The home side needed to bat out the final 16 overs of the day and suffice to say that things went a little pear-shaped for the Hillmen, losing 5/36. Simon Dart kept putting in ‘night watchmen’ to stem the tide, however they kept losing their wickets. Rheede Hopgood, Mark Merrifield and Nick Esipoff were all out for ducks. Riley Shaw is not out at the top of the batting line up on 14, Nick Shaw is not out on eight and Simon Dart is still to come, along with Brent Martin. Ben Davies was magnificent with the ball for the Hills, taking 4/18 from seven overs. One believes that despite having their backs to the wall, the Hillmen are still every chance of scoring 200. Baden Powell is looking to turn its form around against Mt Martha, however, after day one, the game is in the balance. The Reds batted first on Saturday and made 164, thanks largely to 66 from Brett Wilkinson. Rhys Elmi took 4/26 and Sam Harrison 3/32 for the Braves.

In reply, Mt Martha has picked up the wickets of Tom Wood and Elmi to have the visitors in some trouble at 2/27. Max McKenzie has 2/11 from eight overs for Mt Martha in his first senior game since before Christmas. Seaford can lock away a place in the top four with a win against third placed Pearcedale. The Panthers won the toss and batted first on Saturday and made 9/210 in their 80 overs. Matt Cousland top scored for the home side with 45, while Max Blackburn and Shayne Gillings both hit 39. Andy McMannis was the best of the Seaford bowlers with 4/24, while Ali Mortaza claimed 3/79. Seaford is currently a game clear of fifth placed Flinders and sixth placed Heatherhill. Flinders has set Main Ridge 243 for victory in their must–win match at Ditterich Reserve. Shane Beggs was the star for the Sharks with an unbeaten 98, while number 10 batsman Liam Wolters chimed in with 43. The Sharks went through a couple of tough spots throughout their innings where they were 3/23 and 8/128. Bailey McLellan was superb for the Ridge with 4/36 from 20 overs. In matches that have no bearing on the make up of the top four, Seaford Tigers have set Carrum 268 for victory after skipper Matthew ‘Chippa’ Meagher smacked an unbeaten 148 and Ash Mills hit 40. Boneo has set Delacombe Park 286 for victory in their match at Boneo Reserve.

Collapse: Carrum Downs has already lost its match against top of the table Dromana after they were rolled in 36 overs for just 48 runs. Picture: Rab Siddhi

additional eight points this week. It was all or nothing for Long Island on Saturday with their season on the line against Crib Point and after the first couple of hours of play, it appeared the season had slipped by. Heading into the second last round of the season, the Islanders are in sixth place on the ladder, 16 points out of fourth place. Only a win against Crib Point would give them any chance of making it. The second placed Magpies won the toss and sent the home side into bat. After 53.2 overs, they had sent the opposition packing for just 106. Michael Chaplin top scored with 23. Glenn Barclay snared 5/38 and Brad Davidson 4/29 for the Pies. It was at that stage of the match that it appeared the curtain had come down on Long Island’s season. The Long Island bowlers needed to

produce something extra special, and they did. Despite not having gun Scotty Phillips, the Islanders were able to put the Pies on the back foot, having them 6/46 at stumps. Simon Dignan (2/13) and David Phillips (1/19) were able to have an early impact and Mike Reynolds really turned it on, picking up 3/4 from six overs. Sorrento has its work cut out to pick up the win against Peninsula Old Boys. The Sorras are currently hanging onto fourth place but they’ll need to chase down 297 to pick up the win in Round 10. Wade Pelzer hit 101 for the Old Boys and Jon Forrest hit an unbeaten 57. Bobby Wilson was the pick of the Sorrento bowlers with 3/57. Langwarrin has given itself every

opportunity to pick up an outright win against Rye. The Kangas lost the toss and batted first, scrambling to 172, thanks to 49 from Pete Edwards, 47 from the skipper Travis Campbell and 29 from Jake Prosser. Tommy Baron claimed 5/49 for the Demons and Justin King picked up 3/42. In reply, Rye is 5/43. Pines scored 186 in its match against Somerville. Harley Parker top scored with 30 and Jarred Coad helped himself to 26. Russell Wilkes was the pick of the Eagles’ bowlers with 4/47. Mt Eliza has set Mornington 256 for victory. Justin Grant belted 112 for his side while Luke Harper was the pick of the Mornington bowlers with 4/82. In reply, Mornington is 0/10.