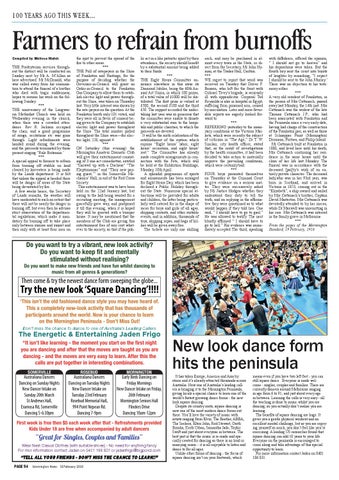 Farmers to refrain from burnoffs Compiled by Melissa Walsh THE Presbyterian services throughout the district will be conducted on Sunday next by Mr A. M’Allan as here advertised. Mr McDonald, who was called away from his examination to attend the funeral of a brother who died with tragic suddenness, hopes to resume his work on the following Sunday. *** THE anniversary of the Langwarrin Methodist Church was held on Wednesday evening in the church, when there was a crowded attendance. Rev R. Jackson occupied the chair, and a good programme of songs, recitations etc was gone through. Light refreshments were handed round during the evening, and the proceeds terminated by those present singing “Rule Britannia.’ *** A special appeal to farmers to refrain from burning off stubble on land cleared by harvesters is being made by the Lands department. It is felt that unless the appeal is heeded there will be danger of areas of the State being devastated by fire. A few weeks hence, the Secretary of Lands remarks, the weather will have moderated to such an extent that there will not be nearly the danger in burning off, but even then he advises strict observation of the departmental regulations, which make it mandatory for burning off to take place only between sunrise and sunset and then only with at least four men on

the spot to prevent the spread of the fire to other areas. *** THE Poll of ratepayers in the Shire of Frankston and Hastings, for the purpose of deciding whether the Governor-in-Council will grant an Order-in-Council to the Frankston Gas Company to allow them to establish electric light and power throughout the Shire, was taken on Thursday last. Very little interest was shown by the rate-payers on the question. At the Frankston booth only 101 voted, and they were all in favor of consent being given to the Company to establish electric light and power throughout the Shire. The total number polled throughout the Shire were—for electric light, 228, against 4. *** ON Saturday (this evening) the Mornington Amateur Dramatic Club will give their entertainment consisting of 3 one-act comediettas, entitled “Snowed up with a Duchess” “The Kleptomaniac” and “Their new paying guest,’” in the Somerville Mechanics’ Hall, in aid of the Red Cross Society. This entertainment was to have been held on the 22nd January last, but owing to the hall being wanted for a recruiting meeting, the management gracefully gave way, and postponed it till this evening, when it is hoped they will be greeted with a bumper house. It may be mentioned that the members of the Club are giving this entertainment free of any cost whatever to the society, so that if the pub-

lic act in a like patriotic spirit by their attendance, the society should benefit by a substantial amount being added to their funds. *** THE Eight Hours Committee announce elsewhere in this issue its Diamond Jubilee, being the 60th Annual Art Union, in which 100 prizes, of a total value of £1000 will be distributed. The first prize is valued at £500, the second £100 and the third £50. The support accorded the undertaking last year was so generous that the committee were enable to donate a very substantial sum to the hospitals and public charities, to which the proceeds are devoted. It will be the sixth celebration of the establishment of the system which enjoins “Eight hours’ labor, eight hours’ recreation, and eight hours’ rest.” The Committee has already made complete arrangements in connection with the Fete, which will be held at the Exhibition Buildings, Monday, 10th April. A splendid programme of sports and amusements has been arranged for Eight Hours Day, which has been declared a Public Holiday throughout the State. Numerous special attractions will be provided for adults and children, the latter being particularly well catered for in the shape of races for boys and girls of all ages, skipping contests, and other suitable events, and in addition, thousands of toys, skipping ropes, and bags of lollies will be given away free. The tickets are only one shilling

each, and may be purchased in almost every town in the State, or direct from the Secretary, Mr John Hyman, at the Trades Hall, Carlton. *** WE regret to report that word was received on Tuesday that Driver F. Benson, who left for the front with Colonel Tivey’s brigade, is seriously ill with appendicitis. Corporal Ted Reynolds is also in hospital in Egypt, suffering from poisoned arm, caused by inoculation. Later and more favorable reports are eagerly looked forward to. *** REFERRING yesterday to the insanitary conditions at the Victoria Markets, which were recently the subject of criticism in “The Age,” Dr T. W. Sinclair, city health officer, stated that, as the result of investigations by the health committee, it had been decided to take action to materially improve the prevailing conditions, which were certainly bad. *** FOUR boys presented themselves on Thursday at the Criminal Court to give evidence on a serious matter. They were successively asked by Mr Justice Hodges whether they understood their duty to tell the truth, and on replying in the affirmative they were questioned as to what would happen if they told lies. One said, “ I should have to go to gaol.” He was allowed to testify. The next bluntly affirmed “ I should have to go to hell.” His evidence was immediately accepted The third, speaking

with diffidence, offered the opinion, “ I should not go to heaven” and his depositions were taken. But the fourth boy sent the court into bursts of laughter by remarking, “I expect I should be sent to the John Murray.’ There was no objection to his testimony either. *** A very old resident of Frankston, in the person of Mrs Cattanach, passed away last Monday, the 14th inst. Mrs Cattanach was the widow of the late Thomas Cattanach J.P., who had been associated with Frankston and the Peninsula since a very early date, having had charge of the construction of the Frankston pier, as well as those at Schnapper Point (Mornington) Dromana, Portsea, and Philip Island. Mr Cattanach built at Frankston in 1880, and lived here until his death, Mrs Cattanach continuing her residence in the same house until the close of her life last Monday. The funeral was in accordance with the deceased [par]ty’s wish of an entirely private character. The deceased lady,who was in her 93rd year, was born in Scotland, and arrived in Victoria in 1853, coming out in the “Elizabeth”, a ship owned and sailed by Mrs Cattanach’s brother, Captain David Masterton. Mrs Cattanach was devotedly attended to by her nieces, while Dr Maxwell was unremitting in his care. Mrs Cattanach was interred in the family grave in Melbourne. *** From the pages of the Mornington Standard, 19 February, 1916

“Great for Singles, Couples and Families” Wear Neat Casual Clothes (with suitable shoes) - No need for anything fancy For mor information contact Jaden on 0401 186 831 or jadenfrigo@bigpond.com

New look dance form hits the peninsula It has taken Europe, America and Asia by storm and it’s already attracted thousands across Australia. Now one of Australia’s leading callers is bringing it to the Mornington Peninsula, giving locals a special chance to learn one of the world’s fastest growing dance forms - the new look square dancing. Despite its country roots, square dancing is now one of the most modern dance forms out there. You’ll love the variety of music with artists ranging from Elvis, The Beatles, ABBA, The Seekers, Elton John, Rod Stewart, Garth Brooks, Keith Urban, Samantha Jade, Taylor Swift and just about everyone in between. The best part is that the music is re-made and specially created for dancing so there is no loud or annoying music - it is all enjoyable to listen and dance to for all ages. Unlike other forms of dancing - the focus of square dancing isn’t on your footwork, which

means even if you have two left feet - you can still square dance. Everyone is made welcome - singles, couples and families. There are currently dancers around Melbourne ranging in age from 6 to 91, and just about every age in between. Learning the calls is very easy - all the teaching is done to music whilst you are dancing, so you actually don’t realise you are learning. The benefits of square dancing are huge. It gives you a gentle physical workout and an excellent mental challenge, but as you are enjoying yourself so much, you don’t feel like you’re exercising. A leading US researcher found that square dancing can add 10 years to your life. Everyone on the peninsula is encouraged to come along and take advantage of this special opportunity to learn. For more information contact Jaden on 0401 186 831.