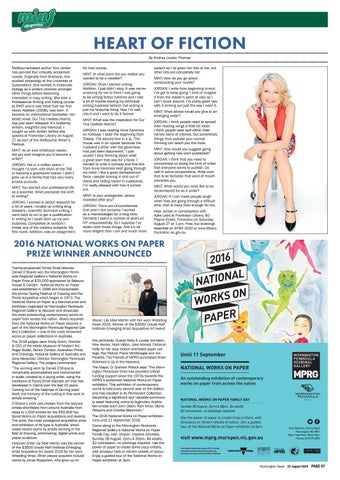 HEART OF FICTION By Andrea Louise Thomas Melbourne-based author Toni Jordan has penned four critically acclaimed novels. Originally from Brisbane, she studied physiology at the University of Queensland. She worked in molecular biology as a protein chemist amongst other things before becoming interested in copy writing. She took a Professional Writing and Editing course at RMIT and it was there that her first novel, Addition (2008), was born. It became an international bestseller. Her latest novel, Our Tiny Useless Hearts, has just been released. It’s brilliantly written, insightful and hilarious. I caught up with Jordan before she speaks at Frankston Library on August 27 as part of the Melbourne Writer’s Festival. MINT: As an avid childhood reader, did you ever imagine you’d become a writer? JORDAN: Not in a million years. I thought I’d work with Mum at the TAB or become a greyhound trainer. I didn’t grow up in a family that had very many artistic pursuits. MINT: You started your professional life as a scientist. What prompted the shift to writing? JORDAN: I worked in bench research for a lot of years. I ended up writing drug dossiers - scientific technical writing. I went back to uni to get a qualification in writing so I could start up my own business. Completely at random I chose one of the creative subjects. My first novel, Addition, was an assignment

for that course. MINT: At what point did you realize you wanted to be a novelist? JORDAN: Once I started writing Addition, I just didn’t stop. It was nervewracking for me to think I was going to be writing fiction full-time and I had a lot of trouble leaving my technical writing business behind, but writing is just my favourite thing. Now I’m well into it and I want to do it forever. MINT: What was the inspiration for Our Tiny Useless Hearts? JORDAN: I was reading Anna Karenina on holidays. I stole the beginning from Tolstoy. The second line in it is, ‘The house was in an uproar because the husband’s affair with the governess had just been discovered.’ I just couldn’t stop thinking about what a great start that was for a farce. I wanted to write a comedy and this line from Anna Karenina kept going through my mind. I like a good old-fashioned farce - people coming in and out of doors and hiding naked in cupboards. I’m really pleased with how it turned out. MINT: Is your protagonist, Janice modeled after you? JORDAN: There are circumstances that aren’t but certainly I worked as a microbiologist for a long time. Certainly I spent a number of years on IVF unsuccessfully. So I suppose I’ve stolen both those things. She’s a bit more diligent than I am and much more

patient so I’ve given her bits of me, but other bits are completely her. MINT: How do you go about constructing your novels? JORDAN: I write from beginning to end. I’ve got to keep going. I kind of imagine it from the reader’s point of view so I can’t muck around. I’m pretty good now with it coming out just the way I want it. MINT: What advice would you give to an emerging writer? JORDAN: I think people need to spread their reading wings a little bit wider. I think people read well within their narrow band of interest, but sometimes things from outside your normal thinking can teach you the most. MINT: How would you suggest going about getting new work published? JORDAN: I think that you need to concentrate on being the kind of writer that everyone wants to publish. Do well in some competitions. Write work that is so fantastic that word of mouth precedes you. MINT: What would you most like to be remembered for as a writer? JORDAN: If I can make people laugh when they are going through a difficult time, that is more than enough for me. Hear Jordan in conversation with Kylie Ladd at Frankston Library, 60 Playne Street, Frankston on Saturday, August 27 at 1 pm. Free, but bookings essential on 9784 1020 or www.library. frankston.vic.gov.au

2016 NATIONAL WORKS ON PAPER PRIZE WINNER ANNOUNCED Twenty-six-year-old Torres Strait Islander Daniel O’Shane won the Mornington Peninsula Regional Gallery’s National Works on Paper Prize of $15,000 sponsored by Beleura House & Garden. National Works on Paper was established in 1998 and incorporated the former Spring Festival of Drawing and the Prints Acquisitive which began in 1973. The National Works on Paper is a biennial prize and exhibition organised by Mornington Peninsula Regional Gallery to discover and showcase the most outstanding contemporary works on paper from across the nation. Works acquired from the National Works on Paper become a part of the Mornington Peninsula Regional Gallery’s collection – one of the most renowned works on paper collections in Australia. The 2016 judges were Kirsty Grant, Director & CEO of the Heide Museum of Modern Art; Roger Butler, Senior Curator, Australian Prints and Drawings, National Gallery of Australia and Jane Alexander, Director Mornington Peninsula Regional Gallery. The judges commented: “The winning work by Daniel O’Shane is remarkably accomplished and monumental in scale; created by a young artist, using the traditions of Torres Strait Islander art that has developed in Cairns over the last 20 years. Coming out of the histories of carving pearl shell, the intricacy of the cutting in this work is simply amazing.” O’Shane’s work was chosen from the sixty-six artists shortlisted from around Australia from close to 1,000 entries for the $50,000 National Works on Paper acquisitions and awards. The prize, the most prestigious acquisitive prize and exhibition of its type in Australia, showcases recent works by artists working in the field of drawing, printmaking, digital prints and paper sculpture. Victorian artist Lily Mae Martin was the winner of the $3500 Ursula Hoff Institute Emerging Artist Acquisitive Art Award 2016 for her work Wrestling three. Other pieces acquired include works by Jonas Ropponen, who grew up on

NATIONAL WORKS ON PAPER FAMILY DAY Sunday 28 August, 2pm–4.30pm, $4 adults, $2 concession, no bookings required Use the power of paper to create crazy critters, wild dinosaurs or vibrant wheels of colour. Join a guided tour of the National Works on Paper exhibition at 3pm.