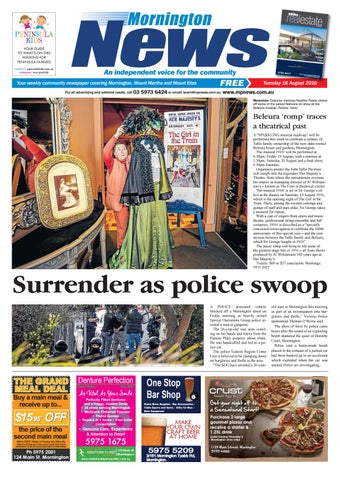 YOUR GUIDE TO WHATâ&#x20AC;&#x2122;S ON THIS WEEKEND FOR PENINSULA FAMILIES FACEBOOK:

5973 6424 or email: team@mpnews.com.au www.mpnews.com.au Memories: Costume mistress Heather Peake shows off some of the period fashions on show at the Beleura musical. Picture: Yanni

Beleura â&#x20AC;&#x2DC;rompâ&#x20AC;&#x2122; traces a theatrical past A â&#x20AC;&#x153;SPARKLING musical mash-upâ&#x20AC;? will be performed this week to celebrate a century of Tallis family ownership of the now state-owned Beleura house and gardens, Mornington. The musical 1916! will be performed at 6.30pm, Friday 19 August, with a matinee at 1.30pm, Saturday 20 August and a final show, 6.30pm Saturday. Organisers predict the John Tallis Pavilion will morph into the legendary Her Majestyâ&#x20AC;&#x2122;s Theatre, from where the entrepreneur oversaw his empire as managing director of JC Williamsonâ&#x20AC;&#x2122;s â&#x20AC;&#x201C; known as The Firm in theatrical circles. The musical 1916! is set in Sir Georgeâ&#x20AC;&#x2122;s office at the theatre on Saturday 19 August 1916, which is the opening night of The Girl in the Train. There, among the excited comings and goings of staff and stars alike, Sir George takes a moment for repose. With a cast of singers from opera and music theatre, professional string ensemble and full costumes, 1916! is described as a â&#x20AC;&#x153;specially concocted extravaganza to celebrate the 100th anniversary of this special year â&#x20AC;&#x201C; and the connection between the Tallis family and Beleura, which Sir George bought in 1916â&#x20AC;?. The pacey romp will bring to life some of the greatest stage hits of 1916 â&#x20AC;&#x201C; all from shows produced by JC Williamson 100 years ago at Her Majestyâ&#x20AC;&#x2122;s. Tickets: $60 or $55 concession. Bookings: 5975 2027

Surrender as police swoop A POLICE armoured vehicle blocked off a Mornington street on Friday morning as heavily armed Special Operations Group police arrested a man at gunpoint. The 26-year-old was seen crawling on his hands and knees from the Pamela Place property about 10am. He was handcuffed and led to a police car. The police Eastern Region Crime Unit is believed to be clamping down on burglaries and thefts in the area. â&#x20AC;&#x153;The SOG have arrested a 26-year-

26 As Vital As Your Smile

old man in Mornington this morning as part of an investigation into burglaries and thefts,â&#x20AC;? Victoria Police spokesman Thomas Oâ&#x20AC;&#x2122;Byrne said. The show of force by police came hours after the sound of an exploding bomb shattered the quiet of Dorothy Court, Mornington. Police said a home-made bomb placed in the exhaust of a parked car had been hooked up to an accelerant which exploded when the car was started. Police are investigating.