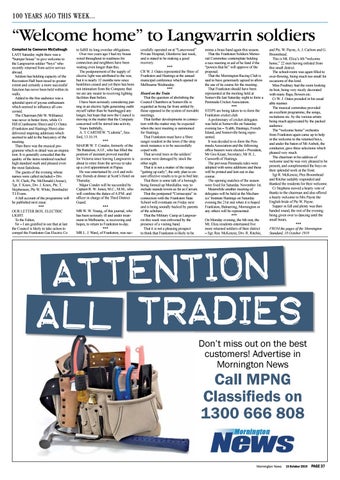 “Welcome home” to Langwarrin soldiers Compiled by Cameron McCullough LAST Saturday night there was a “bumper house” to give welcome to the Langwarrin soldier “boys” who recently returned from active service abroad. Seldom has holding capacity of the Recreation Hall been taxed to greater extent and certainly a more successful function has never been held within its walls. Added to the fine audience was a splendid spirit of joyous enthusiasm which seemed to influence all concerned. The Chairman (Mr W. Williams) was never in better form, while Cr Hill (Cranbourne Shire) and Cr Oates (Frankston and Hastings Shire) also delivered inspiring addresses which seemed to add to the buoyancy of the meeting. Then there was the musical programme which in detail was an inspiration. It is generally conceded that the quality of the items rendered reached high standard mark and pleased even the most fastidious. The guests of the evening whose names were called included:– Drv. A. H. Clark; Pte. McDonald (Anzac); Tpr. F. Knox; Drv. J. Knox; Pte. T. Stephenson; Pte W. White; Bombadier T.I Evans. A full account of the programme will be published next issue. *** OUR LETTER BOX. ELECTRIC LIGHT. To the Editor, Sir – I am gratified to see that at last the Council is likely to take action to compel the Frankston Gas Electric Co

to fulfill its long overdue obligations. Over two years ago I had my house wired throughout in readiness for connection and neighbors have been waiting even longer than this. The postponement of the supply of electric light was attributed to the war, but it is nearly 12 months now since hostilities ceased and yet there has been not intimation from the Company that we are any nearer to receiving lighting facilities than before. I have been seriously considering putting in an electric light generating outfit myself rather than be humbugged any longer, but hope that now the Council is moving in the matter that the Company concerned will be stirred into activity. Yours faithfully, A. T. CARTHEW. “Lialeeta”, Seaford, 13.10.19. *** MAJOR W. T. Condor, formerly of the 7th Battalion, A.I.F., who has filled the position of assistant provost marshal for Victoria since leaving Langwarrin is about to retire from the service to take up a civil appointment in Papua. He was entertained by civil and military friends at dinner at Scott’s Hotel on Thursday. Major Conder will be succeeded by Captain R. W. Jones, M.C., M.M., who will combine the duties of A.P.M. and officer in charge of the Third District Guard. *** MR W. W. Young, of this journal, who has been seriously ill and under treatment in Melbourne, is recovering and hopes, to return to Frankston to-day. *** MR L. J. Ward, of Frankston, was suc-

cessfully operated on at “Lancewood” Private Hospital, Glenferrie last week, and is stated to be making a good recovery. *** CR W. J. Oates represented the Shire of Frankston and Hastings at the annual municipal conference which opened in Melbourne Wednesday. *** Heard on the Train That the question of abolishing the Council Chambers at Somerville is regarded as being far from settled by those opposed to the system of movable meetings. That further developments in connection with the matter may be expected when the next meeting is summoned for Hastings. That Frankston must have a Shire ranger resident in the town if the stray stock nuisance is to be successfully coped with. That several trees in the soldiers’ avenue were damaged by stock the other night. That it is not a matter of the ranger “getting up early”, the only plan to ensure effective results is to go to bed late. That there is some talk of a borough being formed up Mordialloc way to include seaside towns as far as Carrum. That the postponed “Cornucopia” in connection with the Frankston State School will eventuate on Friday next and is being soundly backed by parents of the scholars. That the Military Camp at Langwarrin this week was enlivened by the presence of a visiting band. That it is not a pleasing prospect to think that Frankston is likely to be

minus a brass band again this season. That the Frankston Soldiers Memorial Committee contemplate holding a race meeting in aid of he fund if the “powers that be” will approve of the proposal. That the Mornington Racing Club is said to have generously agreed to allow the use of its course for the meeting. That Frankston should have been represented at the meeting held at Somerville last Saturday night to form a Peninsula Cricket Association. *** STEPS are being taken to re-form the Frankston cricket club. A preliminary of cricket delegates was held at Somerville on Saturday evening las – Tyabb, Hastings, French Island, and Somerville being represented. It was decided to re-form the Peninsula Association and the following office bearers were elected – President, Mr Geo Keast, Secretary; Mr H. L. Cusworth of Hastings. The previous Peninsula rules were adopted with some additions and these will be printed and lent out in due course. The opening matches of the season were fixed for Saturday November 1st. Meanwhile another meeting of delegates will be held at the Mechanics’ Institute Hastings on Saturday evening the 21st inst when it is hoped Frankston, Balnarring, Mornington or any others will be represented. *** On Monday evening, the 6th inst, the Mt. Eliza residents entertained five more returned soldiers of their district – Sgt. Roy McKenzie, Drv. R. Ritchie,

and Pts. W. Payne, A. J. Carlron and G. Broomhead. This is Mt. Eliza’s 4th “welcome home,” 22 men having enlisted from this small district. The school-room was again filled to over-flowing, being much too small for occasions of this kind. Miss Poultney had the room looking its best, being very nicely decorated with many flags, flowers etc. Cr W. J. Oates presided in his usual able manner. The musical committee provided an excellent programme, the songs, recitations etc. by the various artists being much appreciated by the packed audience. The “welcome home” orchestra from Frankston again came up to help in the welcome to the returned boys, and under the baton of Mr Aisbett, the conductor, gave three selections which pleased very much. The chairman in his address of welcome said he was very pleased to be present, and complimented the boys on their splendid work at the front. Sgt R. McKenzie, Ptes Broomhead and Ritchie suitably responded and thanked the residents for their welcome. Cr Stephens moved a hearty vote of thanks to the chairman and also offered a hearty welcome to Mrs Payne the English bride of Pte W. Payne. Supper in full and plenty was then handed round, the rest of the evening being given over to dancing until the small hours. *** FROM the pages of the Mornington Standard, 18 October 1919