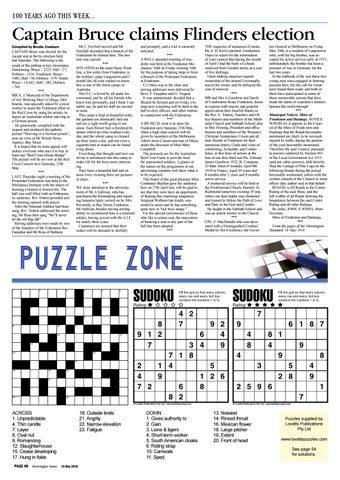 Captain Bruce claims Flinders election Compiled by Brodie Cowburn CAPTAIN Bruce was elected for the vacant seat at the by-election held last Saturday. The following is the result of the polling in key electorates: Dandenong: Bruce - 2225, Hall - 27, Holmes - 1216. Frankston: Bruce 1483, Hall - 30, Holmes - 479. Totals: Bruce - 14,445, Hall - 382, Holmes - 740. *** MR A. J. Munyard of the Department of Art, Working Men’s College, Melbourne, was specially asked by a local worker to assist the Frankston effort to the Red Cross by using his artistry to depict an Australian soldier starving in a German prison. He generously complied with the request and produced the pathetic picture “Starving in a German prison”, now on view at Mr Woods News Agency, Bay Street. It is hoped that its mute appeal will induce everyone who sees it to buy at least one “Red Cross House Badge”. The picture will be on view at the Red Cross Concert next Saturday, 25th May. *** LAST Thursday night a meeting of the Protestant Federation was held in the Mechanics Institute with the object of forming a branch in Somerville. The hall was well filled with an Enthusiastic audience. Rev Tonkin presided and the meeting opened with prayer. After the National Anthem had been sung, Rev. Tonkin addressed the meeting. Mr Ross then sang ”We’ll never let the old flag fall” Stirring addresses were made by two of the founders of the Federation Rev. Farquhar and Mr Ross of Ballarat.

Mr J. Twyford moved and Mr Horsfall seconded that a branch of the Federation be formed here. The motion was carried. *** SITUATED on the main Stony Point line, a few miles from Frankston, is the military camp Langwarrin and I would like all your readers to know this is one of the finest camps in Australia. The O.C. is loved by all under his command, and by all his friends who know him personally, and I think I can safely say, he and his staff are second to none. This camp is kept in beautiful order; the gardens are artistically laid out and are a sight worth going to see alone. Each flower bed is bordered by stones which are lime washed every day, and the whole camp is cleaned up three times a day. and not even a cigarette butt or match can be found lying about. Everything that thought and love can divise is introduced into this camp to make life for the boys more interesting. They have a beautiful hall and almost every evening there are pictures or plays. *** WE draw attention to the advertisement of Mr A Sullivan, who has purchased the bootmaking and repairing business lately carried on by Mrs Reynolds, in Bay Street, Frankston . Mr Sullivan, besides having stirling ability to recommend him is a returned soldier, having served with the A.I.F. for nearly three years. Customers are assured that their orders will be attended to skilfully

and promptly, and a trial is earnestly solicited. *** A WELL attended meeting of residents was held at the Frankston Mechanics’ Hall on Friday evening 10th for the purpose of taking steps to form a Branch of the Protestant Federation at Frankston. Cr. Oates was in the chair and stirring addresses were delivered by Revs. F. Farquhar and G. Tregear. It was unanimously decided that a Branch be formed and on Friday evening next a meeting will be held in the hall to elect officers, and other routine in connection with the Federation. *** A MUSICAL treat is in store for Frankston next Saturday 25th May, when a high class concert will be given by members of the Melbourne Albert street Conservatorium of Music under the direction of Miss Mary Campbell. The proceeds are for the Australian Red Cross Fund, to provide food for imprisoned soldiers. A glance at the names on the programme in our advertising columns will show what is to be expected. This board of the great pleasure Miss Constance Buchan gave her audience here on 27th April last, will be glad to see that they now have an opportunity of hearing this charming songstress. Sergeant Widburn has kindly consented to assist and he has something quite new in “our boys songs.” For the special convenience of those who like a certain seat, the innovation of booking a seat in any part of the hall has been adopted. ***

THE inspector of nuisances (Constable A. D. Kerr) reported: Gentlemen, I have to report for the information of your council that during the month of April I had the body of a beast removed from Gordon street, at a cost of five shillings. Upon making inquiries regards ownership of the animal I eventually traced the owner, and he defrayed the cost of removal. *** MR and Mrs A Goodwin and family of Cranbourne Road, Frankston, desire to express with sincere and grateful appreciation their hearfelt thanks to the Rev. E. Tonkin, Teachers and Office bearers and members of the Methodist Church and Sabbath School, also to Mrs Twining, President and office bearers and members of the Woman’s Christian Temperance Union and all dear friends in Frankston for their numerous letters, Cards and visits of comforting, Sympathy and Condolence, in this hour of sorrow at the loss of our dear third son Pte. Edward James Goodwin 1932, B. Company, 23 Batt. Died of wounds, April 8th 1918 in France. Aged 20 years and 8 months after 2 years and 8 months active service. A memorial service will be held in the Presbyterian Church, Burnley St. Richmond tomorrow evening 19 inst, where our dear laddie was chistened and trained to follow the Path of Love and Duty to his God and Country. He taught in the Sabbath School and was an ardent worker in the Church. *** CPL. F. MacDonald who was decorated with a Distinguished Conduct Medal by His Excellency the Gover-

nor General at Melbourne on Friday May 10th, is a resident of Langwarrin who, with his big brother, was accepted for active service early in 1915; unfortunately the brother has been a prisoner of war in Germany for the last two years. At the outbreak of the war these two young men were engaged in farming pursuits here, but the call for volunteers found them ready and both of them have participated in some of those memorable actions that have made the name of Australia’s soldiers famous the world through *** Municipal Notices. Shire of Frankston and Hastings. NOTICE. WHEREAS it appears to the Council of the Shire of Frank ston and Hastings that the Roads hereinafter mentioned are likely to be seriously injured by traffic during the portion of the year hereinafter mentioned. Therefore the said Council, pursuant to powers conferred by Section 493 of the Local Government Act 1915 (and any other powers), doth herreby Stop the Cartage of Pine Logs on the following Roads during the period hereinafter mentioned, unless with the written consent of the Council or some officer duty author ised in that behalf. ROADS.—All Roads in the Centre Riding of the said Shire, and the full widths of all Roads forming the boundaries between the said Centre Riding and all other Ridings. By order, JOHN. E JONES, Shire Secretary. Shire of Frankston and Hastings, *** From the pages of the Mornington Standard, 18 May 1918