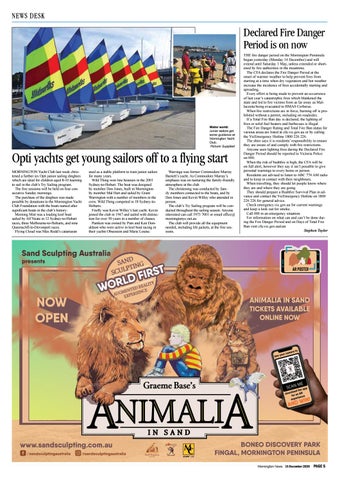 Opti yachts get young sailors off to a flying start MORNINGTON Yacht Club last week christened a further six Opti junior sailing dinghies which are ideal for children aged 8-10 learning to sail in the club’s Try Sailing program. The free sessions will be held on four consecutive Sunday mornings. The purchase of the dinghies was made possible by donations to the Mornington Yacht Club Foundation with the boats named after significant boats in the club’s history: Morning Mist was a leading keel boat sailed by Alf Neate in 12 Sydney-to-Hobart races, three Melbourne-to-Hobarts, and nine Queenscliff-to-Devonport races. Flying Cloud was Max Rodd’s catamaran

used as a stable platform to train junior sailors for many years. Wild Thing won line honours in the 2001 Sydney-to-Hobart. The boat was designed by member Don Jones, built in Mornington by member Mal Hart and sailed by Grant Warrington with a number of members in the crew. Wild Thing competed in 18 Sydney-toHobarts. Firefly was Kevin Willey’s last yacht. Kevin joined the club in 1947 and sailed with distinction for over 50 years in a number of classes. Pamken was owned by Pam and Ken Donaldson who were active in keel boat racing in their yachts Obsession and Marie Louise.

Warringa was former Commodore Murray Barnett’s yacht. As Commodore Murray’s emphasis was on nurturing the family-friendly atmosphere at the club. The christening was conducted by family members connected to the boats, and by Don Jones and Kevin Willey who attended in person. The club’s Try Sailing program will be conducted throughout the sailing season. Anyone interested can call 5975 7001 or email office@ morningtonyc.net.au The club will provide all the equipment needed, including life jackets, at the free sessions.

THE fire danger period on the Mornington Peninsula began yesterday (Monday 14 December) and will extend until Saturday 1 May, unless extended or shortened by fire authorities in the meantime. The CFA declares the Fire Danger Period at the onset of warmer weather to help prevent fires from starting at a time when dry vegetation and hot weather increase the incidence of fires accidentally starting and spreading. Every effort is being made to prevent an occurrence of last year’s catastrophic fires which blanketed the state and led to fire victims from as far away as Mallacoota being evacuated to HMAS Cerberus. When fire restrictions are in force, burning off is prohibited without a permit, including on roadsides. If a Total Fire Ban day is declared, the lighting of fires or solid fuel heaters and barbecues is illegal. The Fire Danger Rating and Total Fire Ban status for various areas are listed at cfa.vic.gov.au or by calling the VicEmergency Hotline 1800 226 226. The shire says it is residents’ responsibility to ensure they are aware of and comply with fire restrictions. Anyone seen lighting fires during the Declared Fire Danger Period should be reported to Victoria Police on 000. When the risk of bushfire is high, the CFA will be on full alert, however they say it isn’t possible to give personal warnings to every home or person. Residents are advised to listen to ABC 774 AM radio and to keep in contact with their neighbours. When travelling, they should let people know where they are and where they are going. They should prepare a Bushfire Survival Plan in advance and contact the VicEmergency Hotline on 1800 226 226 for general advice. Check emergency.vic.gov.au for current warnings and keep a look out for smoke. Call 000 in an emergency situation. For information on what can and can’t be done during the Fire Danger Period and on Days of Total Fire Ban visit cfa.vic.gov.au/can Stephen Taylor