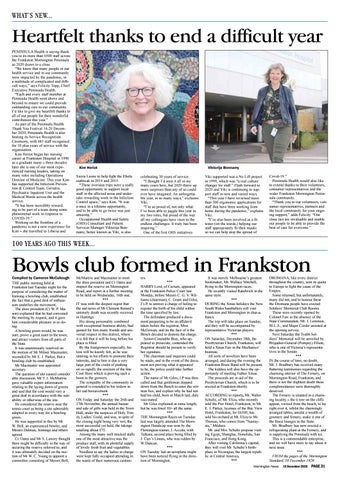 Heartfelt thanks to end a difficult year PENINSULA Health is saying thank you to its more than 6500 staff across the Frankston Mornington Peninsula as 2020 draws to a close. “We know that many people in our health service and in our community were impacted by the pandemic, in a multitude of complicated and difficult ways,” says Felicity Topp, Chief Executive Peninsula Health. “Each and every staff member at Peninsula Health went above and beyond to ensure we could provide outstanding care to our community. I’d like to give my heartfelt thanks to all of our people for their wonderful contribution this year.” As part of the Peninsula Health Thank You Festival 14-20 December 2020, Peninsula Health is also hosting its Service Recognition Ceremony, with 485 staff recognised for 10 plus years of service with the organisation. Kim Heriot began her nursing career at Frankston Hospital in 1990 as a graduate nurse – three decades later she is one of our most experienced nursing leaders, taking on many roles including Operations Director of Medicine. This year Kim has supported the Infection Prevention & Control Team, Geriatric Psychiatric Inpatient Unit and the Medical Wards across the health service. “It has been incredibly rewarding to be part of a team doing some phenomenal work in response to COVID-19.” Working on the frontline of a pandemic is not a new experience for Kim – she travelled to Liberia and

Kim Heriot Sierra Leone to help fight the Ebola outbreak in 2014 and 2015. “These overseas trips were a really good opportunity to support local staff in the affected areas and undertake rewarding work in the Infection Control space,” says Kim. “It was a once in a lifetime opportunity, and to be able to go twice was just amazing.” Occupational Health and Safety (OHS) Consultant and Patient Services Manager Viktorija Bonnamy, better known as Viki, is also

Viktorija Bonnamy celebrating 30 years of service. “I thought I’d seen it all in my many years here, but 2020 threw up more surprises than any of us could ever have imagined. An unforgettable year, in so many ways,” exclaims Viki. “I’m so proud of, not only what I’ve been able to juggle this year in my two roles, but proud of the way all my colleagues have risen to the endless challenges. It truly has been inspiring.” One of the first OHS initiatives

Viki supported was a No Lift project in 1999, which was “a real culture changer for staff.” Flash forward to 2020 and Viki is continuing to support staff in new and varied ways. “This year I have reviewed more than 500 ergonomic applications for staff that have been working from home during the pandemic,” explains Viki. “I’ve also been involved as a fit tester (on the wards,) helping our staff appropriately fit their masks so we can help stop the spread of

Covid-19.” Peninsula Health would also like to extend thanks to their volunteers, consumer representatives and the wider Frankston Mornington Peninsula community. “Thank you to our volunteers, consumer representatives, partners and the local community for your ongoing support,” adds Felicity. “Our close ties are invaluable and enable our people to be able to provide the best of care for everyone.”

Compiled by Cameron McCullough THE public meeting held at Frankston last Tuesday night for the purpose of considering the matter of forming a bowling club, established the fact that a good deal of enthusiasm underlies the movement. The shire president (Cr W. P. Mason) explained that he had convened the meeting by request, and it gave him considerable pleasure in so doing. A bowling green would, he was sure, prove a great asset to the town, and attract visitors from all parts of the State. It was unanimously resolved on the motion of Mr Milner Macmaster, seconded by Mr E. J. Parker, that a bowling club be established. Mr Macmaster was appointed secretary. The question of site caused consider able discussion. Mr T. J. McMurtrie gave valuable expert information relating to the laying down of greens and said that the cost would vary a great deal in accordance with the suitability or otherwise of the site. He considered the reserve near the tennis court as being a site admirably adapted in every way for a bowling green. He was supported in this by Mr W. Bell, an experienced bowler, and Messrs Dalman, Jennings and others agreed. Cr. Oates and Mr S. Lawrey thought there might be difficulty in the way of securing the reserve referred to, and it was ultimately decided on the motion of Mr W. C. Young to appoint a committee consisting of Messrs BelI,

McMurtrie and Macmaster to meet the shire president and Cr Oates and inspect the reserve on Mornington Road, and report at a further meeting to be held on Wednesday, 16th inst. *** IT was with the deepest regret that the sad news of Mr Clement Renard’s untimely death was recently received in Hastings. His strong personality combined with exceptional business ability, had gained for him many friends and universal respect in this district, where it is felt that it will be long before his place is filled. By the fruitgrowers especially, his loss will be keenly felt, as he was untiring in his efforts to promote their interests, and to him is due a very large part of the credit of pushing on so rapidly the erection of the fine Cool Store which is proving such a boon to the growers. The sympathy of the community in general is extended to his widow in her sad bereavement. *** ON Friday and Saturday the 26th and 27th November, the annual bazaar and sale of gifts was held in the Town Hall, under the auspices of Holy Trinity Ladies’ Guild, and was, in spite of the closing night being very wet, the most successful yet held, the takings totalling about £72. Among the many well stocked stalls one of the most attractive was the produce stall, with its plentiful supply of lovely fresh fruit and vegetables. Needless to say the ladies in charge were kept fully occupied attending to the wants of their numerous custom-

*** HARRY Lord, of Carrum, appeared at the Frankston Police Court last Monday, before Messrs C. G. V. Williams (chairman), C. Grant and Giles, J’s.P, to answer a charge of failing to register the birth of his child within the time specified by law. The defendant produced a document purporting to be an affidavit taken before the registrar, Miss McGowan, and on the face of it the Bench decided to dismiss the charge. Senior-Constable Bray, who appeared to prosecute, contended the Registrar should be present to verify her signature. The chairman said inquiries could he made, and in the event of the document not proving what it appeared to be, the police could take further action. The name of Mr Giles, J.P was then called and that gentleman stepped down from the Bench to enter the witness box, and explain why he had not had his child, born in March last, duly vaccinated. Mr Giles explained at some length, but he was fined 10/- all the same. *** THE Mornington Races on Tuesday last was largely attended The Mornington Handicap was won by the Flemington trainer, J. Accola, with Tulkara, second place being filled by J. Curr’s Linass, who was ridden by W Duncan. *** ON Tuesday last an aeroplane might have been noticed flying in the direction of Mornington.

It was merely Melbourne’s greatest bookmaker, Mr. Wallace Mitchell, flying to the Mornington races. He recently visited Randwick in the same style. *** DURING the Xmas holidays the New South Wales baseballers will visit Frankston and Mornington in char-abancs. The trip will take place on Sunday, and they will be accompanied by representative Victorian players. *** ON Saturday, December 18th, the Presbyterian Church, Frankston, will hold a Xmas Fair in the Mechanics’ Institute. All sorts of novelties have been arranged, and during the evening the Frankston Brass Band will be present. The kiddies will also have the opportunity of meeting Father Xmas. The proceeds are in aid of the Presbyterian Church, which is to be erected at Frankston shortly. *** ACCORDING to reports, Mr. Walter Schultz, of Mt. Eliza, who recently sold the Pier Hotel, Frankston, to Mr. E. J. Parker, licensee of the Bay View Hotel, Frankston, for £6500, has sold his orchard at Mt. Eliza to Mr. Thomas, who comes from “Sunraysia,” Mildura. Mr. and Mrs. Schultz propose visiting Egypt, Shanghai, Honolulu, San Francisco, and Hong Kong. After visiting California’s capital, they will visit Mr. Schultz’s birthplace in Nicaragua, the largest republic in Central America. ***

DROMANA, like every district throughout the country, sent its quota to Europe to fight the cause of the Empire. Some returned, but unfortunately, many did not, and to honour these the Dromana people have erected Soldiers’ Memorial Club Rooms. These were recently opened by Colonel Farr in the absence of the State Commandant. Mr. J. Lemmon, M.L.A., and Major Corder assisted at the opening service. Next Saturday the Tyabb Soldiers’ Memorial will be unveiled by Brigadier-General (Pompey) Elliott, who is one of Victoria’s representatives in the Senate. *** IN the course of time, no doubt, Mr. J. Bradbury has received many flattering testimonies regarding the charming interior of The Fernery, on Mornington Road, Frankston, and there is not the slightest doubt these complimentaries were thoroughly deserved. The Fernery is situated in a charming locality – the ti tree on the cliffs appear, viewed from the beach, to lay right over it, whilst the charmingly arranged tables, amidst a wealth of greenery and fernery, make it one of the finest lounges in the State. Mr. Bradbury has now erected a refrigerating plant at the Fernery, and is supplying the Peninsula with ice. This is a commendable enterprise, and we will have more to say about it next issue. *** FROM the pages of the Mornington Standard, 10 December 1920