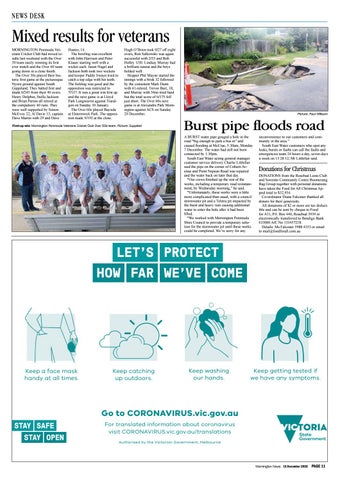 Mixed results for veterans MORNINGTON Peninsula Veterans Cricket Club had mixed results last weekend with the Over 50 team easily winning its first ever match and the Over 60 team going down in a close finish. The Over 50s played their historic first game at the picturesque Nyora ground against South Gippsland. They batted first and made 6/245 from their 40 overs. Henry Dolphin, Stella Jackson and Brian Parton all retired at the compulsory 40 runs. They were well supported by Simon McEvoy 22, Al Davie 15, captain Dave Martin with 29 and Dave

Hunter, 14. The bowling was excellent with John Harrison and Peter Klauer starting well with a wicket each. Jason Nagel and Jackson both took two wickets and keeper Paddy Swayn tried to catch a top edge with his teeth. The fielding was good and the opposition was restricted to 7/137. It was a great win first up and the next game is at Lloyd Park Langwarrin against Traralgon on Sunday 10 January. The Over 60s played Bayside at Elsternwick Park. The opposition made 5/192 at the close.

Hugh O’Brien took 0/27 off eight overs, Ron Salkowski was again successful with 2/33 and Bob Holley 1/30. Lindsay Murray had a brilliant runout and the boys fielded well. Skipper Phil Mayne started the innings with a brisk 32 followed by the consistent Mark Dunn with 41-retired. Trevor Burt, 18, and Murray with 34no tried hard but the total score of 6/175 fell just short. The Over 60s next game is at Alexandra Park Mornington against ACS on Sunday 20 December.

Burst pipe floods road A BURST water pipe gouged a hole in the road “big enough to park a bus in” and caused flooding at McCrae, 5.30am, Monday 7 December. The water had still not been connected by 1.30pm. South East Water acting general manager customer service delivery Charlie Littlefair said the pipe on the corner of Coburn Avenue and Point Nepean Road was repaired and the water back on later that day. “Our crews finished up the rest of the works, including a temporary road reinstatement, by Wednesday morning,” he said. “Unfortunately, these works were a little more complicated than usual, with a council stormwater pit and a Telstra pit impacted by the burst and heavy rain causing additional water to enter the hole after it had been filled. “We worked with Mornington Peninsula Shire Council to provide a temporary solution for the stormwater pit until these works could be completed. We’re sorry for any

inconvenience to our customers and community in the area.” South East Water customers who spot any leaks, bursts or faults can call the faults and emergencies team 24 hours a day, seven days a week on 13 28 12, Mr Littlefair said.

DONATIONS from the Rosebud Lions Club and Sorrento Community Centre Boomerang Bag Group together with personal donations have taken the Food for All Christmas Appeal total to $32,954. Co-ordinator Diane Falconer thanked all donors for their generosity. All donations of $2 or more are tax deductible and can be sent by cheque to Food for A11, P.0. Box 440, Rosebud 3939 or electronically transferred to Bendigo Bank 633000 A/C No 133457218. Details: Ms Falconer 5988 4353 or email to mail@foodforall.com.au

Keep a face mask handy at all times.

Keep getting tested if we have any symptoms.