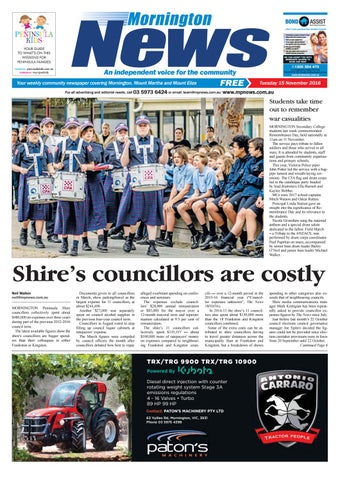 Students take time out to remember war casualities MORNINGTON Secondary College students last week commemorated Remembrance Day, held nationally at 11am on 11 November. The service pays tribute to fallen soldiers and those who served in all wars. It is attended by students, staff and guests from community organisations and primary schools. This year, Victoria Police piper John Potter led the service with a bagpipe lament and wreath-laying ceremony. The CFA flag and drum corps led in the catafalque party headed by lead drummers Ella Burnett and Kaylee Webber. MCs were 2017 school captains Mitch Watson and Oskar Rutten. Principal Linda Station gave an insight into the significance of Remembrance Day and its relevance to the students. Nicole Grimshaw sang the national anthem and a special drum salute dedicated to the fallen: Field March – a Tribute to the ANZACS, was performed by drum corps coordinator Paul Papettas on snare, accompanied by senior bass drum leader Bailey O’Neil and junior bass leader Michael Walker.

Shire’s councillors are costly Neil Walker neil@mpnews.com.au MORNINGTON Peninsula Shire councillors collectively spent about $480,000 on expenses over three years during part of the previous 2012-2016 council term. The latest available figures show the shire's councillors are bigger spenders than their colleagues in either Frankston or Kingston.

Documents given to all councillors in March, show parking/travel as the largest expense for 11 councillors, at about $244,400. Another $27,000 was separately spent on council alcohol supplies in the previous four-year council term. Councillors in August voted to stop filling up council liquor cabinets at ratepayers’ expense. The March figures were compiled by council officers the month after councillors debated how best to repay

alleged exorbitant spending on conferences and seminars. The expenses exclude councillors’ $28,000 annual remuneration or $85,000 for the mayor over a 12-month mayoral term and superannuation calculated at 9.5 per cent of remuneration. The shire’s 11 councillors collectively spent $135,357 — about $100,000 more of ratepayers’ money on expenses compared to neighbouring Frankston and Kingston coun-

cils — over a 12-month period in the 2015-16 financial year (“Councillor expenses unknown”, The News 18/10/16). In 2014-15 the shire’s 11 councillors also spent about $150,000 more than the 18 Frankston and Kingston councillors combined. Some of the extra costs can be attributed to shire councillors having to travel greater distances across the municipality than at Frankston and Kingston, but a breakdown of shows

spending in other categories also exceeds that of neighbouring councils. Shire media communications manager Mark Kestigian has been repeatedly asked to provide councillor expenses figures by The News since July. Just before last month’s 22 October council elections council governance manager Joe Spiteri decided the figures could not be provided since election caretaker provisions were in force from 20 September until 22 October. Continued Page 6