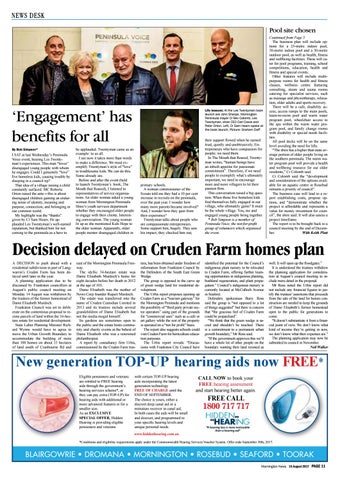 ‘Engagement’ has benefits for all By Bob Simpson*

I SAT at last Wednesday’s Peninsula Voice event, hearing Les Twentyman’s experiences. This man “loves” disengaged young people with whom he engages. Could I genuinely “love” five homeless kids, causing trouble by sleeping in a council tip? That idea of a village raising a child constantly surfaced. MC Roberta Orton raised the ante – this is about disengaged children gaining an enduring sense of identity, meaning and purpose, connection, and belonging in our common world. My highlight was the “thanks” given by Cr Sam Hearn. He applauded Les Twentyman’s well-earned reputation; but thanked him for not coming to the peninsula as a hero to

be applauded. Twentyman came as an example: to us all. I see now it takes more than words to make a difference. We must exemplify Twentyman’s style of “love” to troublesome kids. We can do this. Some already are. Before and after the event (held to launch Twentyman’s book, The Mouth that Roared), I listened to representatives of service organisations. An older woman asked a young woman from Mornington Peninsula Shire’s youth services department whether they encouraged older people to engage with their clients. Interesting conversation. The young woman lit up as she mentioned Kids Hope to the older woman. Apparently, older people mentor disengaged children in

primary schools. A woman commissioner of the Scouts told me they had a 10 per cent increase in recruits on the peninsula, over the past year. I wonder how many more parents became involved? And, I wonder how they gain from their experience? Twentyman talks about people who are compassionate entrepreneurs. Some support him, hugely. They saw his impact; they checked him out;

their support flowed when he earned trust; quietly and unobtrusively. Entrepreneurs who have compassion for people; we need them. In The Mouth that Roared, Twentyman writes, “human beings have an inbuilt appetite for passionate commitment”. Therefore, if we need people to exemplify what’s ultimately important, we need to encourage more and more villagers to let their passion flow. This conversation raised a big question. When those five homeless kids find themselves fully engaged in our village, who ultimately gains? It must be the whole village. You, me and engaged young people being together. * Bob Simpson is a member of Peninsula Voice, the not-for-profit group of volunteers which organised the event.

Continued from Page 5 The business plan will include options for a 25-metre indoor pool, 50-metre indoor pool and a 50-metre outdoor pool, as well as health, fitness and wellbeing facilities. These will cater for pool programs, training, school competitions, education, health and fitness and special events. Other features will include multipurpose rooms for health and fitness classes, wellness centre featuring consulting, steam and sauna rooms catering for specialist services, such as massage and physiotherapy, relaxation, older adults and sports recovery. There will be a cafe, disability access, access ramps to the main pools, learn-to-swim pool and warm water program pool, wheelchair access to the spa within the warm water program pool, and family change rooms with disability or special needs facilities. All pool decks will be on the same level avoiding the need for lifts. “The shire has a higher than state average portion of older people living on the southern peninsula. The warm water program pool will provide a health and wellbeing resource for our older residents,” Cr Colomb said. Cr Colomb said the “development and consideration of the options available for an aquatic centre in Rosebud remains a priority of council”. The business case will lead to a report establishing costs, propose options, and “demonstrate whether the project is affordable and represents a value for money investment for council”, the shire said. It will also assess a project timeframe. The report is to be brought back to a council meeting by the end of December. With Keith Platt

Decision delayed on Cruden Farm homes plan A DECISION to push ahead with a residential subdivision in part of Langwarrin’s Cruden Farm has been delayed until later in the year. A planning application due to be discussed by Frankston councillors at August’s public council meeting on Monday 14 August was withdrawn by the trustees of the former homestead of Dame Elisabeth Murdoch. Frankston Council was set to deliberate on the contentious proposal to rezone parcels of land within the 54-hectare estate for residential development. State Labor Planning Minister Richard Wynne would have to agree to move the Urban Growth Boundary to accommodate the building of more than 100 homes on about 15 hectares of land south of Cranbourne Rd and

east of the Mornington Peninsula Freeway. The idyllic 54-hectare estate was Dame Elisabeth Murdoch’s home for eight decades before her death in 2012 at the age of 103. Dame Elisabeth was the mother of News Corp founder Rupert Murdoch. The estate was transferred into the name of Cruden Custodian Limited in 2013 and its trustees include several grandchildren of Dame Elisabeth but not the media mogul himself. Its gardens are sometimes open to the public and the estate hosts community and charity events at the behest of Dame Elisabeth who was a renowned philanthropist. A report by consultancy firm Urbis, commissioned by the Cruden Farm trus-

tees, has been obtained under freedom of information from Frankston Council by the Defenders of the South East Green Wedge. The group is opposed to the carve up of green wedge land for residential development. The Urbis report proposes opening up Cruden Farm as a “tourism gateway” for the Mornington Peninsula and mentions the possibility of “third party private sector operators” using part of the grounds for “commercial uses” such as a cafe or art gallery while the rest of the property is operated on a “not for profit” basis. The report also suggests schools could visit Cruden Farm for horticulture education purposes. The Urbis report reveals: “Discussions with Frankston City Council have

identified the potential for the Council’s indigenous plant nursery to be relocated to Cruden Farm, offering further learning opportunities in indigenous planting, bushland regeneration, and plant propagation.” Council’s indigenous nursery is currently located at McCulloch Avenue in Seaford. Defenders spokesman Barry Ross said the group is “not opposed to a lot of things suggested” but there is concern that “the gracious feel of Cruden Farm could be jeopardised”. “We think that the green wedge is sacred and shouldn’t be touched. There is a commitment to a permanent urban growth boundary,” Mr Ross said. “If the government approves this we’ll have a whole lot of other people on the boundary wanting their land rezoned as

well. It will open up the floodgates.” It is understood the trustees withdrew the planning application for consideration at August’s council meeting to include more detail in the proposal. Mr Ross noted the Urbis report did not include any financial figures to justify the trustees’ assertions that proceeds from the sale of the land for homes construction are needed to keep the grounds of Dame Elisabeth’s former homestead open to the public for generations to come. “It doesn’t substantiate it from a financial point of view. We don’t know what kind of income they’re getting in now, we don’t know what their expenses are.” The planning application may now be submitted to council in November. Neil Walker

with certain TOP-UP hearing aids incorporating the latest generation technology FREE OF CHARGE until the END OF SEPTEMBER. The choice is yours, either a discreet deep canal aid or a miniature receiver in canal aid. In both cases the aids will be small and discreet, and programmed to your specific hearing levels and unique personal needs. www.hiddenhearing.com.au