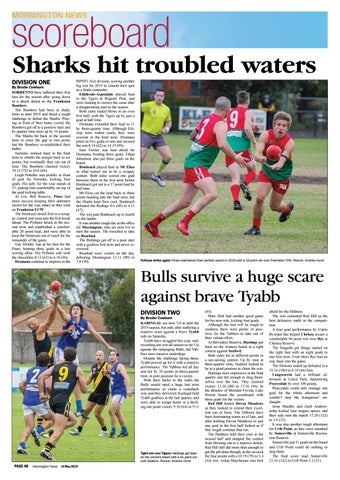 By Brodie Cowburn SORRENTO have suffered their first loss for the season after going down in a shock defeat to the Frankston Bombers. The Bombers had been in shaky form to start 2019 and faced a tough challenge to defeat the Sharks. Playing in front of their home crowd, the Bombers got off to a positive start and by quarter time were up by 16 points. The Sharks bit back in the second term to close the gap to two point, but the Bombers re-established their buffer. Sorrento worked hard in the final term to whittle the margin back to six points, but eventually they ran out of time. The Bombers claimed victory 10.12 (72) to 10.6 (66). Leigh Poholke was prolific in front of goal for Sorrento, kicking four goals. His tally for the year stands at 27, putting him comfortably on top of the goal kicking table. At Eric Bell Reserve, Pines had more success keeping their unbeaten record for the year intact as they took on Frankston YCW. The Stonecats struck first in a scrappy contest and went into the first break ahead. The Pythons struck in the second term and established a comfortable 20 point lead, and were able to keep the Stonecats out of reach for the remainder of the game. Guy Hendry was at his best for the Pines, booting three goals in a low scoring affair. His Pythons side took the chocolates 8.13 (61) to 6.10 (46). Dromana continue to impress in the

MPNFL first division, scoring another big win for 2019 to cement their spot as a finals contender. Edithvale-Aspendale played host to the Tigers at Regents Park, and were looking to correct the curse after a disappointing start to the season. Both sides traded blows in an even first half, with the Tigers up by just a goal at half time. Dromana extended their lead to 11 by three-quarter time. Although EdiAsp were within reach, they were overrun in the final term. Dromana piled on five goals to one and secured the win 8.14 (62) to 14.15 (99). Sam Fowler was best afield for Dromana, booting three goals. Ethan Johnstone also put three goals on the board. Bonbeach played host to Mt Eliza in what turned out to be a scrappy contest. Both sides scored one goal between them in the first term before Bonbeach got out to a 17 point lead by half time. Mt Eliza cut the lead back to three points heading into the final term, but the Sharks kept their cool. Bonbeach defeated the Redlegs 9.6 (60) to 6.11 (47). The win puts Bonbeach up to fourth on the ladder. It was another tough day at the office for Mornington, who are now 0-6 to start the season. The travelled to take on Rosebud. The Bulldogs got off to a poor start with a goalless first term and never recovered. Rosebud were victors on the day, defeating Mornington 13.11 (89) to 7.8 (50).

By Brodie Cowburn KARINGAL are now 7-0 to start the 2019 season, but only after suffering a massive scare against a brave Tyabb side on Saturday. Tyabb have struggled this year, only recording one win all season so far. Up against the rampaging Bulls, the Yabbies were massive underdogs. Despite the challenge facing them, Tyabb proved up for it with a massive performance. The Yabbies led all day and led by 20 points at three-quarter time, in pole position for a victory. With their backs to the walls the Bulls would need a huge last term performance to claim a comeback win, and they delivered. Karingal held Tyabb goalless in the last quarter, and were able to scrape home in a thrilling one point victory 9.10 (64) to 9.11

Tight win over Tigers: Hastings got back on the winners board with a six point win over Seaford. Picture: Andrew Hurst

(65). Marc Holt had another good game for his new side, kicking four goals. Although the loss will be tough to swallow, there were plenty of positives for the Yabbies to take out of their valiant effort. At Belvedere Reserve, Hastings got back on the winners board in a tight contest against Seaford. Both sides led at different points in a see-sawing contest. Up by nine at three-quarter time, Seaford looked to be in a good position to claim the win. Hastings were impressive in the final quarter and did enough to drag themselves over the line. They claimed victory 13.10 (88) to 13.16 (94). In the absence of Brendan Fevola, Luke Hewitt found the scoreboard with three goals for the victors. Red Hill hosted Devon Meadows as they looked to extend their excellent run of form. The Hillmen have been dominating teams as of late, and after holding Devon Meadows to just one goal in the first half looked as if they might continue that run. The Panthers held their own in the second half and stopped the contest from blowing out to a massive defeat. Red Hill still did more than enough to get the job done though, as the secured the four points with a 10.19 (79) to 5.4 (34) win. Aidan Marchesani was best

afield for the Hillmen. The win cemented Red Hill as the best defensive outfit in the competition. A four goal performance by Curtis Bywater has helped Chelsea secure a comfortable 60 point win over Rye at Chelsea Reserve. The Seagulls got things started on the right foot with an eight goals to one first term. From there Rye had no way back into the game. The Demons ended up defeated in a 15.16 (106) to 6.10 (46) loss. Langwarrin had a brilliant afternoon at Lloyd Park, hammering Pearcedale by over 100 points. Pearcedale could only manage one goal for the whole afternoon and couldnâ&#x20AC;&#x2122;t stop the Kangaroosâ&#x20AC;&#x2122; onslaught. Jesse Murphy and Zach Andrewartha kicked four majors apiece and their side won the match 17.20 (122) to 1.6 (12). It was also another tough afternoon for Crib Point, as they were smashed by Somerville at Somerville Recreation Reserve. Somerville put 21 goals on the board and Crib Point could do nothing to stop them. The final score read Somerville 21.16 (142) to Crib Point 5.1 (31).