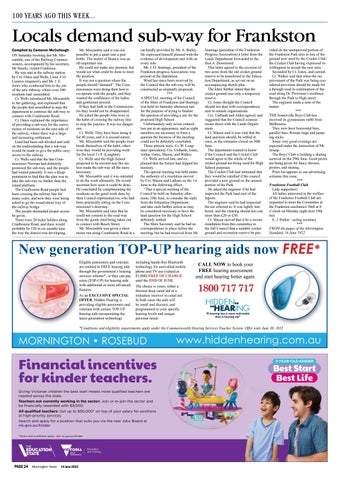 Locals demand sub-way for Frankston Compiled by Cameron McCullough ON Saturday morning last Mr. Miscamble, one of the Railway Commissioners, accompanied by his secretary, Mr Hearle, visited Frankston. He was met at the railway station by Crs. Oates and Wells, Lieut.-Col. Lazarus (engineer), and Mr. J. E. Jones who conducted him to the site of the new subway, where over 100 residents had assembled. Cr. Wells introduced Mr. Miscamble to the gathering, and explained that the people had assembled to urge the department to continue the sub-way to connect with Cranbourne Road. Cr. Oates explained the importance of providing a sub-way for the convenience of residents on the east side of the railway, where there was a large and increasing settlement. Land had been sub-divided and sold on the understanding that a sub-way would be made to give the public easy access to the railway. Cr. Wells said that the late Commissioner Norman had definitely promised the sub-way, and the people had waited patiently. It was a disappointment to find that the plan was to take the sub-way no further than the island platform. The Cranbourne Road people had been crossing the railway line for many years, and now they were being asked to go the round-about way of the railway bridge. The people demanded proper access be given. There were 20 ticket holders along Cranbourne Road, and there would probably be 120 in six months time the way the district was developing.

Mr. Miscamble said it was not possible to put a quart into a pint bottle. The matter of finance was an all-important one. He could not make any promise, but would see what could be done to meet the position. It was not a question where the people should “demand”. The Commissioners were doing their best to co-operate with the people, and they wanted the confidence of the ladies and gentlemen present. If they had faith in the Commissioners they would not be disappointed. He asked the people who were in the habit of crossing the railway line to stop the practice. It was too dangerous. Cr. Wells: They have been doing it for 40 years, and it is second nature. Mr. Miscamble said the people must break themselves of the habit, otherwise they would be providing work for the local J’s P. (Laughter). Cr. Wells said the High School proposed to be erected near the station made the sub-way all the more necessary. Mr. Miscamble said it was intended to do the work ultimately. He would ascertain how soon it could be done. He concluded by complimenting the residents on the good work done by their Council representatives, who had been practically sitting on the Commissioner’s doorstep. Mr. Miscamble said later that he could not consent to the road way from the goods shed being taken out to connect with Beach Street. Mr. Miscamble was given a short motor run along Cranbourne Road in a

car kindly provided by Mr. A. Bailey. He expressed himself pleased with the evidence of development met with on every side. Mr. J. D. Jennings, president of the Frankston progress Association, was present at the deputation. Word has since been received by the Council that the sub-way will be constructed as originally proposed. *** A SPECIAL meeting of the Council of the Shire of Frankston and Hastings was held on Saturday afternoon last for the purpose of trying to finalise the question of providing a site for the proposed High School. Unfortunately only seven councillors put in an appearance, and as eight members are necessary to form a quorum the business of the meeting could not be definitely concluded. Those present were: Cr. W. Longmuir (president); Crs. Unthank, Jones, Alden, Oates, Mason, and Walker. Cr. Wells arrived late, and explained that the fixture had slipped his memory. The special meeting was held under the authority of a resolution moved by Crs. Mason and Latham on the 1st June to the following effect: “That a special meeting of the Council be held on Saturday afternoon, 10th June, to consider the reply from the Education Department, and take such further action as may be considered necessary to have the land question for the High School definitely settled. The Shire Secretary said he had no correspondence to place before the meeting, but he had received from Mr.

Jennings (president of the Frankston Progress Association) a letter from the Lands Department forwarded to the Hon A .Downward. This letter agreed to the excision of two acres from the old cricket ground reserve to be transferred to the Education Department, as set out on an accompanying sketch plan. The letter further stated that the cricket ground was only a temporary reserve. Cr. Jones thought the Council should not deal with correspondence sent to outside organisations. Crs. Unthank and Alden agreed, and suggested that the Council communicate direct with the Lands Department. Cr. Mason said it was vital that the land question should, be settled at once, as the estimates closed on 30th June. The department wanted to know if the Council and the Cricket Club would agree to the whole of the cricket ground are being used for High School purposes. The Cricket Club had intimated that they would be satisfied if the council provided a new ground on the unused portion of the Park. He asked the engineer if he had inspected the Park land east of the lagoon. The engineer said he had inspected the are referred to. It was lightly timbered, and the clearing should not cost more than £20 or £30. Cr. Mason moved that it be a recommendation from this committee to the full Council that a suitable cricket ground and recreation reserve be pro-

vided on the unimproved portion of the Frankston Park area in lieu of the ground now used by the Cricket Club, the Cricket Club having expressed its willingness to accept the new area. Seconded by Cr. Jones, and carried. Cr. Walker said that when the improvement of the Park was being considered provision should be made for a through road in continuation of the road along Dr. Plowman’s residence through the Park to High street. The engineer made a note of the matter. *** THE Somerville Boys Club has received its gymnasium outfit from Melbourne. They now have horizontal bars, parallel bars, Roman rings and jumping sticks. Some very good evenings are expected under the instruction of Mr Jessup. The Boys’ Club is holding a skating carnival on the 29th June. Good prizes are being given for fancy dresses, posters, and skating. Prize list appears in our advertising columns this issue. *** Frankston Football Club Lady supporters! All ladies interested in the welfare of the Frankston Football Club are requested to meet the Committee at the Frankston mechanics’ Hall at 8 o’clock on Monday night next 19th inst. E. J. Parker - acting secretary *** FROM the pages of the Mornington Standard, 16 June 1922

including hands-free Bluetooth technology for unrivalled mobile phone and TV use (valued at $3,000) FREE OF CHARGE until the END OF JUNE. The choice is yours, either a discreet deep canal aid or a miniature receiver in canal aid. In both cases the aids will be small and discreet, and programmed to your specific hearing levels and unique personal needs.

Financial incentives for kinder teachers. Giving Victorian children the best start means more qualified teachers are needed across the state. Teachers not currently working in the sector: Join or re-join the sector and be financially rewarded with $9,000. All qualified teachers: Get up to $50,000* on top of your salary for positions at high-priority services. Search and apply for a position that suits you via the new Jobs Board at vic.gov.au/kinder *Terms and conditions apply, visit vic.gov.au/kinder