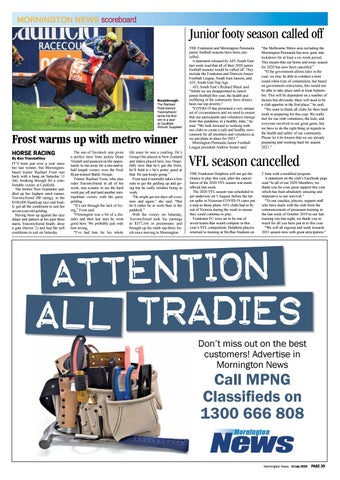 Breakthrough: The Rachael Frost-trained Travimyfriend lands his first win in a year at Caulfield. Picture: Supplied

By Ben Triandafillou IT’S been just over a year since her last winner, but Morningtonbased trainer Rachael Frost was back with a bang on Saturday 11 July breaking through for a comfortable victory at Caulfield. The former New Zealander saddled up her highest rated runner, Travimyfriend (88 rating), in the $100,000 Handicap race and finally got all the conditions to suit her seven-year-old gelding. Having been up against the race shape and pattern at his past three starts, Travimyfriend finally drew a gate (barrier 2) and had the soft conditions to suit on Saturday.

The son of Tavistock was given a perfect steer from jockey Dean Yendall and pounced on the opportunity to run away for a one-and-ahalf length victory over the Nick Ryan-trained Battle Torque. Trainer Rachael Frost, who also rides Travimyfriend in all of his work, was ecstatic to see the hard work pay off and land another metropolitan victory with the gutsy gelding. “It’s not through the lack of trying,” Frost said. “Flemington was a bit of a disaster and then last start he went good here. We probably just rode him wrong. “I’ve had him for his whole

life since he was a yearling. He’s Group One placed in New Zealand and stakes placed here, too. Hopefully now that he’s got the form, he’ll hold it – he’s pretty good at that. He just keeps going.” Frost said it normally takes a few runs to get the gelding up and going but he really relishes being in work. “He might get ten days off every now and again,” she said. “But he’d rather be in work than in the paddock.” With the victory on Saturday, Travimyfriend took his earnings to $357,164 in prizemoney and brought up his ninth top-three finish since moving to Mornington.

THE Frankston and Mornington Peninsula junior football seasons have been cancelled. A statement released by AFL South East last week read that all of their 2020 junior football seasons would be called off. They include the Frankston and Districts Junior Football League, South East Juniors, and AFL South East Top-Age. AFL South East’s Richard Black said “whilst we are disappointed to cancel junior football this year, the health and wellbeing of the community have always been our top priority.” “COVID-19 has presented a very unique set of circumstances and we need to ensure that our participants and volunteers emerge from this pandemic in a healthy state,” he said. “We look forward to working with our clubs to create a safe and healthy environment for all members and volunteers as we put plans in place for 2021.” Mornington Peninsula Junior Football League president Andrew Souter said

“the Melbourne Metro area including the Mornington Peninsula has now gone into lockdown for at least a six week period. This means that our home and away season for 2020 has now been cancelled.” “If the government allows later in the year, we may be able to conduct a mini round robin type of competition, but based on government restrictions, this would not be able to take place until at least September. This will be dependent on a number of factors but obviously there will need to be a club appetite in the first place,” he said. “We want to thank all clubs for their hard work in preparing for this year. We really feel for our club volunteers, the kids, and everyone involved in our great game, but we have to do the right thing in regards to the health and safety of our community. Please let it be known that we are already preparing and working hard for season 2021.”

VFL season cancelled THE Frankston Dolphins will not get the chance to play this year, after the cancellation of the 2020 VFL season was made official last week. The 2020 VFL season was scheduled to get underway on 1 August, before the latest spike in Victorian COVID-19 cases put a stop to those plans. AFL clubs had to fly out of Victoria during the week to ensure they could continue to play. Frankston FC were set to be one of seven teams that would compete in this year’s VFL competition. Dolphins players returned to training at SkyBus Stadium on

2 June with a modified program. A statement on the club’s Facebook page read “to all of our 2020 Members, we thank you for your great support this year which has been absolutely amazing and imperative to our survival.” “To our coaches, players, support staff who have stuck with the club from the commencement of preseason training in the last week of October 2019 to our last training run last night, we thank you so much for all you have put in to this year. “We will all regroup and work towards 2021 season now with great anticipation.”