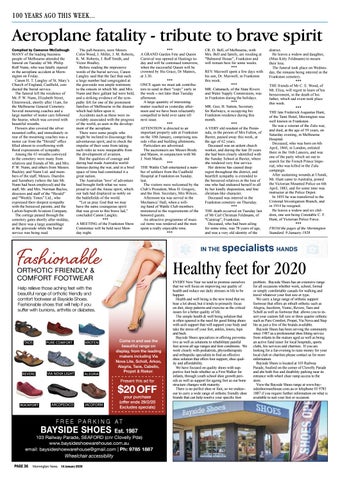 Aeroplane fatality - tribute to brave spirit Compiled by Cameron McCullough MANY of the leading business people of Melbourne attended the funeral on Tuesday of Mr. Philip Roff Nunn, who was fatally injured in the aeroplane accident at Mornington on Friday. Canon H. T. Langley of St. Mary’s Church of England, Caulfield, conducted the burial service. The funeral left the residence of Mr. P. W. Nunn, Elizabeth Street, Elsternwick, shortly after 11am, for the Melbourne General Cemetery. Several mourning coaches and a large number of motor cars followed the hearse, which was covered with beautiful wreaths. Flowers also covered the silver mounted coffin, and immediately in rear of the mourning coaches was a motor car from the “Herald” office filled almost to overflowing with floral expressions of sympathy. Among the 45 wreaths conveyed to the cemetery were many from relatives and friends of Mr. and Mrs. P. W. Nunn, and others from Messrs. Buckley and Nunn Ltd. and members of the staff; Messrs. Duerdin and Sainsbury (where the late Mr. Nunn had been employed) and the staff; Mr. and Mrs. Norman Bayles; directors and staff of the “Herald” and “Weekly Times” Ltd., who expressed their deepest sympathy with the bereaved parents; and the Larkin-Sopwith Aviation Company. The cortege passed through the cemetery gates shortly after midday, and there was a large assemblage at the graveside while the burial service was being read.

The pall-bearers, were Messrs. Colin Wood, J. Miller, J. M. Roberts, K. M. Roberts, J. Roff Smith, and Victor Bindley. Before reading the impressive words of the burial service, Canon Langley said that the fact that such a large number had congregated at the graveside was ample testimony to the esteem in which Mr. and Mrs. Nunn and their gallant lad were held, and a striking evidence of the sympathy felt for one of the prominent families of Melbourne in the disaster which had fallen upon it. Accidents such as these were inevitably associated with the progress of the world, as seen in the development of the aeroplane. There were some people who might be inclined to discourage this adventurous spirit, and to check the impulse of their sons from taking such risks as were inseparable from the development of aviation. But the qualities of courage and daring had made Australia worldfamous during the war, and in a brief space of time had constituted it a great nation. The Australian ‘love’ of adventure had brought forth what we were proud to call the Anzac spirit, which our lads had displayed so nobly on the battlefields of the world. “Let us pray God that we may have the same courageous spirit that was given to this brave lad,” concluded Canon Langley. *** A MEETING of the Frankston Show Committee will be held next Monday night.

*** A GRAND Garden Fete and Queen Carnival was opened at Hastings today and will be continued tomorrow, when the successful Queen will be crowned by His Grace, Dr Mannix, at 3.30. *** ONCE again we must ask contributors to send in their “copy” early in the week – not later than Tuesday afternoon. A large quantity of interesting matter reached us yesterday afternoon and we have been reluctantly compelled to hold over same till next issue. *** ATTENTION is directed to an important property sale at Frankston on the 10th January, comprising seaside villas and building allotments. Particulars are advertised. The auctioneers are Messrs Brody and Mason, in conjunction with Mr J. Nott Marsh. *** THE Wattle Club entertained a number of soldiers from the Caulfield Hospital at Frankston on Sunday. last. The visitors were welcomed by the Club’s President, Miss D. Gregory, and the Hon. Secretary, Mrs Wilcox. Afternoon tea was served in the Mechanics’ Hall, when a willing band of Wattle Club members ministered to the requirements of the honored guests. An attractive programme of musical items was rendered and the men spent a really enjoyable time. ***

Help relieve those aching feet with the beautiful range of orthotic friendly and comfort footwear at Bayside Shoes. Fashionable shoes that will help if you suffer with bunions, arthritis or diabetes.

Come in and see the beautiful range on display, from the leading makers including Via Nova Lite, Scholl, Arkoo, Alegria, Taos, Cabello, Propet & Rieker.

Present this ad for

district. He leaves a widow and daughter, (Miss Kitty Feldmann) to mourn their loss. The funeral took place on Wednesday, the remains being interred in the Frankston cemetery. *** THE friends of Mr C. E. Wood, of Mt. Eliza, will regret to learn of his bereavement, in the death of his father, which sad event took place this week. *** THE late Frederick Augustus Hunt, of the Tanti Hotel, Mornington was well known in Frankston. He was a veteran of the Zulu war, and died, at the age of 59 years, on Saturday evening, in Melbourne Hospital. Deceased, who was born on 6th April, 1860, in London, enlisted there in the 16th Lancers, and was one of the party which set out to search for the French Prince Imperial, who was killed in the Zulu campaign. After sustaining wounds.at Ulundi, Mr. Hunt came to Australia, joined the Victorian Mounted Police on 6th April, 1883, and for some time was instructor at the Police Depot. In 1893 he was transferred to the Criminal Investigation Branch, and in 1914 he resigned. He leaves a widow and six children, one son being Constable C. F. Hunt, of Victorian Police Force. *** FROM the pages of the Mornington Standard, 9 January 1920

CR. D. Bell, of Melbourne, with Mrs. Bell and family, are residing at “Balmoral House”, Frankston and will remain here for some weeks. *** REV. Maxwell spent a few days with his son, Dr. Maxwell, in Frankston this week. *** MR. Cattanach, of the State Rivers and Water Supply Commission, was in Frankston during the holidays. *** MR. Geo; H. Sutton, Secretary for Railways; is occupying his Frankston residence during this month. *** A VERY old resident of the Peninsula, in the person of Mrs Fulton, of Baxter, passed away this week, at the age of 62 years. Deceased was an ardent church worker, and during the last 20 years she had been closely identified with the Sunday School at Baxter, where she rendered very fine service. Her demise has caused deep regret throughout the district, and heartfelt sympathy is extended to the bereaved relatives in the loss of one who had endeared herself to all by her kindly disposition, and fine christian-like character. Deceased was interred in the Frankston cemetery on Thursday. *** THE death occurred on Tuesday last of Mr Carl Christian Feldmann, of “Catstrup”, Frankston. Deceased, who bad been ailing for some time, was 78 years of age, and was a very old identity of the

EVERY New Year we tend to promise ourselves that we will focus on improving our quality of health and reduce our daily stresses in life to be happier. Health and well being is the new trend that we hear a lot about, but it tends to primarily focus on diet, sleep patterns and exercise as the critical issues for a better quality of life. The simple health & well being solution that is often ignored is the need for good fitting shoes with arch support that will support your body and take the stress off your feet, ankles, knees, hips and back. Bayside Shoes specializes in offering preventative as well as solutions to rehabilitate painful feet across all age ranges and foot conditions. We work closely with podiatrists, physiotherapists and orthopedic specialists to find an effective shoe solution that offers foot support, shoe quality and affordability. We have focused on quality shoes with supportive foot beds whether as a First Walker for infants, through youth school shoe growth periods as well as support for ageing feet as our bone structure changes with maturity. There is no perfect shoe or foot, so we endeavour to carry a wide range of orthotic friendly shoe brands that can help resolve your specific foot

problem. Bayside Shoes has an extensive range for all occasions whether work, school, formal or simply comfortable casuals for walking and travel whatever your foot size or type. We carry a large range of orthotic support footwear that offers an inbuilt orthotic such as Alegria, Jacoform, Vionic, Revere, Taos and Scholl as well as footwear that allows you to insert your custom full size or three quarter orthotic such as Pure Comfort, Propet, Via Nova and Step lite as just a few of the brands available. Bayside Shoes has been serving the community since 1987 as a professional shoe fitting service from infants to the mature aged as well as being an active fund raiser for local hospitals, sports clubs, fire services and charities. If you are looking for a fun evening to raise money for your local club or charities please contact us for more information. Bayside Shoes is located at 103 Railway Parade, Seaford on the corner of Clovelly Parade and ahs both free and disability parking near its entrance with wheel chair ramp access to the store. View the Bayside Shoes range at www.baysideshoewarehouse.com.au or telephone 03 9785 1887 if you require further information on what is available to suit your feet or occasion.