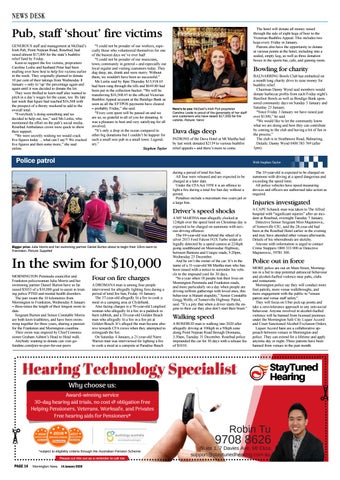 Pub, staff ‘shout’ fire victims GENEROUS staff and management at McDaid’s Irish Pub, Point Nepean Road, Rosebud, had raised almost $17,000 for the state’s bushfire relief fund by Friday. Keen to support the fire victims, proprietors Caroline Leslie and husband Peter had been mulling over how best to help fire victims earlier in the week. They originally planned to donate 10 per cent of their takings from Wednesday 8 January – only to ‘up’ the percentage again and again until it was decided to donate the lot. They were thrilled to learn staff also wanted to pitch in a day’s wages for the cause, too. By late last week that figure had reached $16,568 with the prospect of a thirsty weekend to add to the overall total. “Everybody’s doing something and we decided to help out, too,” said Ms Leslie, who mentioned the effort on the pub’s social media. Rosebud Ambulance crews were quick to show their support. “We were secretly wishing we would crack five figures today ... what can I say?! We cracked five figures and then some more,” she said online.

“I could not be prouder of our workers, especially those who volunteered themselves for one of the busiest days we’ve ever had! “I could not be prouder of our musicians, town, community in general – and especially our loyal regular and visiting customers today. They dug deep, ate, drank and were merry. Without them, we wouldn&#39;t have been so successful.” Ms Leslie said by 8pm Thursday $15,918.65 had been rung through the tills and $649.80 had been put in the collection bucket. “We will be transferring $16,568.45 to the official Victorian Bushfire Appeal account at the Bendigo Bank as soon as all the EFTPOS payments have cleared – probably Friday,” she said. “Every cent spent will be passed on and we are so, so grateful to all of you for donating. It was a pleasure to host and very satisfying for all involved. “It’s only a drop in the ocean compared to other big donations but I couldn’t be happier for such a small wee pub in a small town. Legendary.” Stephen Taylor

The hotel will donate all money raised through the sale of eight kegs of beer to the Victorian Bushfire Appeal. This includes two kegs every Friday in January. Patrons also have the opportunity to donate at various points at the hotel, including into a sealed, empty keg, as well as three donation boxes in the sports bar, cafe, and gaming room.

Here’s to you: McDaid’s Irish Pub proprietor Caroline Leslie is proud of the generosity of her staff and customers who have raised $17,000 for fire victims. Picture: Yanni

Dava digs deep PATRONS of the Dava Hotel at Mt Martha had by last week donated $2139 to various bushfire relief appeals – and there’s more to come.

BALNARRING Bowls Club has embarked on a month long charity drive to raise money for bushfire relief. Chairman Danny Wynd said members would donate barbecue profits from each Friday night’s Barefoot Bowls as well as Bendigo Bank sponsored community days on Sunday 5 January and Saturday 25 January. “Since Friday 3 January we have raised just over $1300,” he said. “We would like to let the community know what we are doing and how they can contribute by coming to the club and having a bit of fun in the process.” The club is in Strathmore Road, Balnarring. Details: Danny Wynd 0400 583 769 (after 1pm).

during a period of total fire ban. All four were released and are expected to be charged at a later date. Under the CFA Act 1958 it is an offence to light a fire during a total fire ban day without a permit. Penalties include a maximum two years jail or a large fine.

Bigger prize: Julia Morris and her swimming partner Daniel Burton about to begin their 10km swim to Frankston. Picture: Supplied

In the swim for $10,000 MORNINGTON Peninsula councillor and Frankston policewoman Julia Morris and her swimming partner Daniel Burton have so far raised $5055 of a $10,000 goal to assist in treating police PTSD and mental health disorders. The pair swam the 10 kilometres from Mornington to Frankston, Wednesday 8 January – three-times the length of their longest swim to date. Sergeant Burton and Senior Constable Morris are both keen triathletes, and have been swimming together for three years, sharing a passion for the Frankston and Mornington coastline. Their swim was inspired by Chief Commissioner Graham Ashton’s Head to Head walk. Anybody wanting to donate can visit gofundme.com/pier-to-pier-for-our-peers

A MT MARTHA man allegedly clocked at 124kph over the speed limit on Christmas day is expected to be charged on summons with serious driving offences. The 69-year-old was behind the wheel of a silver 2015 Ford Falcon FGX Turbo sedan allegedly detected by a speed camera at 224kph going southbound on Moorooduc Highway, between Bentons and Craigie roads, 9.20pm, Wednesday 25 December. And he isn’t the owner of the car: It’s in the name of a 31-year-old Mt Martha man who has been issued with a notice to surrender his vehicle to the impound yard for 30 days. “In a year when 18 people lost their lives on Mornington Peninsula and Frankston roads, and more particularly on a day when people are driving to/from gatherings with loved ones, this behaviour is blatant stupidity,” Senior Constable Gregg Wolfe, of Somerville Highway Patrol, said. “It’s a pity that when a driver starts the engine to their car they also don’t start their brain.”

Walking speed A ROSEBUD man is walking into 2020 after allegedly driving at 106kph in a 50kph zone along Point Nepean Road through Dromana, 3.30am, Tuesday 31 December. Rosebud police impounded the car for 30 days with a release fee of $1010.

The 35-year-old is expected to be charged on summons with driving at a speed dangerous and exceeding the speed limit. All police vehicles have speed measuring devices and officers are authorised take action as required.

Injuries investigated A CAPE Schanck man was taken to The Alfred hospital with “significant injuries” after an incident at Rosebud, overnight Tuesday 7 January. Detective Senior Sergeant Miro Majstorovic, of Somerville CIU, said the 28-year-old had been at the Rosebud Hotel earlier in the evening and may have attended other venues afterwards. Details of his whereabouts are sketchy. Anyone with information is urged to contact Crime Stoppers 1800 333 000 or Detective Majstorovic, 59781 300.

Police out in force MORE police are out on Main Street, Mornington in a bid to stop potential antisocial behaviour and alcohol-fuelled violence near pubs, clubs and restaurants. Mornington police say they will conduct more foot patrols, more venue walkthroughs, and more engagement with the public to “ensure patron and venue staff safety”. They will focus on Uber pick-up points and take a zero-tolerance approach to any anti-social behaviour. Anyone involved in alcohol-fuelled violence will be banned from licensed premises under the Mornington Safe City Liquor Accord and Court Sanctioned Alcohol Exclusion Orders. Liquor Accord bans are a collaborative approach between venues in Mornington and police. They can extend for a lifetime and apply anytime day or night. Three patrons have been banned from venues in the past month.