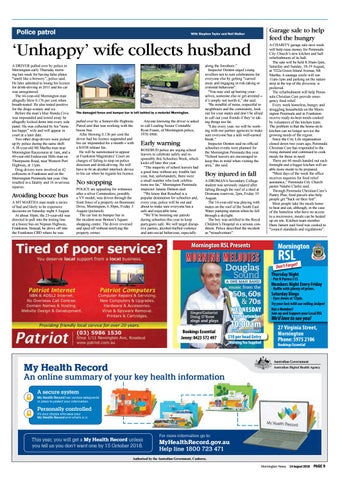 With Stephen Taylor and Neil Walker

‘Unhappy’ wife collects husband A DRIVER pulled over by police in Mornington early Thursday morning last week for having false plates “smelt like a brewery”, police said. He later admitted to losing his licence for drink-driving in 2011 and his car was unregistered. The 44-year-old Mornington man allegedly blew 0.176 per cent when breath-tested. He also tested positive for the drugs ecstasy and ice. Before the man’s blue Honda Civic was impounded and towed away he allegedly kicked dents into every side panel. He was collected by his “none too happy” wife and will appear in court at a later date. Two other drug-drivers were picked up by police during the same shift: A 38-year-old Mt Martha man near Mornington Racecourse at 1am, and a 40-year-old Endeavour Hills man on Thompsons Road, near Western Port Highway, at 11pm. Drug drivers were involved in 42 collisions in Frankston and on the Mornington Peninsula last year. One resulted in a fatality and 16 in serious injuries.

Avoiding booze bus A MT MARTHA man made a series of bad and likely to be expensive decisions on Saturday night 4 August. At about 10pm, the 23-year-old was directed to pull into the testing line at a booze bus on Nepean Highway, Frankston. Instead, he drove off into the Frankston CBD where he was

The damaged fence and bumper bar in left behind by a motorist Mornington.

pulled over by a Somerville Highway Patrol unit that was working with the booze bus. After blowing 0.136 per cent the driver had his licence suspended and his car impounded for a month – with a $1038 release fee. He will be summonsed to appear at Frankston Magistrates’ Court on charges of failing to stop on police direction and drink-driving. He will have to fit an alcohol interlock device to his car when he regains his licence.

No stopping POLICE are appealing for witnesses after a silver Commodore, possibly a VY model, was driven through the front fence of a property on Boormani Drive, Mornington, 6.30pm, Friday 3 August (pictured). The car lost its bumper bar in the incident near Benton’s Square shopping centre. The driver reversed and sped off without notifying the property owner.

Anyone knowing the driver is asked to call Leading Senior Constable Ryan Fraser, of Mornington police, 5970 4900.

Early warning ROSEBUD police are urging school leavers to celebrate safely and responsibly this Schoolies Week, which kicks off later this year. “The majority of school leavers had a good time without any trouble last year, but, unfortunately, there were a small number who took celebrations too far,” Mornington Peninsula inspector Janene Denton said. “We know that Rosebud is a popular destination for schoolies and, every year, police will be out and about to make sure everyone has a safe and enjoyable time. “We’ll be boosting our patrols during schoolies this year to keep partygoers safe. We will target disruptive parties, alcohol-fuelled violence and anti-social behaviour, especially

along the foreshore.” Inspector Denton urged young revellers not to ruin celebrations for everyone else by getting “carried away and engaging in risk-taking or criminal behaviour”. “You may end up hurting yourselves, someone else or get arrested – it’s simply not worth it,” she said. “Be mindful of noise, respectful to neighbours and the community, look out for your mates and don’t be afraid to call out your friends if they’re taking things too far. “Like every year, we will be working with our partner agencies to make sure everyone has a safe well-earned break.” Inspector Denton said no official schoolies events were planned for the Mornington Peninsula this year. “School leavers are encouraged to keep this in mind when visiting the area,” she said.

Boy injured in fall A DROMANA Secondary College student was seriously injured after falling through the roof of a shed at Dromana reservoir, 2pm, Friday 10 August. The 14-year-old was playing with mates on the roof of the South East Water pumping station when he fell through a skylight. The boy was airlifted to the Royal Children’s Hospital in a serious condition. Police described the incident as “misadventure”.

A CHARITY garage sale next week will help raise money for Peninsula City Church’s new kitchen and hall refurbishment of its hall. The sale will be held 8.30am-2pm, Saturday and Sunday, 18-19 August, at 7/22a Green Island Avenue, Mt Martha. A sausage sizzle will run 11am-1pm and parking on the nature strip at the top of the driveway is preferred. The refurbishment will help Peninsula Christian Care provide emergency food relief. Every week homeless, hungry and struggling households on the Mornington Peninsula and in Frankston receive ready-to-heat meals cooked by volunteers of the kitchen team. The problem is that the home-style kitchen can no longer service the growing needs of the region. Since the City Life organisation closed down two years ago, Peninsula Christian Care has responded to the rising demand and continued to cook meals for those in need. There are 60 meals handed out each fortnight and a bigger kitchen will enable more meals to be prepared. “Most days of the week the office receives inquiries for food relief assistance,” Peninsula City Church pastor Natalie Clarke said. Through Peninsula Christian Care’s Pantry Plus, food parcels also help people get “back on their feet”. Most people take the meals home to heat and eat, although, in the case of the homeless who have no access to a microwave, meals can be heated up on site. Kitchen team member Hans Jansen said food was cooked to “council standards and regulations”.

- Raffle with plenty of prizes.

- Eyes down at 12pm. Try your luck with our rolling Jackpot Not a Member? Join up and Support your Local RSL