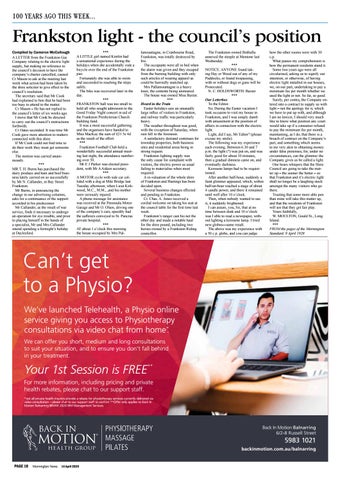 Frankston light - the council’s position Compiled by Cameron McCullough A LETTER from the Frankston Gas Company relating to the electric light supply, but making no reference to the council’s decision to have the company’s charter cancelled, caused Cr Mason to ask at the meeting last week what action had been taken by the shire solicitor to give effect to the council’s resolution. The secretary said that Mr Cook had explained to him that he had been too busy to attend to the matter. Cr Mason – He has not replied to the council’s letter of six weeks ago. I move that Mr Cook be directed to carry out the council’s instructions forthwith. Cr Oates seconded. It was time Mr Cook gave more attention to matters connected with this shire. If Mr Cook could not find time to do their work they must get someone else. The motion was carried unanimously. *** MR T. H. Burns has purchased the dairy produce and ham and beef business lately carried on so successfully by Mr N. Callander, in Bay Street Frankston. Mr Burns, in announcing the change in our advertising columns, asks for a continuance of the support accorded to his predecessor. Mr Callander, as the result of war service, finds it necessary to undergo an operation for eye trouble, and prior to placing himself in the hands of a specialist, Mr and Mrs Callander intend spending a fortnight’s holiday at Daylesford.

*** A LITTLE girl named Kimlin had a sensational experience during the holidays when she accidentally rode a bicycle over the end of the Frankston pier. Fortunately she was able to swim and succeeded to reaching the steps safely. The bike was recovered later in the day. *** FRANKSTON hall was too small to hold all who sought admission to the Good Friday Night concert in aid of the Frankston Presbyterian Church building fund. It was a most successful gathering and the organisers have handed to Miss MacKay the sum of £21 5s 4d as the result of the effort. *** Frankston Football Club held a wonderfully successful annual meeting last night, the attendance numbering over 50. Mr E J Parker was elected president, with Mr A Aitken secretary. *** A MOTOR cycle with side car collided with a dog at Mile Bridge last Tuesday afternoon, when Lieut Kirkwood, M.C., M.M., ,and his mother were seriously injured. A phone message for assistance was received at the Peninsula Motor Garage and Mr O. Olsen, driving one of the company’s cars, speedily had the sufferers conveyed to St. Pancras private hospital. *** AT about 1 o’clock this morning the house occupied by Mrs Pal-

lamountagne, in Cranbourne Road, Frankston, was totally destroyed by fire. The occupants were all in bed when the alarm was given and they escaped from the burning building with only such articles of wearing apparel as could be hurriedly snatched up. Mrs Pallamountagne is a heavy loser, the contents being uninsured. The house was owned Miss Baxter. *** Heard in the Train Easter holidays saw an unusually large influx of visitors to Frankston, and railway traffic was particularly heavy. The weather throughout was good, with the exception of Saturday, when rain fell in the forenoon. A satisfactory demand continues for township properties, both business sites and residential areas being in strong request. Frankston lighting supply was the only cause for complaint with visitors, the electric power as usual failing to materialise when most required. A re-valuation of the whole shire of Frankston and Hastings has been decided upon. Several business changes effected and pending in Frankston. Cr. Chas. A. Jones received a cordial welcome on taking his seat at the council table for the first time last week. Frankston’s ranger cast his net the other day and made a notable haul for the shire pound, including two horses owned by a Frankston Riding councillor.

The Frankston owned Bothulla annexed the steeple at Mentone last Wednesday. *** NOTICE. ANYONE found taking Hay or Wood out of any of my Paddocks, or found trespassing, with or without dogs or guns will be Prosecuted. N. C. HOLDSWORTH. Baxter *** Our Letterbox To the Editor. Sir, During the Easter vacation I took occasion to visit my house in Frankston, and I was simply dumb with amazement at the position of affairs in connection with the electric light. Light, did I say, Mr Editor? (please excuse my smile). The following was my experience each evening. Between 6.30 and 7 p.m. the light (?) was put on, and was fairly good for about 10 minutes, then a gradual dimness came on, and eventually darkness. Kerosene lamps had to be requisitioned. After another half-hour, suddenly a faint glimmer appeared, which, within half-an-hour reached a stage of about 4 candle power, and there it remained until well after 10 o’clock. Then, when nobody wanted to use it, it suddenly brightened. I can assure, you, Sir, that at no time between dusk and 10 o’clock was I able to read a newspaper, without lighting a kerosene lamp. I tried new globes—same result. The above was my experience with a 50 c.p. globe, and you can judge

how the other rooms were with 30 c.p. What passes my comprehension is how the permanent residents stand it. Some two years ago were all circularised, asking us to signify our intention, or otherwise, of having electric light installed in our houses, we, on our part, undertaking to pay a minimum fee per month whether we used the light or not. So far, so good. Surely, per contra, the Company entered into a contract to supply us with light – not the apology for it, which we have to put up with, and although I am no lawyer, I should very much like to know what position any court would take up if a consumer refused to pay the minimum fee per month, maintaining, as I do, that there is a breach of contract on the Company’s part, and something which seems to me very akin to obtaining money under false pretenses, for, under no circumstances, can the glimmer the Company gives us be called a light. One hears whispers that the Shire Council are going to take the matter up – the sooner the better – so that Frankston and it’s electric light shall no longer be a laughing stock amongst the many visitors who go there. Trusting that some more able pen than mine will take this matter up, and that the residents of Frankston will see that they get fair play. Yours faithfully, W. MOULTON, Gould St., Long Island. *** FROM the pages of the Mornington Standard, 9 April 1920

Can’t get to a Physio? We’ve launched Telehealth, a Physio online service giving you access to Physiotherapy consultations via video chat from home*. We can offer you short, medium and long consultations to suit your situation, and to ensure you don’t fall behind in your treatment.

Your 1st Session is FREE** For more information, including pricing and private health rebates, please chat to our support staff. *not all private health insurers provide a rebate for physiotherapy services currently delivered via video consultation – please chat to our support staff to confirm **Offer only applies to Back In Motion Balnarring ©MAR 2020 BIM Management Services.

Back In Motion Balnarring 6/2-8 Russell Street