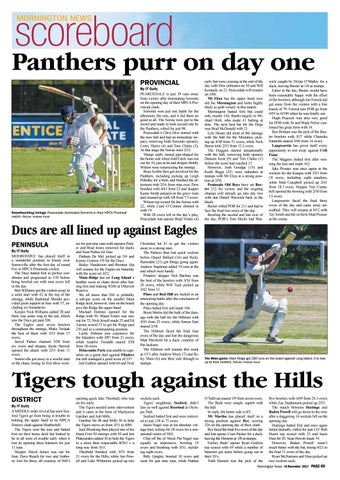 Panthers purr on day one PROVINCIAL

By IT Gully PEARCEDALE is just 39 runs away from victory after dominating Sorrento on the opening day of their MPCA Provincial clash. Sorrento won just one battle for the afternoon, the toss, and it did them no good at all. The Sorras were put to the sword and made to look second rate by the Panthers, rolled for just 98. Pearcedale’s Chris Dew started with the new ball and had an immediate impact, removing both Sorrento openers, Corey Harris (4) and Tom Clarke (5). At that stage the Sorras were 2/12. Things really turned pair-shaped for the home side when Jedd Falck was run out for 10, just as he and skipper Bobby Wilson were resurrecting the innings. Beau Scoble then got involved for the Panthers, including picking up Leigh Poholke for a blob, and finished the afternoon with 2/16 from nine over, Dew finished with 4/43 from 23 and skipper Kaine Smith jumped on the gravy train and cleaned up with 3/8 from 7.5 overs. Wilson top scored for the Sorras with 22, while Liam O’Connor chimed in with 19. With 28 overs left in the day’s play, Pearcedale lost opener Brad Trotter (4)

early but were cruising at the end of the day with Dew unbeaten on 30 and Will Kennedy on 21. Pearcedale will resume on 1/60. Mt Eliza has the upper hand over old foe Mornington and looks highly likely to grab victory in this match. Mornington batted first but could only muster 144, thanks largely to Michael Heib, who made 41 batting at nine. The next best bat for the Dogs was Brad McDonald with 21. Lyle House did most of the damage with the ball for the Mounties, picking up 4/38 from 21 overs, while Nick Baron took 2/33 from 15.2 overs. The Doggies started sensationally with the ball, removing both openers Damien Kent (9) and Tim Clarke (1) before the score had reached 15. However, Josh Goudge (15) and Keith Biggs (25) were unbeaten at stumps with Mt Eliza in a strong position at 2/50. Peninsula Old Boys have set Baxter 212 for victory and the reigning champs will already go into day two with star Daniel Warwick back in the sheds. Baxter rolled POB for 211 and had to face the final two overs of the day. Bowling the second and last over of the day, POB’s Tom Shyler had War-

Christides hit 41 to get the visitors away to a strong start. The Parkers then lost quick wickets before Daniel Ballard (34) and Ricky Ramsdale (21) got things going again. Andrew Stapleton added 19 runs at the end which were handy. Flinders’ skipper Neil Barfuss was the best of the bowlers with 3/34 from 20 overs, while Will Tuck picked up 3/42 from 15. Pines and Red Hill are locked in an interesting battle after the conclusion of the opening day. Pines batted first and made 166. Brent Martin did the bulk of the damage with the ball for the Hillmen with 3/45 from 23 overs, while Simon Dart snared 2/18. The Hillmen faced the final four overs of the day and lost the dangerous Matt Merifield for a duck, courtesy of Pat Jackson. The Hillmen will resume this week at 1/13 after Andrew Mock (7) and Riley Shaw (6) saw their side through to stumps.

The Main game: Main Ridge got 260 runs on the board against Long Island. It is now up to their bowlers. Picture: Andrew Hurst

Ducs are all lined up against Eagles PENINSULA

By IT Gully MOOROODUC has placed itself in a wonderful position to knock over Somerville after the first day of round five in MPCA Peninsula cricket. The Ducs batted first in perfect conditions and progressed to 210 before being bowled out with nine overs left in the day. Ben Williams got the visitors away to a solid start with 42 at the top of the innings, while Rashimal Mendis provided great support at four with 57, including six boundaries. Keeper Nick Williams added 28 and there was some wag in the tail, which saw the Ducs get past 200. The Eagles used seven bowlers throughout the innings, Blake Terlaak the best of them with 3/33 from 17 overs. Jarryd Parker claimed 2/28 from six overs and skipper Jayde Herrick opened the attack with 2/31 from 11 overs. Somerville got away to a woeful start in the chase, losing its first three wick-

ets for just nine runs with openers Parker and Brad Jones removed for ducks and Sean Parker for four. Pathum De Mel picked up 2/4 and Kenny Cremen 1/9 for the Ducs. Bailey Henderson and Brenton Alp will resume for the Eagles on Saturday with the score on 3/22. Main Ridge has set Long Island a healthy score to chase down after batting first and making 9/260 at Ditterich Reserve. We all know that 260 is probably a sub-par score on the smaller Main Ridge deck, however, runs on the board give the Ridge the upper hand. Michael Holmes opened for the Ridge with 50, Shaun Foster was runout for 72, Nick Jewell made 25 and Ed Aarons scored 55 to get the Ridge past 250 and in a commanding position. Lachy Dobson was expensive for the Islanders with 3/87 from 21 overs, while Andrew Tweddle snared 3/58 from 18 overs. Delacombe Park was unable to capitalise on a great start against Flinders but still managed a good score of 237. Jon Guthrie opened with 64 and Nick

wick caught by Dylan O’Malley for a duck, leaving Baxter at 1/4 at stumps. Ealier in the day, Baxter would have been reasonably happy with the effort of the bowlers, although Jon Forrest did get away from the visitors with a fine knock of 79. Forrest saw POB go from 4/55 to 6/190 when he was finally out. Hugh Peacock was also very good for POB with 36 and Wade Pelzer continued his great form with 34. Ben Brittain was the pick of the Baxter bowlers with 3/17 while Chamika Sattambi snared 3/40 from 16 overs. Langwarrin has given itself every opportunity to win away against Crib Point. The Magpies batted first after winning the toss and made 162. Jake Prosser was once again in the wickets for the Kangas with 3/23 from 18 overs, including eight maidens, while Matt Campbell picked up 2/41 from 18.1 overs. Skipper Trav Campbell opened the bowling with 2/30 from 13 overs. Langwarrin faced the final three overs of the day and came away unscathed. They will resume at 0/12 with Tay Smith and the in-form Matt Prosser at the crease.

Tigers tough against the Hills DISTRICT

By IT Gully A MIDDLE order revival has seen Seaford Tigers go from being in trouble to holding the upper hand in its MPCA District clash against Heatherhill. The Tigers won the toss and batted first on their home deck but looked to be in all sorts of trouble early when it lost its opening three batsmen for just 11 runs. Skipper David James was out for four, Dave Roach for two and Anthony Joel for three, all courtesy of Hill’s

opening quick Jake Theobald, who was on fire early. The Tigers needed some intervention and it came in the form of Mackenzie Gardner and Ash Mills. Gardner hit 48 and Mills 56 to help the Tigers move on from 3/11 to 4/89. Jack Brooking then played one of his finest First XI innings with 50 and Jon Plakourakis added 36 to help the Tigers to a more than respectable 8/262 – a long way from 3/11. Theobald finished with 3/53 from 21 overs for the Hills, while Jon Powell and Luke Whitmore picked up two

wickets each. Tigers’ neighbour, Seaford, didn’t fare as well against Rosebud at Olympic Park. Seaford batted first and were restricted to just 138 in 75 overs. Jason Nagel was at his absolute vintage best, toiling for 28 overs for a sensational return of 5/62. Chip off the ol’ block Pat Nagel was equally as impressive, bowling 19 overs and finishing with 3/31, including eight overs. Billy Quigley bowled 10 overs and went for just nine runs, while Nathan

O’Sullivan snared 1/9 from seven overs. The Buds were simply superb with the ball. In reply, the home side is 0/3. Mt Martha has placed itself in a strong position against Rye, scoring 226 on the opening day of their clash. Rye faced the final five overs of the day and lost opener Coen Packer for a duck, leaving the Demons at 1/8 at stumps. Earlier, Reds’ opener Ryan Godwin top scored with 69 while a number of batsmen got starts before going out in their 20’s. Todd Harnett was the pick of the

Rye bowlers with 4/49 from 20.3 overs while Zac Stephenson picked up 2/55. The match between Hastings and Baden Powell will go down to the wire after a staggering 14 wickets fell on the opening day. Hastings batted first and once again failed dismally, rolled for just 119. Rob Hearn top scored with 23 and Isuru Dias hit 20. Sean Hewitt made 19. However, Baden Powell wasn’t much better with the bat, losing 4/23 in the final 11 overs of the day. Ryan McNamara and Dias picked up two wickets each.