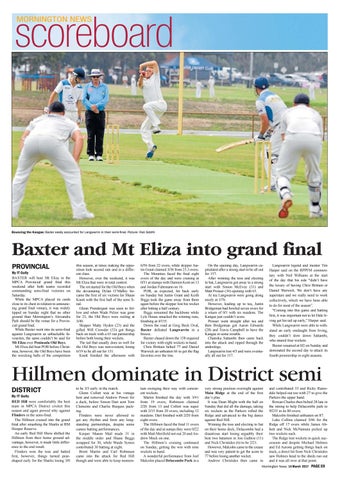 Baxter and Mt Eliza into grand final PROVINCIAL By IT Gully BAXTER will host Mt Eliza in the MPCA Provincial grand final this weekend after both teams recorded commanding semi-final victories on Saturday. While the MPCA played its cards close to its chest in relation to announcing grand final venues, it was widely tipped on Sunday night that no other ground than Mornington’s Alexandra Park should be the venue for a Provincial grand final. While Baxter went into its semi-final against Langwarrin as unbackable favourites, the same couldn’t be said for Mt Eliza over Peninsula Old Boys. Mt Eliza did beat POB before Christmas, however, the Old Boys have been the wrecking balls of the competition

this season, at times making the opposition look second rate and in a different class. However, over the weekend, it was Mt Eliza that were in total control. The rot started for the Old Boys when the devastating Dylan O’Malley became the first of six victims for Shaun Knott with the first ball of the semi final. Glenn Prendergast was soon to follow and when Wade Pelzer was gone for 23, the Old Boys were reeling at 3/40. Skipper Matty Hyden (23) and the gifted Will Crowder (53) got things back on track with a 65 run partnership before both losing their wickets. The tail that usually does so well for the Old Boys was non-existent, losing 6/19 to be all out for 151. Knott finished the afternoon with

6/56 from 22 overs, while skipper Justin Grant claimed 3/36 from 25.3 overs. The Mounties faced the final eight overs of the day and were cruising at 0/31 at stumps with Damien Kent on 13 and Jordan Fuhrmann on 16. POB, as expected, hit back early on Sunday but Justin Grant and Keith Biggs took the game away from them again before the skipper lost his wicket after hitting a half century. Biggs remained the backbone while Lyle House smacked the winning runs, finishing at 4/155. Down the road at Greg Beck Oval, Baxter defeated Langwarrin in a breeze. Baxter chased down the 158 required for victory with eight wickets in hand. Chris Brittain belted 77 and Daniel Warwick an unbeaten 66 to get the flag favorites over the line.

On the opening day, Langwarrin capitulated after a strong start to be all out for 157. After winning the toss and electing to bat, Langwarrin got away to a strong start with Simon McEvoy (31) and Matt Prosser (34) opening with 65. At tea Langwarrin were going along nicely at 1/76. However, leading up to tea, Justin Bridgeman had bowled seven overs for a return of 0/1 with six maidens. The Kangas just couldn’t score. Prosser went straight after tea and then Bridgeman got Aaron Edwards (28) and Travis Campbell to have the Kangas in some trouble. Chamika Sattambi then came back into the attack and ripped through the underdogs. Langwarrin lost 4/3 and were eventually all out for 157.

Langwarrin legend and mentor Tim Harper said on the RPPFM commentary with Neil Williams at the start of the day that his side “didn’t have the luxury of having Chris Brittain or Daniel Warwick. We don’t have any superstars and we really need to work collectively, which we have been able to do for most of the season”. “Coming into this game and batting first, it was important not to let Dale Irving get his tail up early,” Harper said. While Langwarrin were able to withstand an early onslaught from Irving, they couldn’t slow down Sattambi, who snared four wickets. Baxter resumed at 0/2 on Sunday and dominated the second day to attack its fourth premiership in eight seasons.

By IT Gully RED Hill were comfortably the best team in MPCA District cricket this season and again proved why against Flinders in the semi-final. The Hillmen cruised into the grand final after smashing the Sharks at RM Hooper Reserve. An early Red Hill Show shifted the Hillmen from their home ground advantage, however, it made little difference to the end result. Flinders won the toss and batted first, however, things turned pearshaped early for the Sharks losing 3/0

to be 3/3 early in the match. Glenn Collett was at his vintage best and removed Andrew Power for a duck, before Simon Dart sent Tom Clements and Charlie Burgess packing. Flinders were never allowed to get any rhythm and form any longstanding partnerships, despite some cameo batting performances. Keeper Mason Mail made 31 in the middle order and Shane Beggs scrapped for 30, while Waide Symes contributed 30 batting at eight. Brent Martin and Carl Robinson came into the attack for Red Hill though and were able to keep momen-

tum swinging their way with consistent wickets. Martin finished the day with 3/41 from 19 overs, Robinson claimed 2/26 from 13 and Collett was super with 2/15 from 20 overs, including 12 maidens. Dart finished with 2/20 from eight overs. The Hillmen faced the final 11 overs of the day and at sumps they were 0/22 with Matt Merifield not out 20 and Andrew Mock on one. The Hillmen’s cruising continued on Sunday, getting the win with nine wickets in hand. A wonderful performance from Joel Malcolm placed Delacombe Park in a

very strong position overnight against Main Ridge at the end of the first day’s play. It was Dean Blight with the ball on Sunday that did all the damage, taking six wickets as the Parkers rolled the Ridge and advanced to the big dance against Red Hill. Winning the toss and electing to bat on their home deck, Delacombe had a disastrous start losing arguably their best two batsmen in Jon Guthrie (11) and Nick Christides (6) to be 2/21. However, Malcolm came to the crease and was very patient to get the score to 77 before losing another wicket. Andrew Christides then came in

and contributed 33 and Ricky Ramsdale helped out too with 27 to give the Parkers the upper hand. Rowan Charles then belted 28 late in the inning to help Delacombe park to 9/235 in its 80 overs. Malcolm finished unbeaten on 87. Luke Collins claimed 3/46 for the Ridge off 17 overs while James Abbott and Nick McNamara picked up two wickets each. The Ridge lost wickets in quick succession and despite Michael Holmes and Ed Aarons getting things back on track, a direct hit from Nick Christides saw Holmes head to the sheds run out and it was all over at that point.