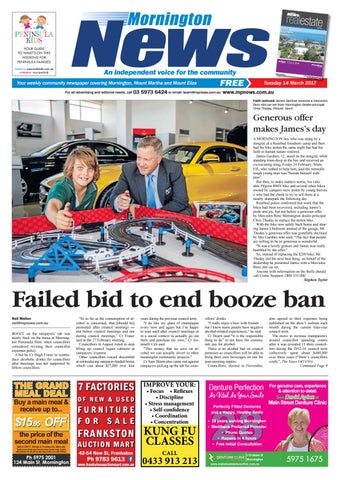 Generous offer makes James’s day A MORNINGTON boy who was stung by a stingray at a Rosebud foreshore camp and then had his bike stolen the same night has had his faith in human nature restored. James Gardner, 12, stood on the stingray while standing knee-deep in the bay and received an excruciating sting, Friday 24 February. Mum Fifi, who rushed to help him, said the normally tough young man was “beside himself with pain”. But then, to make matters worse, his valuable Pilgrim BMX bike and several other bikes owned by campers were stolen by young thieves – who had the cheek to try to sell them at a nearby skatepark the following day. Rosebud police confirmed last week that the bikes had been recovered, including James’s pride and joy, but not before a generous offer by Mercedes Benz Mornington dealer-principal Chris Thoday to replace the stolen bike. With the bike now safely back home and sharing James’s bedroom instead of the garage, Mr Thoday’s generous offer was gratefully declined by Mrs Gardner who said: “The fact that people are willing to be so generous is wonderful. “It was a lovely gesture and James was really humbled by the offer.” So, instead of replacing the $200 bike, Mr Thoday did the next best thing: on behalf of the dealership he presented James with a Mercedes Benz slot car set. Anyone with information on the thefts should call Crime Stoppers 1800 333 000. Stephen Taylor

Failed bid to end booze ban Neil Walker neil@mpnews.com.au BOOZE on the ratepayers’ tab was nearly back on the menu at Mornington Peninsula Shire when councillors considered revising their councillor expenses policy. A bid by Cr Hugh Fraser to reintroduce alcoholic drinks for councillors after meetings was not supported by fellow councillors.

“In so far as the consumption of alcohol is concerned, that [should be] permitted after council meetings — not before council meetings and not during council meetings,” Cr Fraser said at the 27 February meeting. Councillors in August voted to stop filling up council liquor cabinets at ratepayers’ expense. Other councillors voiced discomfort at reintroducing ratepayer-funded booze which cost about $27,000 over four

years during the previous council term. “I do like my glass of champagne every now and again but I’m happy to wait until after council meetings or in a social context to actually go out there and purchase my own,” Cr Antonelli Celi said. “This money that we save on alcohol we can actually divert to other meaningful community projects.” Cr Sam Hearn also came out against ratepayers picking up the tab for coun-

cillors’ drinks. “I really enjoy a beer with friends … but I know many people have negative alcohol-related experiences,” he said. Cr Hearn said “it is the responsible thing to do” to not have the community pay for alcohol. There is no alcohol ban on council premises so councillors will be able to bring their own beverages on site for post-meeting tipples. Councillors, elected in November,

Denture Perfection As Vital As Your Smile

also agreed to their expenses being published on the shire’s website each month during the current four-year council term. The move to increase transparency around councillor spending comes after it was revealed 11 shire councillors during the 2012-16 council term collectively spent about $480,000 over three years (“Shire’s councillors costly”, The News 14/11/16). Continued Page 9