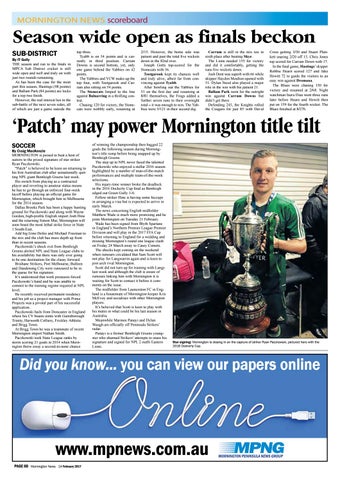 By IT Gully THE season and run to the finals in MPCA Sub District cricket is still wide open and well and truly on with just two rounds remaining. As has been the case for the most part this season, Hastings (98 points) and Ballam Park (84 points) are locks for a top two finish. However, the real interest lies in the sub-battle of the next seven sides, all of which are just a game outside the

top three. Tyabb is on 54 points and is currently in third position. Carrum Downs is second bottom, yet, only one game behind the Yabbies on 42 points. The Yabbies and YCW make-up the top four, with Tootgarook and Carrum also sitting on 54 points. The Stonecats limped to the line against Balnarring in a thrilling contest. Chasing 120 for victory, the Stonecats were wobbly early, resuming at

2/15. However, the home side was patient and past the total five wickets down in the 82nd over. Joseph Gotts top-scored for the Stonecats with 36. Tootgarook kept its chances well and truly alive, albeit far from convincing against Tyabb. After bowling out the Yabbies for 51 on the first day and resuming at 8/81 themselves, the Frogs added a further seven runs to their overnight total – it was enough to win. The Yabbies were 5/121 in their second dig.

Carrum is still in the mix too in sixth place after beating Skye. The Lions needed 155 for victory and did it comfortably, getting the runs five wickets down. Josh Dent was superb with 66 while skipper Hayden Moulton opened with 51. Dylan Steed also played a major role in the win with his patient 21. Ballam Park went for the outright win against Carrum Downs but didn’t get there. Defending 245, the Knights rolled the Cougars for just 85 with David

Cross getting 3/30 and Stuart Plunkett snaring 2/20 off 15. Chris Jones top scored for Carrum Down with 17. In the final game, Hastings’ skipper Robbie Hearn scored 127 and Jake Hewitt 72 to guide the visitors to an easy win against Dromana. The Blues were chasing 150 for victory and resumed at 2/68. Night watchman Isuru Dias went three runs later before Hearn and Hewitt then put on 159 for the fourth wicket. The Blues finished at 8/276.

By Craig MacKenzie MORNINGTON is poised to beat a host of suitors to the prized signature of star striker Ryan Paczkowski. “Patch” is believed to be keen on returning to his first Australian club after sensationally quitting NPL giant Bentleigh Greens last week. His switch from playing as a contracted player and reverting to amateur status means he has to go through an enforced four-week layoff before playing an official game for Mornington, which brought him to Melbourne for the 2014 season. Dallas Brooks Park has been a happy hunting ground for Paczkowski and along with Wayne Gordon, high-profile English import Josh Hine and the returning Simon Mur, Mornington will soon boast the most lethal strike force in State 1 South-East. Add big Gino Defeo and Michael Freeman to the mix and the club has more depth up front than in recent seasons. Paczkowski’s shock exit from Bentleigh Greens alerted NPL and State League clubs to his availability but there was only ever going to be one destination for the classy forward. Brisbane Strikers, Port Melbourne, Bulleen and Dandenong City were rumoured to be in the queue for his signature. It’s understood that work pressures forced Paczkowski’s hand and he was unable to commit to the training regime required at NPL level. He recently received permanent residency and his job as a project manager with Prime Projects was a pivotal part of his successful application. Paczkowski hails from Doncaster in England where his CV boasts stints with Gainsborough Trinity, Harworth Colliery, Frickley Athletic and Brigg Town. At Brigg Town he was a teammate of recent Mornington import Nathan Smith. Paczkowski took State League ranks by storm scoring 21 goals in 2014 when Mornington threw away a second-to-none chance

of winning the championship then bagged 22 goals the following season during Mornington’s title romp before being snapped up by Bentleigh Greens. The step up to NPL never fazed the talented Paczkowski who enjoyed a stellar 2016 season highlighted by a number of man-of-the-match performances and multiple team-of-the-week selections. His injury-time winner broke the deadlock in the 2016 Dockerty Cup final as Bentleigh edged out Green Gully 1-0. Fellow striker Hine is having some hiccups in arranging a visa but is expected to arrive in early March. The news concerning English midfielder Matthew Wade is much more promising and he joins Mornington on Tuesday 21 February. Wade has been signed from Blyth Spartans in England’s Northern Premier League Premier Division and will play in the 2017 FFA Cup before returning to England for a wedding and missing Mornington’s round one league clash on Friday 24 March away to Casey Comets. The shocks kept coming on the weekend when rumours circulated that Sam Scott will not play for Langwarrin again and is keen to join arch rival Mornington. Scott did not turn up for training with Langy last week and although the club is aware of rumours linking him with Mornington it is waiting for Scott to contact it before it comments on the issue. The midfielder from Launceston FC in England is a housemate of Mornington keeper Kris McEvoy and socialises with other Mornington players. It’s believed that Scott is keen to play with his mates in what could be his last season in Australia. Meanwhile Marinos Panayi and Dylan Waugh are officially off Peninsula Strikers’ radar. Panayi is a former Bentleigh Greens youngster who shunned Strikers’ attempts to snare his signature and signed for NPL 2 outfit Eastern Lions.

Star signing: Mornington is closing in on the capture of striker Ryan Paczkowski, pictured here with the 2016 Dockerty Cup.