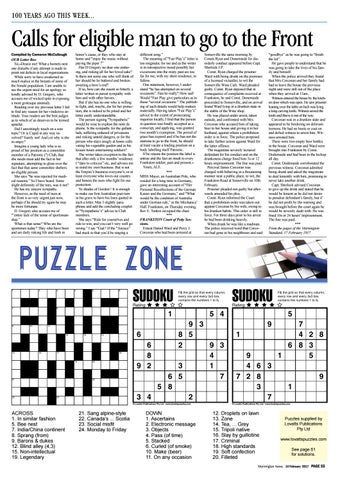 Calls for eligible man to go to the Front Compiled by Cameron McCullough OUR Letter Box. Sir,–Dearie me! What a hornets nest one disturbs if any attempt is made to point out defects in local organizations. While sorry to have awakened so much malice in the breasts of some of the female population. I am unable to see the urgent need for an apology so kindly advised by D. Gregory, who accuses me of wicked spite in exposing a most grotesque anomaly. Reading over my previous letter I fail to find any reason for her vindictive attitude. Your readers are the best judges as to which of us deserves to be termed spiteful. Did I unwittingly touch on a sore topic? Or is Cupid in any way involved? Surely not! And yet why is she so angry? Imagine a young lady who is so proud of her position as a committee member of a Patriotic (?) Club, that she needs must add the fact to her signature, attempting to gloss over the fact that that same committee shelters an eligible person. She says “he was rejected for medical reasons.” So I have heard. Some slight deformity of the toes, was it not? He has my sincere sympathy. However, as the need of men at the front is so very urgent just now, perhaps if he should try again he may be more fortunate. D. Gregory also accuses me of “’entire lack of the sense of sportsmanship.” What is that sense? Who are the sportsmen today? They who have been and are daily risking life and limb in

honor’s cause, or they who stay at home and “enjoy the music without paying the piper ?” Has D Gregory no dear one enduring, and risking all for her loved sake? Is there not some one who will think of her should he lie battered and broken awaiting a hero’s end? If so, how can she resent so bitterly a letter written in purest sympathy with him and with other heroes. But if she has no one who is willing to fight, and, maybe, die for her protection, she is indeed to be pitied and her letter easily understandable. The person signing “Sympathetic” would be wise to explain the nom de plume. Is the sympathy for the gallant lads, suffering unheard of privations and risking untold dangers, or for the person who stays snugly at home cultivating his vegetable garden and in his leisure hours entertaining soldiers? The writer takes exception to the fact that after only a few months’ residence I “dare to criticize” etc, and advises me to mind my own business. But is not the Empire’s business everyone’s, or at least everyone who loves our country and honors the men who fight for our protection. Ye shades of Gordon ! It is enough to make our first Australian poet turn in his grave to have his lines quoted in such a letter. May I slightly paraphrase and add the concluding couplet to “Sympathetic’s” advice to Club members. She says “Ride for yourselves and ride to win, and you can’t very well go wrong.” I say “Gad ! If the “Anzacs” had stuck to that you’d be singing a

different song.” The meaning of “Fair Play’s” letter is too enigmatic for me and as the writer is in retrospective mood possibly her excursions into the misty past are too far for me, with my short residence, to follow. One statement, however, I understand “he has attempted on several occasions”. Has he really? How sad! Would “Fair Play give particulars as to those “several occasions.” The publishing of such details would help matters materially. Having taken “Fair Play’s” advice to the extent of prosecuting inquiries locally, I find that the person in question was finally accepted as a conscript, and applying, was granted two month’s exemption. The period of grace has expired and if he has not the stamina to go to the front, he should at least vacate a leading position on a body labelling itself Patriotic. If he retains the position the label is untrue and the fact an insult to every Frankston soldier, past and present.– Yours, AI.F. *** MISS Mayer, an Australian Pole, who resided for a long time in Germany, gave an interesting account of “Her Personal Recollections of the German Kaiser and the Germans,” and “What would he the condition of Australia under German rule,” in the Mechanics’ Hall. Frankston, on Thursday evening. Rev E. Tonkin occupied the chair. *** FRANKSTON Court of Petty Sessions. Ernest Daniel Ward and Percy J. Corcoran who had been arresred at

Somerville the same morning by Consts Ryan and Donemaide for disorderly conduct appeared before Capt. Sherlock J.P. Const. Ryan charged the prisoner Ward with being drunk on the premises of a licensed victualler, to wit the Somerville Wine Cafe. Ward pleaded guilty. Const. Ryan deposed that in consequence of complaints received at Frankston, he and Const. Donemaide proceeded to Somerville, and on arrival found Ward lying in a drunken state in the stable of the Wine shop. He was placed under arrest, taken outside, and confronted with Mrs Corcoran who accused him of taking beer to her house and giving it to her husband, against whom a prohibition order is in force. The police proposed to take further action against Ward for the latter offence. The magistrate severely lectured defendant for his conduct and on the drunkeness charge fined him 5s or 12 hours imprisonment. The fine was paid. Percival James Corcoran was charged with behaving in a threatening manner near a public place, to wit, the Frankston Road at Somerville on 10th February. Prisoner pleaded not guilty but afterwards amended his plea. Const. Ryan informed the Court that a prohibition order was taken out against Corcoran by his wife, owing to his drunken habits. This order is still in force. For three days prior to his arrest he had been drinking heavily. When drunk he was like a madman. The police received word that Corcoran had gone to his neighbours and said

“goodbye” as he was going to “finish the lot”. He gave people to understand that he was going to take the lives of his family and himself. When the police arrived they found that Mrs Corcoran and her family had had to leave the house the previous night and were still out of the place when they arrived at 11am. Witness entered the house by the kitchen door which was open. He saw prisoner leaning over the table on hich was lying a long carving knife. Witness seized the knife and threw it out of the way. Corcoran was in a drunken state and appeared to be bordering on delirium tremens. He had no boots or coat on and defied witness to arrest him. Witness arrested him. There were two empty beer bottles in the house. Corcoran and Ward were brought into Frankston by Const. Dodemaide and had been in the lockup all day. Const. Dodemaide corroborated the previous witness. Corcoran admitted being drunk and asked the magistrate to deal leniently with him, promising to never take another drink. Capt. Sherlock advised Corcoran to give up the drink and stated that he would be lenient as he did not desire to penalise defendant’s family, but if he did not profit by the warning and was brought before the court again he would be severely dealt with. He was fined 10s or 24 hours’ imprisonment. The fine was paid. *** From the pages of the Mornington Standard, 17 February 1917