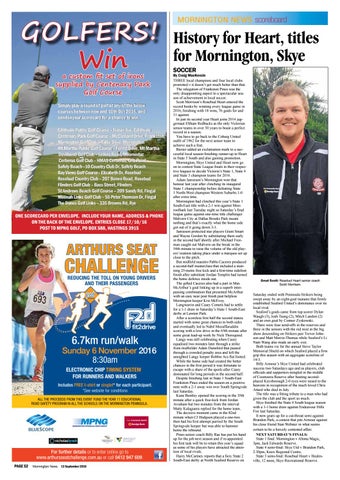 By Craig MacKenzie THREE local champions and four local clubs promoted – it doesn’t get much better than that. The relegation of Frankston Pines was the only disappointing aspect to a spectacular season of achievement in local soccer. Scott Morrison’s Rosebud Heart entered the record books by winning every league game in 2016, finishing with 18 wins, 76 goals for and 11 against. In just its second year Heart joins 2014 juggernaut Eltham Redbacks as the only Victorian senior teams in over 50 years to boast a perfect record in a season. You have to go back to the Coburg United outfit of 1962 for the next senior team to achieve such a feat. Baxter added an exclamation mark to a successful local season finishing runner-up to Heart in State 5 South and also gaining promotion. Mornington, Skye United and Heart now go on to contest State League finals in their respective leagues to decide Victoria’s State 1, State 4 and State 5 champion teams for 2016. Adam Jamieson’s Mornington won that honour last year after clinching its inaugural State 1 championship before defeating State 1 North-West champion Western Suburbs 1-0 after extra time. Mornington had clinched this year’s State 1 South-East title with a 2-1 win against Mooroolbark last Tuesday night so Saturday’s final league game against one-time title challenger Malvern City at Dallas Brooks Park meant nothing and that’s exactly what the home side got out of it going down 3-1. Jamieson protected star players Grant Smart and Wayne Gordon by substituting them early in the second half shortly after Michael Freeman caught out Malvern on the break in the 54th minute to raise the volume of the old players’ reunion taking place under a marquee set up close to the pitch. But midfield maestro Pablo Caceres produced a second-half masterclass that included a stunning 25-metre free kick and a first-time sidefoot finish after substitute Jordan Templin had turned the home defence inside out. The gifted Caceres also had a part in Max McArthur’s goal linking up in a superb interpassing combination that presented McArthur with an easy near post finish past helpless Mornington keeper Kris McEvoy. Langwarrin and Casey Comets had to settle for a 1-1 draw in Saturday’s State 1 South-East derby at Lawton Park. After a scoreless first half the second stanza started with some great chances to both sides and eventually led to Nabil Mozaffaruddin scoring with a low drive in the 65th minute after some great lead-up work by Nick Thorogood. Langy was still celebrating when Casey equalised two minutes later through a strike from midfielder Adam Dunsford that passed through a crowded penalty area and left the unsighted Langy keeper Robbie Acs flat footed. While the home side had created the better chances in the first period it was fortunate to escape with a share of the spoils after Casey dominated for long periods in the second half. Despite finishing last in State 1 South-East Frankston Pines ended the season on a positive note with a 2-1 away win over South Springvale last Saturday. Kane Bentley opened the scoring in the 35th minute after a quick free-kick from Jordan Avraham but two minutes from the interval Matty Kalagianis replied for the home team. The decisive moment came in the 82nd minute when CJ Hodgson played a one-two then had his first attempt parried by the South Springvale keeper but was able to hammer home the rebound. Pines senior coach Billy Rae has put his hand up for the job next season and if re-appointed his first task will be to retain this year’s squad as some of his players have attracted the attention of local rivals. Harry McCartney reports that a fiery State 2 South-East derby at North Seaford Reserve on

Saturday ended with Peninsula Strikers being swept away by an eight-goal tsunami that firmly established Seaford United’s dominance over its local rival. Seaford’s goals came from top scorer Dylan Waugh (3), Josh Tsung (2), Mitch Landon (2) and an own goal by Connor Zyskowski. There were four send-offs in the reserves and three in the seniors with the red mist in the big show descending on Strikers pair Trevor Johnson and Matt Morris-Thomas while Seaford’s Li Nam Wang also made an early exit. Both teams vie for the annual Steve Taylor Memorial Shield on which Seaford placed a firm grip this season with an aggregate scoreline of 14-3. Billy Armour’s Skye United had celebrated success two Saturdays ago and as players, club officials and supporters mingled in the middle of Coomoora Reserve after beating secondplaced Keysborough 2-0 eyes were raised to the heavens in recognition of the much loved Chris Attard who died in July. The title was a fitting tribute to a man who had given the club and the sport so much. Skye finished the State 4 South league season with a 1-1 home draw against Endeavour Hills Fire last Saturday. It now gears up for a cut-throat semi against Brandon Park, a contest that pits Armour against his close friend Stan Webster in what seems certain to be a fiercely contested affair. NEXT SATURDAY’S FINALS: State 1 final: Mornington v Altona Magic, 3pm, Jack Edwards Reserve. State 4 semi-final: Skye Utd v Brandon Park, 2.30pm, Knox Regional Centre. State 5 semi-final: Rosebud Heart v Healesville, 12 noon, Skye Recreational Reserve.