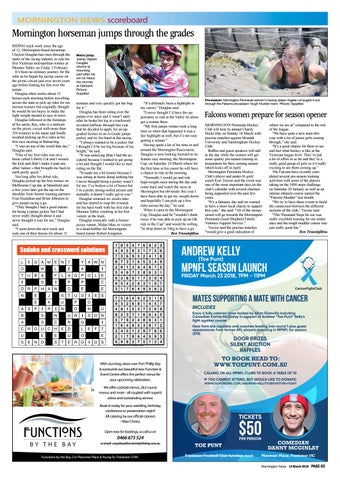 Mornington horseman jumps through the grades RIDING track work since the age of 12, Mornington-based horseman Clayton Douglas has risen through the ranks of the racing industry to ride his first Victorian metropolitan winner at Moonee Valley on Friday 2 February. It’s been no ordinary journey for the rider as he began his racing career on the picnic circuit just over seven years ago before finding his feet over the jumps. Douglas often works about 15 horses each morning before travelling across the state to pick up rides for numerous trainers but originally thought he would be too heavy to make the light weight needed to race in town. Douglas followed in the footsteps of his uncle, Ray, who is a stalwart on the picnic circuit with more than 350 winners to his name and fondly recalled picking up five rides at his first race meeting at Balnarring. “I was on top of the world that day,” Douglas said. “One of my first rides was on a horse called Liberty Cat and I missed the kick and didn’t make it past any other runner – that brought me back to earth pretty quick.” Not long after his debut ride, Douglas picked up his first winner on Melbourne Cup day at Mansfield and a few years later got the tap on the shoulder from former training partners Fran Houlahan and Brian Johnston to give jumps racing a go. “They thought I had a good stature for being a jumps jockey but I had never really thought about it and never thought it was for me,” Douglas said. “I went down the next week and rode one of their horses for about 15

Metro jump: Jockey Clayton Douglas returns to mounting yard after his win on About the Journey at Oakbank. Picture: Supplied

minutes and very quickly got the bug for it.” Douglas has been riding over the jumps ever since and it wasn’t until after he broke his leg in a trackwork accident halfway through last year that he decided to apply for an upgraded licence to an A-Grade jumps jockey and try his hand at flat racing. “I always wanted to be a jockey but I thought I’d be too big because of my height,” he said. “It was annoying [that I had the accident] because I wanted to get going a bit and thought I would like to start riding on the flat. “It made me a bit keener because I was sitting at home doing nothing but I never thought being a jockey wasn’t for me. I’ve broken a lot of bones but I’m a pretty strong-willed person and mentally it doesn’t really get to you.” Douglas returned six weeks later and has started to reap the rewards for his hard work with his first ride at Moonee Valley resulting in his first victory at the track. Douglas ironically rode a former picnic runner, Midas Man, to victory in a head-bobber for Morningtonbased trainer Robert Kingston.

“It’s definitely been a highlight in my career,” Douglas said. “I never thought I’d have the opportunity to ride at the Valley let alone get a winner there. “My first jumps winner took a long time so when that happened it was a fair highlight as well, but it’s not easy getting a winner.” Having spent a lot of his time in and around the Mornington Racecourse, Douglas is now looking forward to its feature race meeting, the Mornington Cup, on Saturday 24 March where for the first time in his career he will have a chance to ride at the meeting. “Normally I would go and ride high-weight races during the day and come back and watch the races at Mornington but obviously this year I have been able to get my weight down and hopefully I can pick up a few rides across the day,” he said. When it came to the Mornington Cup, Douglas said he “wouldn’t think twice if he was able to pick up an OK ride in the Cup” and would be willing “to drop down to 54kg to have a go. Ben Triandafillou

Falcons women prepare for season opener MORNINGTON Peninsula Hockey Club will host its annual Charity Sticks Day on Sunday 18 March with practise matches against Monash University and Sandringham Hockey Club. Raffles and guest speakers will add to the day while the women will get some quality pre-season training in preparation for their coming season which kicks off in April. Mornington Peninsula Hockey Club’s player and under-16 girls’ coach Kim Trezise said the event was one of the most important days on the club’s calendar with several charities being supported over the past few years. “It’s a fantastic day and we wanted to have a more local charity to support this year,” she said. “All of the money raised will go towards the Mornington Peninsula Good Shepherd Family Violence Support Service.” Trezise said the practise matches “would give a good indication of

where we are at” compared to the rest of the league. “We have quite a new team this year with a lot of junior girls coming through,” she said. “It’s a good chance for them to see and feel what hockey is like at the Victorian league level. They’ve put a lot of effort in so far and they’re a really good group of girls so it’s really exciting to see them coming up.” The Falcons have recently completed several pre-season training activities with some of the players taking on the 1000 steps challenge on Saturday 20 January as well as an intense obstacle course named the “Falcons Mudder” last month. “We try to have these events to build the connection between the different sections of the club,” Trezise said. “The Thousand Steps hit out was really excellent training for our endurance and the tough mudder course was just really good fun.” Ben Triandafillou

MATES SUPPORTING a mate with cancer INCLUDES Enjoy a fully catered show hosted by Allan Glanville including Comedian Danny McGinlay in support of Andrew “Toe Punt” Kelly’s fight against cancer. Hear from the captains and coaches leading into round 1 plus guest appearances from former AFL players debuting in MPNFL for season 2018.

TO BOOK HEAD TO: WWW.TOEPUNT.COM.AU CALLING ON ALL MPNFL CLUBS TO BOOK A TABLE OF 10 IF YOU CANNOT ATTEND, BUT WOULD LIKE TO DONATE: WWW.GOFUNDME.COM/ANDREW-KELLYTOEPUNTTHE-FIGHT

Book in today for your wedding, birthday, conference or presentation night! All catering by our official caterers - Wise Choice.

Open now for bookings, so call us on