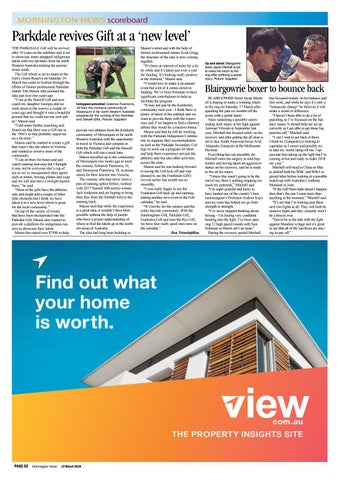 Parkdale revives Gift at a ‘new level’ THE PARKDALE Gift will be revived after 54 years on the sidelines and is set to showcase some untapped indigenous talent with two sprinters from far north Western Australia making the journey down south. The Gift which is set to return to the Gerry Green Reserve on Saturday 24 March has come to fruition through the efforts of former professional Parkdale runner Tim Mason who pursued the idea just over two years ago. “I ran at the Stawell Gift and now coach my daughter Georgia and we went down to the reserve a couple of years ago and thought it was a beautiful ground that we could run our own gift at,” Mason said. “I did some further searching and found out that there was a Gift run in the 1960’s so that probably urged me on a bit more.” Mason said he wanted to create a gift that wasn’t like the others in Victoria and wanted to involve more of the community. “I can sit there for hours and just watch running non-stop but I thought it may not be everyone else’s cup of tea so we’ve incorporated other sports such as tennis, boxing, pilates and yoga and we will also have a twilight market there,” he said. “Most of the gifts have the athletics side and might add a couple of other little elements but I think we have taken it to a new level which is great for the local community.” On top of the variety of events that have been incorporated into the Parkdale Gift, Mason also wanted to provide a platform for indigenous runners to showcase their talent. Mason has raised over $7500 to help

Untapped potential: Solomon Puemorra, 16 from the Kimberly community of Mowanjum in far north Western Australia prepares for the running of the Parkdale and Stawell Gifts. Picture: Supplied

provide two athletes from the Kimberly community of Mowanjum in far north Western Australia with the opportunity to travel to Victoria and compete in both the Parkdale Gift and the Stawell Gift which will run a week later. Mason travelled up to the community of Mowanjum two weeks ago to meet the cousins, Solomon Puemorra, 16, and Deqwayne Puemorra, 18, in preparation for their descent into Victoria. The cousins, who had never worn a pair of running spikes before, worked with 2017 Stawell 400-metres winner Jack Anderson and are hoping to bring their flair from the football field to the running track. Mason said that while the experience is a great idea, it wouldn’t have been possible without the help of people who have a proper understanding of where to find the talent up in the northern areas of Australia. The idea had long been building in

Mason’s mind and with the help of former professional runner Scott Grigg, the structure of the idea is now coming together. “It’s been an interest of mine for a little while and it’s taken just over a year for funding. It’s looking really positive at the moment,” Mason said. “I would love to make it an annual event but a lot of it comes down to funding. We’ve been fortunate to have significant contributions to help us facilitate the program. “It may not just be the Kimberley community next year - I think there is plenty of talent in the outback and we want to provide them with the experience and if we happen to find a talented athlete that would be a massive bonus.” Mason said that he will be working with the Parkdale Indigenous Community to organise their accommodation as well as the Parkdale Secondary College to work out a program for them and help them experience not just the athletics side but also other activities across the state. Mason said he was looking forward to seeing the Gift kick off and was pleased to see the Frankston Gift’s revival earlier last month run so smoothly. “I was really happy to see the Frankston Gift back up and running, adding another new event to the Gift calendar,” he said. “It’s terrific for the runners and the entire bayside community. With the Sandringham Gift, Parkdale Gift, Frankston Gift and now the Rye Gift, we have four really good ones now on the calendar.” Ben Triandafillou

Up and about: Blairgowrie boxer Jayde Mitchell is set to make his return to the ring after suffering a spinal injury. Picture: Supplied.

Blairgowrie boxer to bounce back BLAIRGOWRIE boxer Jayde Mitchell is hoping to make a winning return to the ring on Saturday 17 March after spending the past six months off the scene with a spinal injury. Since sustaining a possible careerending neck injury in his fight against Aniwaer Yilixiati in September last year, Mitchell has focused solely on his recovery and after getting the all clear is set to face South American boxer Ariel Alejandro Zampedri at the Melbourne Pavilion. Everything has run smoothly for Mitchell since his surgery in mid-September and having taken an aggressive stance on his recovery, said he is ready to fire on his return. “I knew this wasn’t going to be the end of me, there’s nothing stopping me reach my potential,” Mitchell said. “I’m super grateful and lucky to have landed one of the country’s best neurosurgeon’s Professor Andrew Kaye and my team has helped me go from strength to strength. “I’ve never stopped thinking about boxing - I’m feeling very confident heading into the fight. I’ve been sparring 12 high paced rounds with Sam Soloman so fitness isn’t an issue.” During the recovery period Mitchell

has focussed mainly on his balance and feet work, and while he says it’s only a “minuscule change” he believes it will make a world of difference. “I haven’t been able to do a lot of punching so I’ve focussed on the balance issues. It should help me set up correctly so I am able to get those big punches off,” Mitchell said. “I can’t wait to get back in there. I think he (Zampedri) is looking to capitalise as I return and possibly try to take my world rating off me. I appreciate him taking up the fight but I’m coming in hot and ready to make 2018 my year.” Mitchell will head to China in May to defend both his WBC and WBA regional titles before looking at a possible match-up with Australia’s Anthony Mundine in June. “If the Jeff Horn fight doesn’t happen then that’s the one I want more than anything at the moment,” Mitchell said. “It’s not that I’m looking past these next two fights at all. They will both be massive fights and they certainly won’t be a breeze over. “Just to be in the talk with the fight against Mundine is huge and it’s great to see that all of the sacrifices are staying to pay off.”