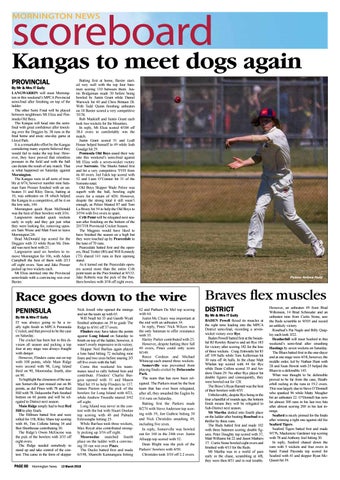 By Mr & Mrs IT Gully LANGWARRIN will meet Mornington in this weekend’s MPCA Provincial semi-final after finishing on top of the ladder. The other Semi Final will be played between neighbours Mt Eliza and Peninsula Old Boys. The Kangas will head into the semifinal with great confidence after knocking over the Doggies by 38 runs in the final home and away one-day game at Lloyd Park. It is a remarkable effort by the Kangas considering many experts believed they would fail to make the top four. However, they have proved that relentless pressure in the field and with the ball can dictate the result of any match. That is what happened on Saturday against Mornington. The Kangas were in all sorts of trouble at 6/74, however number nine batsman Sam Prosser finished with an unbeaten 31 and Riley Davie, batting at 10, was unbeaten on 18 which helped the Kangas to a competitive, all be it on the low side, 144. Mornington quick Ryan McDonald was the best of their bowlers with 3/16. Langwarrin needed quick wickets early in reply and they got just what they were looking for, removing openers Sam Wiese and Matt Foon to leave Mornington 2/6. Brad McDonald top scored for the Doggies with 33 while Ryan Mc Donald was next best with 21. Langwarrin used six bowlers to remove Mornington for 106, with Adam Campbell the best of them with 2/13 off eight overs. Sam and Jake Prosser picked up two wickets each. Mt Eliza stormed into the Provincial semi-finals with a convincing win over Baxter.

Batting first at home, Baxter started very well with the top four batsmen scoring 110 between them. Justin Bridgeman made 50 before being bowled by Justin Grant while Daniel Warwick hit 40 and Chris Brittain 28. With Todd Quinn finishing unbeaten on 18 Baxter scored a very competitive 7/178. Rob Maskiell and Justin Grant each took two wickets for the Mounties. In reply, Mt Eliza scored 4/184 off 38.4 overs to comfortably win the match. Justin Grant scored 51 and Lyall House helped himself to 49 while Josh Goudge hit 29. Peninsula Old Boys eased their way into this weekend’s semi-final against Mt Eliza with a seven-wicket victory over Sorrento. The Sharks batted first and hit a very competitive 7/193 from its 40 overs. Jed Falck top scored with 52 and Liam O’Connor hit 31 of the Sorrento total. Old Boys Skipper Wade Pelzer was superb with the ball, bowling eight overs for a return of 4/20. However, despite the strong total it still wasn’t enough, as Pelzer blasted 87 and Tom La Brooy hit 54 to help the Old Boys to 3/194 with five overs to spare. Crib Point will be relegated next season after finishing on the bottom of the 2017/18 Provincial Cricket Season. The Magpies would have liked to have finished the season on a high but they were touched up by Pearcedale to the tune of 70 runs. Pearcedale batted first and the openers, Brad Trotter (80) and Will Kennedy (75) shared 141 runs in their opening stand. As it turned out the Pearcedale openers scored more than the entire Crib point team as the Pies finished at 9/133. Jake Roberts was the pick of the Panthers bowlers with 3/18 off eight overs.

Race goes down to the wire

By Mr & Mrs IT Gully IT was always going to be a really tight finish in MPCA Peninsula Cricket, and that proved to be the case on Saturday. The cricket has been hot in this division all season and picking a top four at any stage was always fraught with danger. However, Flinders came out on top with 108 points, while Main Ridge were second with 98, Long Island third on 90, Moorooduc fourth, also on 90. To highlight the closeness of the season Somerville just missed out on 86 points, as did Pines with 78 and Red Hill with 78. Delacombe Park finished bottom on 60 points and will be relegated to District next season. Main Ridge simply had to beat Red Hill to play finals. The Hillmen batted first and were rolled for 158, Riley Shaw top scoring with 46, Tim Collette hitting 34 and Ben Shorthouse contributing 30. The Ridge’s Owen McEncroe was the pick of the bowlers with 3/35 off eight overs. The Ridge needed somebody to stand up and take control of the contest. This came in the form of skipper

Nick Jewell who opened the innings and set the team up with 65. Will Noall hit 35 and Gareth Wyatt finished unbeaten on 39 to guide The Ridge to 4/161 off 37 overs. Flinders may have taken the points against Long Island on Saturday to finish on top of the ladder, however, it wasn’t overly impressive in its victory. Skipper Neil Barfuss again played a lone hand hitting 72 including nine fours and two sixes before snaring 3/5 off five overs with the ball. Come this weekend his teammates need to rally behind him and contribute. Flinders’ Charlie Burgess opened with 31 and Mason Mail hit 19 to help Flinders to 157. James Paxton was the pick of the bowlers for Long Island with 4/23, while Andrew Tweedle snared 3/42 off eight. Long Island was never in the contest with the bat with Stuart Doolan top scoring with 40 and Pubudu Edirisinghe hitting 25. While Barfuss took three wickets, Max Royal also contributed strongly picking up 3/16 off eight. Moorooduc snatched fourth place on the ladder with a convincing 50 run win over Pines. The Ducks batted first and made 6/198, Shamith Kannangara hitting

62 and Pathum De Mel top scoring with 64. Justin Mc Cleary was important at the end with an unbeaten 34. In reply, Pines’ Nick Wilcox was the only batsman to offer resistance with 35. Harley Parker contributed with 25. However, despite batting their full 40 overs, Pines could only score 9/149. Reece Cordeux and Michael Whincup each snared three wickets. Somerville was prevented from playing finals cricket by Delacombe Park. The team that has now been relegated. The Parkers must be the best team that has ever been relegated, after all, they smashed the Eagles by 114 runs on Saturday. Batting first the Parkers made 8/274 with Steve Anderson top scoring with 59, Jon Guthrie hitting 50 and Nick Christides smashing 49, including five sixes. In reply, Somerville was bowled out for 160 in the 24th over. Justin Allsopp top scored with 52. Dean Blight was the pick of the Parkers’ bowlers with 4/50. Christides took 3/10 off 2.2 overs.

By Mr & Mrs IT Gully BADEN Powell flexed its muscles at the right time leading into the MPCA District semi-final, recording a sevenwicket victory over Rye. Baden Powell batted first at the beautiful RJ Rowley Reserve and set Rye 183 for victory after scoring 182 for the loss of three wickets. Craig Entwistle hit 85 off 109 balls while Tom Kellerman hit 30 runs off 46 balls. In the chase Matt Whelan top scored with 44 for Rye while Dean Collins scored 35 and Andrew Dunn 29. No other Rye player hit double figures and consequently, they were bowled out for 128. The Brave’s Ryan Barnett was the best of their bowlers with 4/35. Unbelievably, despite Rye being in the four a handful of rounds ago, the bottom finish means they will be relegated to Sub-District next season. Mt Martha slotted into fourth place on the ladder after beating Rosebud in a thriller by three runs. The Buds batted first and made 102 with three batsmen scoring double figures. Peter Doughty top scored with 37, Matt Williams hit 22 and Jason Mathers 17. Curtis Stone bowled eight overs and finished with 4/13 for the Reds. Mt Martha was in a world of pain early in the chase, scrambling at 4/8, they were then 8/51 and in real trouble.

However, an unbeaten 49 from Brad Wilkinson, 14 Brad Schreuder and an unbeaten nine from Curtis Stone, saw the Reds scramble to 9/105 and record an unlikely victory. Rosebud’s Pat Nagle and Billy Quigley each took 3/22. Heatherhill will meet Seaford in this weekend’s semi-final after smashing Hastings by seven wickets on Saturday. The Blues batted first in the one-dayer and at one stage were 4/18, however, the middle order, led by Nathan Hunt with 28 and Sean Hewitt with 25 helped the Blues to a defensible 145. What was thought to be defensible proved to be far from the case, Heatherhill reeling in the runs in 19.2 overs. This was largely due to Steve O’Donnell who spanked 96 while Matty Meagher hit an unbeaten 22. O’Donnell has now hit almost 300 runs in his last two hits after almost scoring 200 in his last innings. Seaford is nicely primed for the finals after winning a tight one against old foe Seaford Tigers. Seaford Tigers batted first and made 9/176, Mackenzie Gardener top scoring with 78 and Anthony Joel hitting 30. In reply, Seaford chased down the runs with 5 wickets and four overs in hand. Faisal Payenda top scored for Seaford with 41 and skipper Ryan McQueen hit 39.