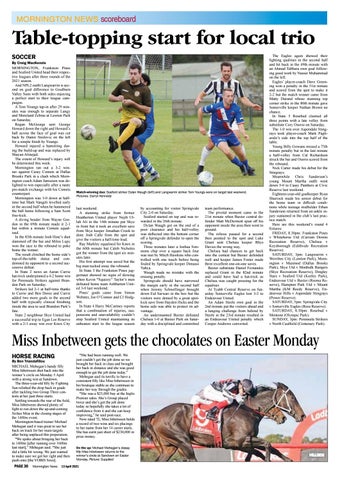 By Craig MacKenzie MORNINGTON, Frankston Pines and Seaford United head their respective leagues after three rounds of the 2021 season. And NPL2 outfit Langwarrin is second on goal difference to Goulburn Valley Suns with both sides enjoying a perfect start to their league campaigns. A Tom Youngs tap-in after 29 minutes was enough to separate Langy and Moreland Zebras at Lawton Park on Saturday. Rogan McGeorge sent George Howard down the right and Howard’s ball across the face of goal was cut back by Damir Stoilovic on the left for a simple finish by Youngs. Howard injured a hamstring during the build-up and was replaced by Shayan Alinejad. The extent of Howard’s injury will be determined this week. Mornington ran out a 3-2 winner against Casey Comets at Dallas Brooks Park in a clash which Mornington coach Adam Jamieson was delighted to win especially after a nasty pre-match exchange with his Comets counterpart. Mornington was 1-0 down at halftime but Mark Vangeli levelled early in the second half when he hammered the ball home following a Sam Scott free-kick. A diving header from Wayne Gordon in the 69th minute made it 2-1 but within a minute Comets equalised. In the 85th minute Josh Hine’s shot slammed off the bar and Milos Lujic won the race to the rebound to poke home the winner. The result clinched the home side’s top-of-the-table status and condemned its opponent to a second successive defeat. In State 2 news an Aaran Currie hat-trick underpinned a 4-2 home win for Peninsula Strikers against Brandon Park on Saturday. Strikers led 2-1 at half-time thanks to Currie and Ben Doree and Currie added two more goals in the second half with typically clinical finishing inside the area to seal Brandon Park’s fate. State 2 neighbour Skye United had a successful trip to Egan Lee Reserve with a 2-1 away win over Knox City

last weekend. A stunning strike from former Heatherton United player Nejib Ullah Ali in the 14th minute put Skye in front but it took an excellent save from Skye keeper Jonathan Crook to deny Josh Calle from the spot and give the visitors a half-time lead. Ray Markley equalised for Knox in the 60th minute but Caleb Nicholes got the winner from the spot six minutes later. His first attempt was saved but the big man tucked away the rebound. In State 3 the Frankston Pines juggernaut showed no signs of slowing when Kevin “Squizzy” Taylor’s men defeated home team Ashburton United 3-0 last weekend. Pines’ goals came from Simon Webster, Joe O’Connor and CJ Hodgson. In State 4 Harry McCartney reports that a combination of injuries, suspensions and unavailability couldn’t stop Seaford United maintaining its unbeaten start to the league season

by accounting for visitor Springvale City 2-0 on Saturday. Seaford started on top and was rewarded in the 26th minute. Dylan Waugh got on the end of a poor clearance and his half-volley was deflected into the bottom corner off a Springvale defender to open the scoring. Three minutes later a Joshua Simmons chip over a square back four was met by Mitch Hawkins who controlled with one touch before being fouled by Springvale keeper Dimassi Yahya. Waugh made no mistake with the ensuing penalty. Springvale should have narrowed the margin early in the second half when Jeremy Schwellinger brought down Eid Sarwari in the box but the visitors were denied by a great spotkick save from Hayden Hicks and the home side was able to protect its advantage. An undermanned Baxter defeated Chelsea 1-0 at Baxter Park on Saturday with a disciplined and committed

team performance. The pivotal moment came in the 21st minute when Baxter central defender Matt McDermott spun off his opponent inside the area then went to ground. The referee paused for a second then pointed to the spot and Luke Grant sent Chelsea keeper Rhys Davies the wrong way. Chelsea had chances to get back into the contest but Baxter defended well and keeper James Foster made three excellent one-on-one saves. Baxter substitute Daniel Fernandes replaced Grant in the 82nd minute and could have had a hat-trick as Chelsea was caught pressing for the equaliser. At Tyabb Central Reserve on Saturday Somerville Eagles lost 3-2 to Endeavour United. An Adam Steele own goal in the 2nd minute put the visitors ahead and a lunging challenge from behind by Steele in the 23rd minute resulted in an Endeavour United penalty which Cooper Andrews converted.

Miss Inbetween gets the chocolates on Easter Monday HORSE RACING

By Ben Triandafillou MICHAEL Mehegan’s handy filly Miss Inbetween shot back into the winner’s circle on Monday 5 April with a strong win at Sandown. The three-year-old filly by Fighting Sun relished the drop back in grade after tackling two Group Three contests at her past three starts. Settling towards the rear of the field, Miss Inbetween showed plenty of fight to run down the up-and-coming Sirileo Miss in the closing stages of the 1400m event. Mornington-based trainer Michael Mehegan said it was great to see her back on track for her main targets after being unplaced this preperation. “We spoke about bringing her back to 1400m [after running over 1600m last start],” Mehegan said. “She just did a little bit wrong. We just wanted to make sure we got her right and then push onto [the VOBIS Sires].

“She had been running well. We just couldn’t get the job done so we brought her back in class and brought her back in distance and she was good enough to get the job done today.” Mehegan said its terrific to have a consistent filly like Miss Inbetween in his boutique stable as she continues to make her way through the grades. “She was a $25,000 buy at the Inglis Premier sales. She’s Group placed twice and she’s got the job done today so hopefully she takes a lot of confidence from it and she can keep improving,” he said post-race. Now rated 72, Miss Inbetween holds a record of two wins and six placings to her name from her 14 career starts. She has earnt just short of $230,000 in prize money. On the up: Michael Mehegan’s classy filly Miss Inbetween returns to the winner’s circle at Sandown on Easter Monday. Picture: Supplied