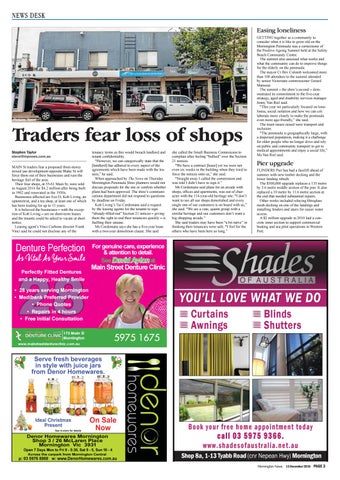 Traders fear loss of shops Stephen Taylor steve@mpnews.com.au MAIN St traders fear a proposed three-storey mixed use development opposite Blake St will force them out of their businesses and ruin the heritage feel of the area. Their four shops, at 55-61 Main St, were sold in August 2014 for $4.2 million after being built in 1902 and renovated in the 1930s. Businesses affected are Eco D, Koh Living, an optometrist, and a tea shop, at least one of which has been trading for up to 15 years. It is believed the businesses – with the exception of Koh Living – are on short-term leases and the tenants could be asked to vacate at short notice. Leasing agent’s Vinci Carbone director Frank Vinci said he could not disclose any of the

Denture Perfection As Vital As Your Smile

tenancy terms as this would breach landlord and tenant confidentiality. “However, we can categorically state that the [landlord] has adhered to every aspect of the agreements which have been made with the lessees,” he said. When approached by The News on Thursday Mornington Peninsula Shire planners would not discuss proposals for the site or confirm whether plans had been approved. The shire’s communications department did not respond to questions by deadline on Friday. Koh Living’s Tui Cordemans said a request by the leasing agents for the tenants to sign “already-filled-out” Section 21 notices – giving them the right to end their tenancies quickly – is fuelling their unease. Ms Cordemans says she has a five-year lease with a two-year demolition clause. She said

Pier upgrade FLINDERS Pier has had a facelift ahead of summer with new timber decking and the lower landing rebuilt. The $500,000 upgrade replaces a 135 metre by 3.6 metre middle section of the pier. It also replaced a 10 metre by 11.6 metre section at the end that needed substantial repairs. Other works included relaying fibreglass mesh decking on one of the landings and installing fenders and stairs for easier water access. A $2 million upgrade in 2010 laid a concrete inner section to support commercial boating and sea pilot operations in Western Port.

she called the Small Business Commission to complain after feeling “bullied” over the Section 21 notices. “We have a contract [lease] yet we were not even six weeks in the building when they tried to force the notices onto us,” she said. “Straight away I called the commission and was told I didn’t have to sign it.” Ms Cordemans said plans for an arcade with shops, offices and apartments, was out of character with the 114-year-old heritage site. “I don’t want to see all our shops demolished and every single one of our customers is on board with us,” she said. “We are a cute, quaint group with a similar heritage and our customers don’t want a big shopping arcade.” She said traders may have been “a bit naïve” in thinking their tenancies were safe. “I feel for the others who have been here so long.”

GETTING together as a community to consider what it is like to grow old on the Mornington Peninsula was a cornerstone of the Positive Ageing Summit held at the Safety Beach Community Centre. The summit also assessed what works and what the community can do to improve things for the elderly on the peninsula. The mayor Cr Bev Colomb welcomed more than 100 attendees to the summit attended by senior Victorians commissioner Gerard Mansour. The summit – the shire’s second – demonstrated its commitment to the five-year strategy, aged and disability services manager Jenny Van Riel said. “This year we particularly focused on loneliness, social isolation and how we can collaborate more closely to make the peninsula even more age-friendly,” she said. The main issues raised were transport and inclusion. “The peninsula is geographically large, with a dispersed population, making it a challenge for older people who no longer drive and rely on public and community transport to get to medical appointments and enjoy a social life,” Ms Van Riel said.