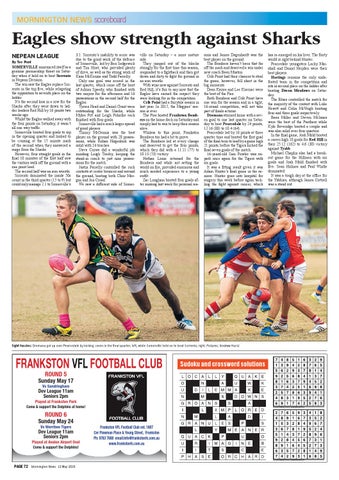 Eagles show strength against Sharks NEPEAN LEAGUE By Toe Punt SOMERVILLE announced itself as a genuine premiership threat on Saturday when it held on to beat Sorrento in Nepean Division. The win saw the Eagles replace Sorrento in the top five, while relegating the opposition to seventh place on the ladder. It’s the second loss in a row for the Sharks after they went down to ladder leaders Red Hill by 16 points two weeks ago. Whilst the Eagles walked away with the four points on Saturday, it wasn’t all one way traffic. Somerville booted four goals to zip in the opening quarter and looked to be cruising at the 15 minute mark of the second when they answered a surge from the Sharks. However, four straight goals in the final 10 minutes of the first half saw the visitors walk off the ground with a one point lead. The second half was an arm wrestle. Sorrento dominated the inside 50s count in the third quarter (15 to 9) but could only manage 2.1 to Somerville’s

3.1. Sorrento’s inability to score was due to the good work of the defence of Somerville, led by Ben Sedgewick and Tim Hirst, who provided plenty of drive, as well as the strong work of Kane McKenzie and Todd Farrelly. Only one goal was scored in the last quarter, which came off the boot of Adrian Speedy, who finished with two majors for the afternoon and 16 possessions in the second half for the Eagles. Tyrren Head and Daniel Grant were outstanding for the Sharks, while Myles Pitt and Leigh Poholke each finished with four goals. Somerville had a much larger spread of good players. Timmy McGennis was the best player on the ground with 28 possessions, while Rohan Hogenbirk was solid with 24 touches. Steve Crowe did a wonderful job minding Leigh Treeby, keeping the stand-in coach to just nine possessions for the match. Justin Farrelly controlled the ruck contests at centre bounces and around the ground, beating both Chris Morgan and Jon Croad. We saw a different side of Somer-

ville on Saturday – a more mature side. They jumped out of the blocks strongly for the first time this season, responded to a fightback and then got down and dirty to fight for ground in an arm wrestle. With wins now against Sorrento and Red Hill, it’s fair to say now that the Eagles have earned the respect they were looking for in the competition. Crib Point had a fairytale season in last year. In 2015, the Magpies’ season is over. The Pies hosted Frankston Bombers on the home deck on Saturday and simply had to win to keep their season alive. Winless to this point, Frankston Bombers too had a bit to prove. The Bombers led at every change and deserved to get the four points, which they did with a 11.11 (77) to 10.13 (73) victory. Nathan Lonie returned for the Bombers and while not setting the world on fire, provided enormous and much needed experience to a young outfit. Zac Longham booted four goals after missing last week for personal rea-

sons and James Degenhardt was the best player on the ground. The Bombers haven’t been that far off the mark and deserved a win under new coach Beau Muston. Crib Point had their chances to steal the game, however, fell short in the big moments. Dean Karies and Lee Koerner were the best of the Pies. Both Bombers and Crib Point have one win for the season and in a tight, 16-round competition, will not take part of finals actions. Dromana stormed home with a seven goal to one last quarter on Saturday to beat Pearcedale by 24 points, 12.16 (88) to 10.4 (64). Pearcedale led by 16 points at three quarter time and booted the first goal of the final term to lead by a game high 21 points, before the Tigers kicked the final seven goals of the match. 16-yeard-old Sam Fowler was superb once again for the Tigers with six goals. It was a fitting result given it was Adam Hunter’s final game in the seniors. Hunter goes into hospital for surgery this week before again tackling the fight against cancer, which

Tight tussles: Dromana got up over Pearcedale by kicking seven in the final quarter, left, while Somerville held on to beat Sorrento, right. Pictures: Andrew Hurst

FRANKSTON VFL FOOTBALL CLUB ROUND 5 Sunday May 17 Vs Sandringham

ROUND 6 Sunday May 24 Vs Werribee Tigers

has re-emerged on his liver. The footy world is right behind Hunter. Pearcedale youngsters Lachy Marshall and Daniel Heijden were their best players. Hastings remains the only undefeated team in the competition and sits in second place on the ladder after beating Devon Meadows on Saturday. The Blues controlled the match for the majority of the contest with Luke Hewitt and Colin McVeigh booting four and three goals respectively. Beau Miller and Steven McInnes were the best of the Panthers while Kyle Beveridge booted a couple and was also solid over four quarters. In the final game, Josh Mold booted a career-high 10 goals for Red Hill in their 25.12 (162) to 4.6 (30) victory against Tyabb. Michael Chaplin also had a breakout game for the Hillmen with six goals and Josh Mold finished with five. Sean Holmes and Paul Wintle dominated. It was a tough day at the office for the Yabbies, although James Cottrell was a stand out.