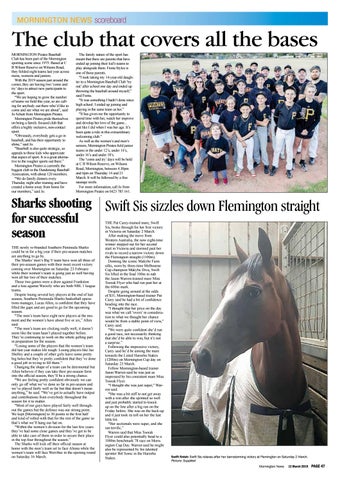 The club that covers all the bases MORNINGTON Pirates Baseball Club has been part of the Mornington sporting scene since 1975. Based at C B Wilson Reserve on Wilsons Road, they fielded eight teams last year across mens, womens and juniors. With the 2019 season just around the corner, they are having two ‘come and try’ days to attract new participants to the sport. “We are hoping to grow the number of teams we field this year, so are calling for anybody out there who’d like to come and see what we are about”, said Jo Schutt from Mornington Pirates. Mornington Pirates pride themselves on being a family focused club that offers a highly inclusive, non-contact sport. “Obviously, everybody gets a go in baseball, and has their opportunity to shine,” said Jo. “Baseball is also quite strategic, so appeals to those kids who appreciate that aspect of sport. It is a great alternative to the rougher sports out there.” Mornington Pirates is currently the biggest club in the Dandenong Baseball Association, with about 120 members. “We do family dinners every Thursday night after training and have created a home away from home for our members,” said Jo.

The family nature of the sport has meant that there are parents that have ended up joining their kid’s teams to play alongside them. Fiona Styles is one of those parents. “I took taking my 14-year-old daughter to a Mornington Baseball Club ‘try out’ after school one day and ended up throwing the baseball around myself,” said Fiona. “It was something I hadn’t done since high school. I ended up joining and playing in the same team as her.” “It has given me the opportunity to spend time with her, watch her improve and develop her love of the game... just like I did when I was her age. It’s been quite a ride in this extraordinary welcoming club.” As well as the women’s and men’s seniors, Mornington Pirates field junior teams in the under 12’s, under 14’s, under 16’s and under 18’s. The ‘come and try’ days will be held at C B Wilson Reserve, on Wilsons Road, Mornington, between 4.30pm and 6pm on Thursday 14 and 21 March. It will be followed by a free sausage sizzle. For more information, call Jo from Mornington Pirates on 0425 785 161.

Sharks shooting Swift Sis sizzles down Flemington straight for successful season THE newly re-branded Southern Peninsula Sharks could be in for a big year if their pre-season matches are anything to go by. The Sharks’ men’s Big V team have won all three of their pre-season games with their most recent victory coming over Mornington on Saturday 23 February while their women’s team is going just as well having won all bar two of their matches. Those two games were a draw against Frankston and a loss against Waverly who are both NBL 1 league teams. Despite losing several key players at the end of last season, Southern Peninsula Sharks basketball operations manager, Lucas Allen, is confident that they have filled the gaps and are good to go for the upcoming season. “The men’s team have eight new players at the moment and the women’s have about five or six,” Allen said. “The men’s team are clicking really well, it doesn’t seem like the team hasn’t played together before. They’re continuing to work on the whole gelling part in preparation for the season. “Losing some of the players that the women’s team did last year makes life tough. Losing players like Jaz Shelley and a couple of other girls leave some pretty big holes but they’re pretty confident that they’ve done a good job in trying to fill them.” Changing the shape of a team can be detrimental but Allen believes if they can take their pre-season form into the official season, they’ll be a strong chance. “We are feeling pretty confident obviously we can only go off what we’ve done so far in pre-season and we’ve played fairly well so far but that doesn’t mean anything,” he said. “We’ve got to actually have output and contributions from everybody throughout the season for it to matter. “Most of our guys have played fairly well throughout the games but the defence was our strong point. We kept [Mornington] to 30 points in the first half and kind of rolled with that for the rest of the game so that’s what we’ll hang our hat on. “Within the women’s division for the last few years they’ve had some close games and they’ve got to be able to take care of them in order to secure their place in the top four throughout the season.” The Sharks will kick off their official season at home with the men’s team set to face Altona while the women’s team will face Werribee in the opening round on Saturday 16 March.

THE Pat Carey-trained mare, Swift Sis, broke through for her first victory in Victoria on Saturday 2 March. After making the move from Western Australia, the now eight-time winner stepped out for her second start in Victoria and stormed past her rivals to record a narrow victory down the Flemington straight (1100m). Donning the iconic Makybe Farm silks, worn by three-time Melbourne Cup champion Makybe Diva, Swift Sis lifted in the final 100m to nab the Jason Warren-trained mare Miss Toorak Flyer who had run past her at the 600m mark. Despite going around at the odds of $31, Mornington-based trainer Pat Carey said he had a bit of confidence heading into the race. “I thought that her price on the day was what we call ‘overs’ in consideration to what we thought her chance would be from a stable point of view,” Carey said. “We were quite confident she’d run a good race, not necessarily thinking that she’d be able to win, but it’s not a surprise.” Following the impressive victory, Carey said he’d be aiming the mare towards the Listed Hareeba Stakes (1200m) on Mornington Cup day on Saturday 23 March. Fellow Mornington-based trainer Jason Warren said he was just as impressed by his consistent mare Miss Toorak Flyer. “I thought she was just super,” Warren said. “She was a bit stiff to not get away with a win after she sprinted so well and just probably started to knock up on the line after a big run on the Friday before. She was on the back-up and it just took its toll on her the last little bit. “Her sectionals were super, and she ran terrific.” Warren said that Miss Toorak Flyer could also potentially head to a 1000m benchmark 78 race on Mornington Cup Day. Warren said he might also be represented by his talented sprinter Bel Sonic in the Hareeba Stakes.