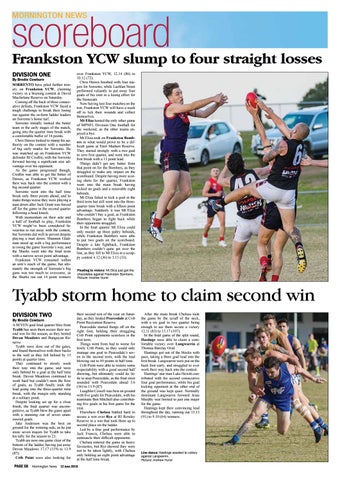 By Brodie Cowburn SORRENTO have piled further misery on Frankston YCW, claiming victory in a bruising contest at David Macfarlane Reserve on Saturday. Coming off the back of three consecutive defeats, Frankston YCW faced a tough challenge to break their losing run against the in-form ladder leaders on Sorrento’s home turf. Sorrento initially looked the better team in the early stages of the match, going into the quarter time break with a comfortable buffer of 14 points. Chris Dawes looked to stamp his authority on the contest with a number of big early marks for Sorrento. He was matched up on Frankston YCW defender BJ Credlin, with the Sorrento forward having a significant size advantage over his opponent. As the game progressed though, Credlin was able to get the better of Dawes, as Frankston YCW worked their way back into the contest with a big second quarter. Sorrento went into the half time break only three points ahead, and to make things worse they were playing a man down after Jack Grant was forced off for the game in the second quarter following a head knock. With momentum on their side and a half of football to play, Frankston YCW might’ve been considered favourites to run away with the contest, but Sorrento did well to persist despite playing a man down. Shannon Gladman stood up with a big performance to swing the game Sorrento’s way, and the Sharks went into the final term with a narrow seven point advantage. Frankston YCW remained within an arm’s reach of the game, but ultimately the strength of Sorrento’s big guns was too much to overcome, as the Sharks ran out 14 point winners

over Frankston YCW, 12.14 (86) to 10.12 (72). Chris Dawes finished with four majors for Sorrento, while Lachlan Street performed valiantly to put away four goals of his own in a losing effort for the Stonecats. Now having lost four matches on the trot, Frankston YCW will have a week off to lick their wounds and collect themselves. Mt Eliza hosted the only other game of MPNFL Division One football for the weekend, as the other teams enjoyed a bye. Mt Eliza took on Frankston Bombers in what would prove to be a difficult game at Emil Madsen Reserve. They started strongly with a two goal to zero first quarter, and went into the first break with a 13 point lead. Things didn’t get any better from that point on for the Bombers, as they struggled to make any impact on the scoreboard. Despite having more scoring shots for the quarter, Frankston went into the main break having kicked no goals and a miserable eight behinds. Mt Eliza failed to kick a goal in the third term but still went into the threequarter time break with a fifteen point advantage. Suddenly it was Mt Eliza who couldn’t buy a goal, as Frankston Bombers began to fight back while their opponents struggled. In the final quarter Mt Eliza could only muster up three paltry behinds, while Frankston Bombers were able to put two goals on the scoreboard. Despite a late fightback, Frankston Bombers couldn’t quite get over the line, as they fell to Mt Eliza in a scrappy contest 4.12 (36) to 3.15 (33). Floating to victory: Mt Eliza just got the chocolates against Frankston Bombers. Picture: Andrew Hurst

By Brodie Cowburn A SEVEN goal final quarter blitz from Tyabb has seen them secure their second win for the season, as they bested Devon Meadows and Bunguyan Reserve. Tyabb were slow out of the gates, and found themselves with their backs to the wall as they fell behind by 15 points at quarter time. They continued to slowly work their way into the game, and were only behind by a goal at the half time break. Devon Meadows continued to work hard but couldn’t stem the flow of goals, as Tyabb finally took the lead going into the three-quarter time break, with the margin only standing at a solitary point. Despite looking set up for a close finish, the final quarter was uncompetitive, as Tyabb blew the game apart with a stunning run of seven unanswered goals. Jake Anderson was the best on ground for the winning side, as he put away seven majors for Tyabb to take his tally for the season to 23. Tyabb are now one game clear of the bottom of the ladder, having put away Devon Meadows 17.17 (119) to 13.9 (87). Crib Point were also looking for

their second win of the year on Saturday, as they hosted Pearcedale at Crib Point Recreation Reserve. Pearcedale started things off on the right foot, holding their struggling Crib Point opponents scoreless in the first term. Things went from bad to worse for lowly Crib Point, as they could only manage one goal to Pearcedale’s seven in the second term, with the lead blowing out to 49 points in half time. Crib Point were able to restore some respectability with a good second half showing, but ultimately could do little to stop Pearcedale, as the final siren sounded with Pearcedale ahead 5.6 (36) to 13.9 (87) Laughlin Cowell was best on ground with five goals for Pearcedale, with his teammate Ben Mitchell also contributing five goals in his first game for the year. Elsewhere Chelsea battled hard to secure a win over Rye at RJ Rowley Reserve in a win that took them up to second place on the ladder. Led by a four goal performance by Jack Francis, Chelsea were able to outmuscle their difficult opponents. Chelsea entered the game as heavy favourites, but Rye showed they were not to be taken lightly, with Chelsea only holding an eight point advantage at the half time break.

After the main break Chelsea took the game by the scruff of the neck, with a six goal to two quarter being enough to see them secure a victory 12.11 (83) to 15.17 (107). In the final game of the split round, Hastings were able to claim a comfortable victory over Langwarrin at Thomas Barclay Oval. Hastings got out of the blocks with pace, taking a three goal lead into the first break. Langwarrin were put on the back foot early, and struggled to ever work their way back into the contest. Hastings’ star man Luke Hewitt contributed with his second consecutive four goal performance, while his goal kicking opponent at the other end of the ground was kept quiet. Normally dominant Langwarrin forward Jesse Murphy was limited to just one major for the game. Hastings kept their convincing lead throughout the day, running out 13.13 (91) to 9.10 (64) winners.