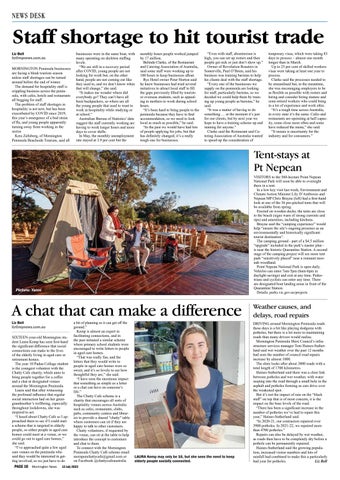 Staff shortage to hit tourist trade Liz Bell liz@mpnews.com.au MORNINGTON Peninsula businesses are facing a bleak tourism season unless staff shortages can be turned around before the end of winter. The demand for hospitality staff is crippling business across the peninsula, with cafes, hotels and restaurants all begging for staff. The problem of staff shortages in hospitality is not new, but has been exacerbated by COVID since 2019, this year’s emergence of a bad strain of flu, and young people apparently turning away from working in the sector. Kera Zaltsberg, of Mornington Peninsula Beachside Tourism, said all

businesses were in the same boat, with many operating on skeleton staffing levels. “We are still in a recovery period after COVID, young people are not looking for work but, on the other hand, people are not coming out like they used to, and we don’t know when that will change,” she said. “It makes me wonder where did everybody go? They can’t have all been backpackers, so where are all the young people that used to want to work in hospitality while studying or at school.” Australian Bureau of Statistics’ data suggest the staff currently working are having to work longer hours and more days to cover shifts. In May, the monthly unemployment rate stayed at 3.9 per cent but the

monthly hours people worked jumped by 17 million. Belinda Clarke, of the Restaurant and Catering Association of Australia, said some staff were working up to 100 hours to keep businesses afloat. Rye Hotel owner Peter Horton said he knew businesses had tried several initiatives to attract local staff to fill the gaps previously filled by tourists or overseas students, such as appealing to mothers to work during school hours. “It’s been hard to bring people to the peninsula because they have to find accommodation, so we need to look local as much as possible,” he said. “In the past we would have had lots of people applying for jobs, but that has definitely changed; it’s a really tough one for businesses.

“Even with staff, absenteeism is high, you can set up rosters and then people get sick or just don’t show up.” Owner of Revolution Roasters in Somerville, Paul O’Brien, said his business was training baristas to help his clients deal with the staff shortage. “Every one of the businesses we supply on the peninsula are looking for staff, particularly baristas, so we decided we could help them by training up young people as baristas,” he said. “It was a matter of having to do something … at the moment it’s just for our clients, but by next year we hope to have a training scheme up and running for anyone.” Clarke said the Restaurant and Catering Association of Australia wanted to speed-up the consideration of

temporary visas, which were taking 83 days to process – almost one month longer than in March. Up to 25 per cent of skilled workers visas were taking at least one year to process. Clarke said the processes needed to be streamlined but, in the meantime, she was encouraging employers to be as flexible as possible with rosters and hiring and consider hiring mature and semi-retired workers who could bring in a lot of experience and work ethic. “It’s a tough time across Australia, in every state it’s the same. Cafes and restaurants are operating at half capacity, some close more often and some have reduced the menu,” she said. “It means is uncertainty for the industry and for consumers.”

Tent-stays at Pt Nepean VISITORS to the 560-hectare Point Nepean National Park will soon be able to overnight there in a tent. In a low key visit last week, Environment and Climate Action Minister Lily D’Ambrosio and Nepean MP Chris Brayne (left) had a first-hand look at one of the 36 pre-pitched tents that will be available from spring. Erected on wooden decks, the tents are close to the beach (signs warn of strong currents and rips) and amenities, including kitchens. Brayne said the “camping experience” would help “ensure the site’s ongoing presence as an environmentally and historically significant tourist destination”. The camping ground - part of a $4.5 million “upgrade” included in the park’s master plan is near the historic Quarantine Station. A second stage of the camping project will see more tent pads “sensitively placed” near a remnant moonah woodland. Point Nepean National Park is open daily. Vehicles can enter 7am-5pm (6am-6pm in daylight savings) and exit at any time. Pedestrians and cyclists can enter any time. There are designated boat landing areas in front of the Quarantine Station. Details: parks.vic.gov.au/projects

A chat that can make a difference Liz Bell liz@mpnews.com.au SIXTEEN-year-old Mornington student Laura Kemp has seen first-hand the significant difference that social connections can make to the lives of the elderly living in aged care or retirement homes. The year 10 Padua College student is the youngest volunteer with the Chatty Cafe charity, which aims to bring people together for a coffee and a chat at designated venues around the Mornington Peninsula. Laura said that after witnessing the profound influence that regular social interaction had on her greatgrandmother’s wellbeing, especially throughout lockdowns, she was inspired to act. “I heard about Chatty Cafe so I approached them to see if I could start a scheme that is targeted to elderly people, so either people in aged care homes could meet at a venue, or we could go out to aged care homes,” she said. “I’ve approached quite a few aged care venues on the peninsula who said they would be interested in getting involved, so we just have to do

a bit of planning so it can get off the ground.” Kemp is almost an expert in facilitating connections, and in the past initiated a similar scheme where primary school students were encouraged to write letters to people in aged care homes. “That was really fun, and the letters that they would write to people in aged care homes were so sweet, and it’s so lovely to see how thoughtful they are,” she said. “I have seen the enormous impact that something as simple as a letter or a chat can have on someone’s life.” The Chatty Cafe scheme is a charity that encourages all sorts of hospitality venues across Australia such as cafes, restaurants, clubs, pubs, community centres and libraries to provide a shared “chatty” table where customers can sit if they are happy to talk to other customers. Chatty volunteers, if requested by the venue, can sit at the table to help introduce the concept to customers and chat to them. To connect with the Mornington Peninsula Chatty Café scheme email mornpenchattycafe@gmail.com or on Facebook @chattycafeaustralia

LAURA Kemp may only be 16, but she sees the need to keep elderly people socially connected.

Weather causes, and delays, road repairs DRIVING around Mornington Peninsula roads these days is a bit like playing dodgems with potholes, but there is a lot more to maintaining roads than many drivers would realise. Mornington Peninsula Shire Council’s infrastructure services manager Tom Haines-Sutherland said wet weather over the past 12 months had seen the number of council road repairs increase by almost 1000. The shire looks after about 3800 roads with a total length of 1700 kilometres. Haines-Sutherland said there was a clear link between potholes and wet weather, with water seeping into the road through a small hole in the asphalt and potholes forming as cars drive over the weakened spot. But it’s not the impact of rain on the “black stuff” on top that is of most concern, it is the impact on the base levels of the road. “There has been a significant increase in the number of potholes we’ve had to repair this year,” Haines-Sutherland said. “In 2020-21, our contractors repaired over 3900 potholes. In 2021-22, we repaired more than 4700 potholes.” Repairs can also be delayed by wet weather, as roads then have to be completely dry before a pothole can be permanently repaired. Haines-Sutherland said the growing population, increased visitor numbers and lots of rainfall had combined to make this a particularly bad year for potholes. Liz Bell