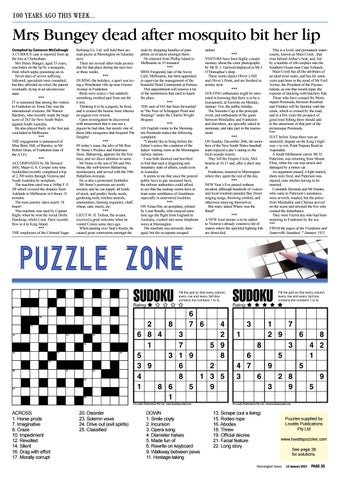 Mrs Bungey dead after mosquito bit her lip Compiled by Cameron McCullough A CURIOUS case is reported from up the line at Cheltenham. Mrs Henry Bungey, aged 33 years, was bitten on the lip by a mosquito, from which septic poisoning set in. Seven days of severe suffering followed; specialists were consulted, but they afforded no relief, the patient eventually dying in an unconscious state. *** IT is rumoured that among the visitors to Frankston on Xmas Day was the international cricketer, Mr Warren Bardsley, who recently made the huge score of 265 for New South Wales against South Australia. He also played finely in the Test just concluded at Melbourne. *** THE engagement is announced of Miss Betty Hill, of Burnley, to Mr Robert Dean, of Frankston (late of the A.I.F). *** ACCOMPANIED by Mr Howard Jolly, Major G.A. Cowper (one time Seafordite) recently completed a trip of 2,700 miles through Victoria and South Australia by aeroplane. The machine used was a 160hp F. E. 2B which covered the distance from Adelaide to Melbourne in 6 hours 15 minutes. The train journey takes nearly 18 hours! This machine was used by Captain Rigby when he won the Aerial Derby Handicap, whilst Lieut. Parer recently flew in it to King Island. *** THE employees of the Colonial Sugar

Refining Co. Ltd. will hold their annual picnic at Mornington on Saturday next. There are several other trade picnics due for that place during the next two or three weeks. *** DURING the holidays, a sport was trying a Winchester rifle up near Gweno Avenue in Frankston. Birds were scarce – but suddenly something swished past from out the ti tree. Thinking it to be a pigeon, he fired, and it crossed the bourne from whence no pigeon ever returns. Upon investigation he discovered with amazement that it was not a pigeon he had shot, but merely one of those little mosquitos that frequent The Heights! *** IN today’s issue, the advt of Mr Ron W. Stone’s Produce and Hardware Store, Balnarring, appears for the first time, and we direct attention to same. Mr Stone is the son of Mr and Mrs Stone, the well-known Balnarring storekeepers, and served with the 39th Battallion overseas. He is also a prominent footballer. Mr Stone’s premises are newly erected, and he can supply all kinds of stock, and poultry foods, seeds, gardening tools, kitchen utensils, ammunition, farming requisites, chaff, wheat, oats, maize, etc. *** LIEUT W. H. Treloar, the aviator, received a great welcome when he visited Cowes some days ago. When passing over Seal’s Rocks, he caused great commotion amongst the

seals by dropping bundles of pamphlets on aviation amongst them. He returned from Phillip Island to Melbourne in 35 minutes! *** MISS Fitzgerald, late of the Savoy Café, Melbourne, has been appointed to supervise the management of the beautiful Hotel Continental at Portsea. This appointment will remove a lot of the sombreness that used to haunt the place. *** THE sum of £65 has been forwarded to “the Poor of Schnapper Point and Hastings” under the Charles Wright Bequest. *** AN English visitor to the Mornington Peninsula makes the following complaint: “I should like to bring before the Editor’s notice the condition of the ladies’ waiting room at the Mornington railway station. I was both shocked and horrified to find that such a disgusting and insanitary state of affairs, could exist in Australia. It seems to me that since the general public have to pay increased fares, the railway authorities could afford to see that the waiting rooms have at least some semblance of cleanliness especially in unsewered localities. *** ON Xmas Day an aeroplane, piloted by Lieut Rendle, who essayed some time ago the flight from England to Australia, crashed into some telephone wires at Mornington. The machine was seriously damaged, but the occupants escaped

*** VISITORS have been highly complimentary about the color photography by Mr H. J. Garrood displayed at Mr J. O’Donoghue’s shop. These works depict Oliver’s Hill and Oliver’s Point, and are finished in artistic style. *** GOLFING enthusiasts might be interested in knowing that there is to be a tournament, at Sorrento on Monday, January 31st, the public holiday. The Sorrento Cup is the principal event, and enthusiasts of the game between Mordialloc and Frankston and elsewhere, are specially asked to nominate, and take part in the tournament. *** ON Sunday, December 26th, the members of the New South Wales baseball team enjoyed a day’s outing to the local seaside resorts. They left the Empire Circle, Melbourne at 10.15 and, after a short stay at Frankston, motored to Mornington where they spent the rest of the day. *** NEW Year’s Eve passed without incident, although hundreds of visitors and local residents paraded Bay Street singing songs, throwing confetti, and otherwise enjoying themselves. But many asked Where was the Band? *** A NEW trout stream is to be added to Victoria’s already extensive list of waters where the speckled fighting fish are domiciled.

This is a lively and permanent watercourse, known as Main Creek , that rises behind Arthur’s Seat, and, fed by a number of rills empties into the Southern Ocean near Cape Schanck. Main Creek has all the attributes of an ideal trout water, and has for some years past been in the mind of Mr Fred Archer, the President of the Piscatorialists, as one that would repay the expense of stocking with hatchery fish. Those who have crossed the Mornington Peninsula, between Rosebud and Flinders will be familiar with the creek, which is crossed by the road, and in a few years the prospect of good trout fishing there should add to the attractions of that part of the picturesque Peninsula. *** JUST before Xmas there was an unseemly dispute on the King’s highway – to wit, Point Nepean Road at Aspendale. A South Melbourne carrier Mr H. Patterson, was returning from Mount Eliza, when his van was struck and damaged by a motor car. An argument ensued, a fight started, shots were fired, and Patterson was injured, nine stitches having to be inserted. Constable Brennan and Mr Hunter, who came to Patterson’s assistance, were severely mauled, but the police from Mordialloc and Chelsea arrived on the scene and arrested the five who created the disturbance. They were Fitzroyites who had been motoring to Frankston by the sea. *** FROM the pages of the Frankston and Somerville Standard, 7 January 1921