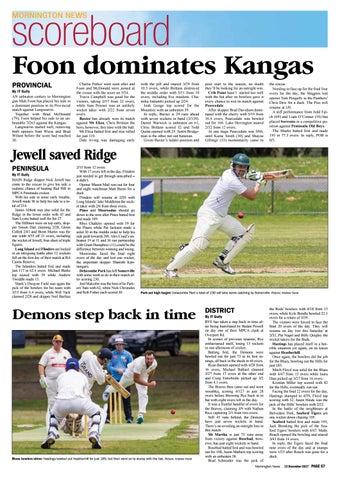 By IT Gully AN unbeaten century to Mornington gun Matt Foon has placed his side in a dominant position in its Provincial match against Langwarrin. Together with Brad McDonald (79), Foon helped his side to an unbeatable 7/263 against the Kangas. Langwarrin started well, removing both openers Sam Wiese and Brad Wilson before the score had reached 30.

Charlie Parker went soon after and Foon and McDonald were joined at the crease with the score on 3/54. Travis Campbell was good for the visitors, taking 2/57 from 22 overs, while Sam Prosser was an unlikely wicket taker with 2/22 from seven overs. Baxter has already won its match against Mt Eliza, Chris Brittain the hero, however, this time with the ball. Mt Eliza batted first and was rolled for just 110. Dale Irving was damaging early

with the pill and snared 3/29 from 10.5 overs, while Brittain destroyed the middle order with 5/11 from 10 overs, including five maidens. Chamika Sattambi picked up 2/24. Josh Gouge top scored for the Mounties with an unbeaten 39. In reply, Baxter is 29 runs ahead with seven wickets in hand (3/139). Daniel Warwick is unbeaten on 61, Chris Brittain scored 32 and Todd Quinn opened with 25. Justin Bridgeman is the other not out batsman. Given Baxter’s ladder position and

poor start to the season, no doubt they’ll be looking for an outright win. Crib Point hasn’t started too well with the bat after its bowlers gave it every chance to win its match against Pearcedale. After skipper Brad Davidson dominated with the cherry with 5/19 from 16.4 overs, Pearcedale was bowled out for 160. Luke Herrington snared 2/32 from 12 overs. At one stage Pearcedale was 5/60, until Kaine Smith (30) and Shayne Gillings (33) momentarily came to

the rescue. Needing to face up for the final four overs for the day, the Magpies lost opener Tom Pengelly to the Panthers’ Chris Dew for a duck. The Pies will resume at 1/0. A stiff performance from Jedd Falck (69) and Liam O’Conner (54) has placed Sorrento in a competitive position against Peninsula Old Boys. The Sharks batted first and made 193 in 77.3 overs. In reply, POB is 0/5.

By IT Gully MAIN Ridge skipper Nick Jewell has come to the rescue to give his side a realistic chance of beating Red Hill in MPCA Peninsula cricket. With his side in some early trouble, Jewell made 96 to help his side to a total of 214. James Abbott was also solid for the Ridge in the lower order with 45 and Sam Lyons batted well for his 27. The Hillmen were on top early, skipper Simon Dart claiming 2/28, Glenn Collett 2/41 and Brent Martin was the star witth 4/55 off 21 overs, including the wicket of Jewell, four short of triple figures. Long Island and Flinders are locked in an intriguing battle after 12 wickets fell on the first day of their match at BA Cairns Reserve. The Islanders batted first and made just 117 in 62.4 overs. Michael Burke top scored with 39 while Andrew Tweddle made 15. Shark’s Dwayne Field was again the pick of the bowlers for his team with 3/15 from 6.4 overs, while Will Tuck claimed 2/28 and skipper Neil Barfuss

2/15 from 12 overs. With 17 overs left in the day, Flinders just needed to get through unscathed – it didn’t. Opener Mason Mail was out for four and night watchman Matt Burns for a duck. Flinders will resume at 2/20 with Long Islands’ Jake Middleton the wicket taker with 2/6 from three overs. Pines and Moorooduc should go down to the wire after Pines batted first and made 189. Rhys Chalkley opened with 59 for the Piners while Pat Jackson made a solid 30 in the middle order to help his side push towards 200. Alex Coad’s unbeaten 19 at 11 and 36 run partnership with Grant Humphrey (11) could be the difference between winning and losing. Moorooduc faced the final eight overs of the day and lost one wicket, the important skipper Shamith Kannangara. Delacombe Park has left Somerville with some work to do in their match after scoring 230. Joel Malcolm was the best of he Parkers’ bats with 62, while Nick Christides and Rob Fisher each scored 30.

Demons step back in time

Blues bowlers shine: Hastings bowled out Heatherhill for just 185, but then went on to slump with the bat. Picture: Andrew Hurst

By IT Gully RYE has taken a step back in time after being humiliated by Baden Powell on day one of their MPCA clash at Overport Rd. In scenes of previous seasons, Rye embarrassed itself, losing 13 wickets in one afternoon of cricket. Batting first, the Demons were bowled out for just 73 in its first innings, all back in the sheds in 44 overs. Ryan Barnett opened with 4/28 from 16 overs, Michael Ballard claimed 3/27 from 17 overs at the other end and Craig Entwhistle picked up 3/2 from 4.1 overs. The Braves then came out and went wooshka, scoring 4/127 in just 28 overs before throwing Rye back in to bat with eight overs left in the day. It was a fruitful handful of overs for the Braves, claiming 3/9 with Nathan Rice capturing 2/1 from two overs. Still 45 runs behind, the Demons have just seven wickets in hand. There’s no avoiding an outright loss in this match. Mt Martha is just 75 runs away from victory against Rosebud, however, has just eight wickets in hand. Rosebud batted first and was bowled out for 108, Jason Mathers top scoring with an unbeaten 38. Brad Schreuder was the pick of

the Reds’ bowlers with 4/18 from 15 overs, while Kyle Bendle bowled 22.1 overs for a return of 3/39. The visitors were forced to face the final 20 overs of the day. They will resume on day two this Saturday at 2/32, Pat Nagel and Billy Quigley the wicket takers for the Buds. Hastings has placed itself in a horrible situation yet again, on its knees against Heatherhill. Once again, the bowlers did the job for the Blues, bowling out the Hills for just 185. Mitch Floyd was solid for the Blues with 4/47 from 15 overs while Isuru Dias picked up 3/27 from 16 overs. Kristian Miller top scored with 82 for the Hills, eventually run out. Facing the final 22 overs for the day, Hastings slumped to 4/59, Floyd top scoring with 32. Jason Hinde was the pick of the Hills’ bowlers with 2/22. In the battle of the neighbours at Belvedere Park, Seaford Tigers are one wicket down chasing 195. Seaford batted first and made 195, Jack Brooking the pick of the Seaford Tigers’ bowlers with 4/47. Matty Roach opened the bowling and snared 3/43 from 14 overs. In reply, the Tigers faced the final nine overs of the day and at stumps were 1/23 after Roach was gone for a duck.