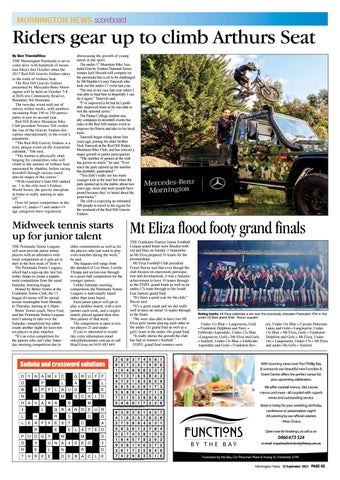 Riders gear up to climb Arthurs Seat By Ben Triandafillou THE Mornington Peninsula is set to come alive with hundreds of mountain bikers this October when the 2017 Red Hill Gravity Enduro takes to the trails of Arthurs Seat. The Red Hill Gravity Enduro presented by Mercedes-Benz Mornington will be held on October 7-8 at Hillview Community Reserve, Boundary Rd Dromana. The two-day event sold out of entries within weeks, with numbers increasing from 190 to 250 participants in just its second year. Red Hill Riders Mountain Bike Club president Terence Toh credits the rise of the Gravity Enduro discipline internationally to the event’s popularity. “The Red Hill Gravity Enduro is a truly unique event on the Australian calendar,” Toh said. “The format is physically challenging for competitors who will climb to the summit of Arthurs Seat unassisted by shuttles, before racing downhill through various timed special stages of the course.” “With Australia’s Sam Hill ranked no. 1 in the elite men’s Enduro World Series, the gravity discipline at home is really starting to take off.” Over 66 junior competitors in the under-15, under-17 and under-19 age categories have registered,

showcasing the growth of young talent in the sport. The under-17 Mountain Bike Australia Gravity Enduro National Series winner Jack Hewish will compete on the peninsula but is set to be challenged by Mt Martha’s Louis Tancredi who took out the under-17 event last year. “He was in my race last year where I was able to beat him so hopefully I can do it again,” Tancredi said. “I’ve improved a bit but he’s probably improved more as he was able to win the national series.” The Padua College student usually competes in downhill events but rides in the Red Hill enduro event to improve his fitness and take to his local track. Tancredi began riding about four years ago, joining his older brother Nick Tancredi at the Red Hill Riders Mountain Bike Club, and has noticed a major growth in junior participation. “The number of juniors at the club has grown so much,” he said. “Ever since the park opened up the number has probably quadrupled.” “You didn’t really see too many younger kids at the start but when the park opened up to the public about two years ago, more and more people have joined because they’ve heard about the great tracks.” The club is expecting an estimated 500 people to travel to the region for the weekend of the Red Hill Gravity Enduro.

other commitments as well as for the players who just want to play extra matches during the week,” he said. The leagues will range from the standard of Les Moss, Loretta Thrupp and section one through to a green ball competition for the younger juniors. Unlike Saturday morning competition, the Peninsula Tennis Leagues is individually based rather than team based. Each junior player will get to play a doubles match, with a new partner each week, and a singles match, played against their doubles partner of that week. The competition is open to tennis players 21 and under. If you’re interested or would like extra information email info@bettertennis.com.au or call Brad Grose on 0410 483 669.

Mt Eliza flood footy grand finals THE Frankston District Junior Football League grand finals were flooded with red and blue on Sunday 3 September as Mt Eliza prepared 10 teams for the premierships. Mt Eliza Football Club president Fraser Bayne said that even though the club focuses on enjoyment, participation and development, it was a fantastic achievement to have 10 teams through to the FDJFL grand finals as well as an under-17s team through to the South East Juniors grand final. “It’s been a good year for the club,” Bayne said. “It’s a great result and we did really well to have an initial 16 teams through to the finals. “We were also able to have two Mt Eliza girls’ teams playing each other in the under-15s grand final as well as a girls’ team in the under-18s grand final. “It really shows the growth the club has had in women’s football.” FDJFL grand final winners were: