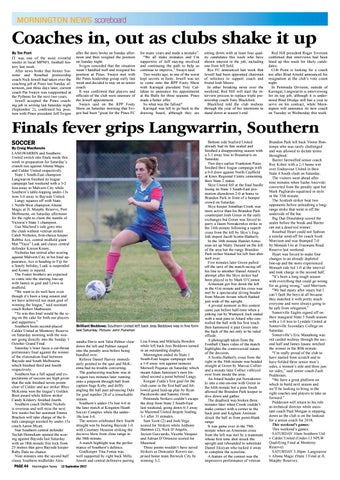 Coaches in, out as clubs shake it up By Toe Punt IT was one of the most eventful weeks in local MPNFL football history last week. After news broke that former Sorrento and Rosebud premiership coach Nick Jewell had taken over the coaching job at Pines last Sunday afternoon, just three days later, current coach Pat Swayn was reappointed at the Pythons for the next two years. Jewell accepted the Pines coaching job in writing last Saturday night (September 2), confirmed his position with Pines president Jeff Svigos

after the story broke on Sunday afternoon and then resigned the position on Sunday night. Svigos conceded that the situation wasn’t handled well and resigned his position at Pines. Swayn met with the Pines leadership group early last week and decided to stay on as senior coach. It was confirmed that players and officials of the club were unaware of the Jewell appointment. Swayn said on the RPP Footy Show on Saturday morning that Svigos had been “great for the Pines FC

for many years and made a mistake”. “We all make mistakes and I’m supportive of Jeff staying involved and continuing the path to help us continue to improve,” Swayn said. Two weeks ago, in one of the worst kept secrets in footy, Jewell was set to come onto the RPP Footy Show with Karingal president Troy Callahan to announce his appointment at the Bulls for three seasons. Pines made a better offer. So what was the fallout? Karingal was left to go back to the drawing board, although they are

sitting down with at least four quality candidates this week who have shown interest in the job, including one from left field. Rye FC announced last week that Jewell had been appointed chairman of selectors to support coach and friend Josh Moore. In other breaking news over the weekend, Red Hill will start the interview process to replace triple premiership coach Tony Blackford. Blackford told the club midway through the year of his intentions to stand down at season’s end.

Red Hill president Roger Siverson confirmed that interviews had been lined up this week for likely candidates. Crib Point is looking for a coach too after Brad Arnold announced his resignation at the club’s vote count night. In Peninsula Division, outside of Karingal, Langwarrin is interviewing for its top job, although it is understood Brad Dredge still has a year to serve on his contract, while Mornington will announce its new coach on Tuesday or Wednesday this week.

By Craig MacKenzie LANGWARRIN and Southern United switch into finals mode this week in preparation for Saturday’s crunch ties against Altona Magic and Calder United respectively. State 1 South-East champion Langwarrin finished its league campaign last weekend with a 3-2 loss away to Malvern City while Southern’s table-topping under-13s won 3-0 away to Bayside United. Langy squares off with State 1 North-West champion Altona Magic at JL Murphy Reserve, Port Melbourne, on Saturday afternoon for the right to claim the mantle of Victoria’s State 1 champion. Gus Macleod’s side goes into the clash without veteran striker Caleb Nicholes, first-choice keeper Robbie Acs, central midfield giant Mat “Yaya” Luak and classy central defender Kieron Kenny. Nicholes has retired after scoring against Malvern City in his final appearance, Acs is heading to Fiji for a family holiday, Luak is suspended and Kenny is injured. The Foster brothers are expected to come into the starting line-up with James in goal and Lewis in midfield. “We want to do well here even though it’s been a long season and we have achieved our main goal of winning the league,” said assistant coach Robert Mathieson. “To win this final would be the icing on the cake for both our players and supporters.” Southern hosts second-placed Calder United at Monterey Reserve on Saturday morning with the winner going directly into the Sunday 1 October Grand Final. Saturday’s loser faces a cut-throat preliminary final against the winner of the elimination final between Bayside and South Melbourne which finished third and fourth respectively. Southern has a full squad and expectations of success are high given that the side finished seven points clear of Calder and ace striker Rhys McKenna won the league’s Golden Boot award while fellow striker Candy Kilderry finished fourth. Southern coach Debbie Nichols is overseas and will miss the next few weeks but her assistant Emma Bracken will take charge of the finals campaign assisted by under-15s coach Aaron Myatt. Star Southern central defender Taylah Hennekam opened the scoring against Bayside last Saturday with an 18th minute free kick from 25 metres that gave Bayside keeper Ruby Dale no chance. Nine minutes into the second half classy Southern midfielder Ales-

Brilliant Beddows: Southern United left back Jess Beddows was in fine form last Saturday. Picture: John Punshon sandra Davis sent Talia Palmer clear down the left and Palmer surged into the penalty area before being bundled over. Referee Daniel Harvey immediately pointed to the spot and McKenna had no trouble converting. The goalscoring machine was at it again two minutes later running onto a pinpoint through ball from captain Sage Kirby and deftly angling the ball past advancing Dale for goal number 28 of a remarkable season. Southern’s under-15s lost 4-0 in the later match at Kingston Heath Soccer Complex while the under18s lost 3-0. The seniors celebrated their fourth straight win by beating Bayside 1-0 with Courtney Heuston striking the decisive blow from close range in the 38th minute. A match highlight was the performance of Southern’s defence. Goalkeeper Tina Fonua was well supported by right back Milla Jowett and central defensive pairing

Bottom side Seaford United already had its fate sealed and finished a disappointing season with a 5-1 away loss to Beaumaris on Saturday. Two days earlier Frankston Pines finished their league campaign with a 0-0 draw against North Caulfield at Knox Regional Centre cementing their State 2 status. Skye United fell at the final hurdle losing its State 3 South-East promotion showdown 2-0 at home to Brandon Park in front of a bumper crowd on Saturday. Skye keeper Jonathan Crook was more active than his Brandon Park counterpart Josh Green in the early exchanges but Green was forced to parry a Jason Nowakowksi strike in the 14th minute following a superb cross from the left by Skye’s English import Jacob Scotte-Hatherly. In the 34th minute Hamlet Armenian set up Matty Durand on the left of the area but the rangy Brandon Park striker blasted his left foot shot well over. Five minutes later Green pulled off the save of the match racing off his line to smother Daniel Attard’s attempt after the Skye striker had been played in by Mark O’Connor. Armenian got free down the left in the 41st minute and his cross was met by a spectacular diving header from Maxim Avram which flashed just wide of the upright. A pivotal moment in this contest came just before half-time when a jinking run by Wumjock Jock ended with a neat pass to Attard who controlled the ball with his first touch then hammered it past Green into the back of the net only to be ruled offside. A photograph taken from the Football Chaos video of the match highlights the controversial nature of the decision. A Scotte-Hatherly cross from the right in the 56th minute was headed straight at Green by Marcus Collier and a minute later Collier volleyed over from inside the area. An Attard header put Nowakowski into a one-on-one with Green in the 64th minute but a poor finish allowed the Brandon Park keeper to dive down and gather. The deadlock was broken three minutes later when Crook couldn’t make contact with a corner to the back post and Kegham Aminian struck the ball in from point-blank range. It was game over in the 79th minute when an Armenian cross from the left was met by a teammate whose first time shot struck the upright and rebounded to substitute Daniel Eksiyan who tucked it away to complete the scoreline. A feature of the contest was the impressive performance of veteran

Brandon Park left back Vinnie Bontemps who was rarely challenged and was allowed to dictate terms throughout. Baxter farewelled senior coach Roy Kilner with a 2-1 home win over Endeavour United in their State 4 South clash on Saturday. The visitors went ahead after nine minutes when Sasho Ancevski converted from the penalty spot but Mark Pagliarulo equalised in style in the 35th minute. The Scottish striker beat two opponents before unleashing a longrange strike that went in off the underside of the bar. Big Dan Disseldorp scored the sealer before the break and Baxter ran out a deserved winner. Rosebud Heart could not fashion a similar send-off for coach Scott Morrison and was thumped 7-0 by Monash Uni at Truemans Road Reserve last weekend. Heart was forced to make four changes to an already depleted line-up and the more experienced Monash side led 1-0 at the interval and took charge in the second half. “It’s been a long tough season with everything that could go wrong for us going wrong,” said Morrison. “We had injury after injury but I can’t fault the boys at all because they matched it with pretty much everyone and were always going to be safe from relegation.” Somerville Eagles signed off on their inaugural State 5 South season with a 1-0 loss to Lyndale United at Somerville Secondary College on Saturday. Somerville’s Eric Manahong was red carded midway through the second half and James Iasanc notched the winner in the 80th minute. “I’m really proud of the club to have started from scratch and to have fielded three senior men’s sides, a women’s side and three junior sides,” said senior coach Zach Peddersen. “We have a great platform on which to build next season and we’ll be looking to bring in the right coaches and players to take us forward.” Peddersen will return to his role as technical director while assistant coach Paul Morgan is stepping down so the club is on the lookout for a senior coach for 2018. This weekend’s games: This weekend’s games: SATURDAY 10am Southern Utd v Calder United (Under-13 NPLW Qualifying Final at Monterey Reserve). SATURDAY 3.30pm: Langwarrin v Altona Magic (State 1 Final at JL Murphy Reserve).