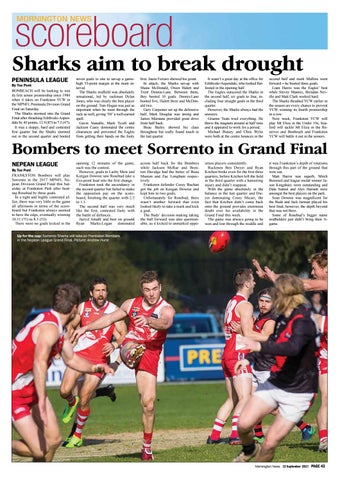 By Toe Punt BONBEACH will be looking to win its first senior premiership since 1984 when it takes on Frankston YCW in the MPNFL Peninsula Division Grand Final on Saturday. The Sharks stormed into the Grand Final after thrashing Edithvale-Aspendale by 40 points, 13.9 (87) to 7.5 (47). It was a sloppy, hard and contested first quarter but the Sharks stormed out in the second quarter and booted

seven goals to one to set-up a gamehigh 53-point margin at the main interval. The Sharks midfield was absolutely sensational, led by ruckman Dylan Jones, who was clearly the best player on the ground. Tom Hogan was just as important when he went through the ruck as well, giving ‘DJ’ a well-earned spell. Gavin Vassallo, Mark Tyrell and Jackson Casey dominated the centre clearances and prevented the Eagles from getting their hands on the footy

first. Jason Ferraro showed his grunt. In attack, the Sharks set-up with Shane McDonald, Owen Hulett and Trent Dennis-Lane. Between them, they booted 10 goals. Dennis-Lane booted five, Hulett three and McDonald two. Gary Carpenter set up the defensive half, Mark Douglas was strong and James Murnane provided great drive from half back. Beau Bailey showed his class throughout but really found touch in the last quarter.

It wasn’t a great day at the office for Edithvale-Aspendale, who looked flatfooted in the opening half. The Eagles outscored the Sharks in the second half, six goals to four, including four straight goals in the third quarter. However, the Sharks always had the answers. Graeme Yeats tried everything. He threw the magnets around at half time and it appeared to work for a period. Michael Bussey and Chris Wylie were both at the centre bounces in the

second half and mark Mullins went forward – he booted three goals. Liam Harris was the Eagles’ best while Stevey Mannix, Brendan Neville and Matt Clark worked hard. The Sharks thrashed YCW earlier in the season are every chance to prevent YCW winning its fourth premiership in a row. Next week, Frankston YCW will play Mt Eliza in the Under 19s, Seaford will tackle Mt Eliza in the Reserves and Bonbeach and Frankston YCW will battle it out in the seniors.

By Toe Punt FRANKSTON Bombers will play Sorrento in the 2017 MPNFL Nepean Division Grand Final this Saturday at Frankston Park after beating Rosebud by three goals. In a tight and highly contested affair, there was very little in the game all afternoon in terms of the scoreboard but Frankston always seemed to have the edge, eventually winning 10.11 (71) to 8.5 (53). There were no goals kicked in the

opening 12 minutes of the game, such was the contest. However, goals to Lachy Mew and Keegan Downie saw Rosebud take a five-point lead into the first change. Frankston took the ascendancy in the second quarter but failed to make the opposition pay on the scoreboard, finishing the quarter with 2.5 to 1.1. The second half was very much like the first, contested footy with the battle of defences. Jarryd Amalfi and best on ground Ryan Marks-Logan dominated

across half back for the Bombers while Jackson McRae and Brenton Davidge had the better of Beau Muston and Zac Longham respectively. Frankston defender Corey Buchan got the job on Keegan Downie and kept him to two goals. Unfortunately for Rosebud, there wasn’t another forward that even looked likely to take a mark and kick a goal. The Buds’ decision making taking the ball forward was also questionable, as it kicked to unmarked oppo-

sition players consistently. Ruckmen Ben Dwyer and Ryan Kitchen broke even for the first three quarters, before Kitchen left the field in the third quarter with a hamstring injury and didn’t reappear. With the game absolutely in the balance in the last quarter and Dwyer dominating Corey Micari, the fact that Kitchen didn’t come back onto the ground provides enormous doubt over his availability in the Grand Final this week. The game was always going to be won and lost through the middle and

it was Frankston’s depth of rotations through this part of the ground that won out. Matt Harris was superb, Mitch Bosward and league medal winner Jason Kingsbury were outstanding and Dale Sutton and Alex Harnett were amongst the best players on the park. Sean Downie was magnificent for the Buds and Jack Jarman played his best final, however, the depth beyond that was not there. Some of Rosebud’s bigger name midfielders just didn’t bring their Agame.

Up for the cup: Sorrento Sharks will take on Frankston Bombers in the Nepean League Grand Final. Picture: Andrew Hurst