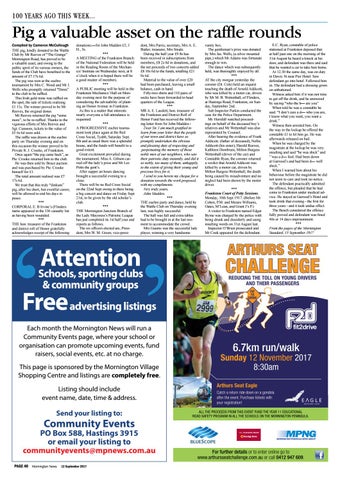 Pig a valuable asset on the raffle rounds Compiled by Cameron McCullough THE pig, kindly donated to the Wattle Club by Mr Reeves of “The Grange” Mornington Road, has proved to be a valuable asset, and owing to the public spirit of its various owners, the funds of the Club have benefited to the amount of £7 17s 6d. The pig was won at the euchre tournament by Mrs C. Wood and Mr J. Wells who promptly returned “Denis” to the club to be raffled. This Irish gold mine was raffled on the spot, the sale of tickets realising £1 11s. The winner proved to be Mr Reeves, the original donor. Mr Reeves returned the pig “some more”, to be re-raffled. Thanks to the vigorous efforts of Mrs Reeves and Sgt. Cunneen, tickets to the value of £5 6s 6d were sold. The raffle was drawn at the euchre party on Thursday evening and on this occasion the winner proved to be Private R. J. Crooke, of Frankston. Once again “the pig came back”, as Pte. Crooke returned him to the club. He was then sold by Bruce auction and was purchased by Pte. Crooke himself for £1. The total amount realised was £7 17s 6d. We trust that this truly “dinkum” pig, after his short, but eventful career, will be allowed to end his days in peace. *** CORPORAL E. B Irvine’s (Flinders name appeared in the 336 casualty list as having been wounded. *** THE hon. treasurer of the Frankston and district roll of Honor gratefully acknowledges receipt of the following

donations:—Sir John Madden £5; J H., 5s. *** A MEETING of the Frankston Branch of the National Federation will be held in the Reading Room of the Mechanics’ Institute on Wednesday next, at 8 o’clock when it is hoped there will be a good muster of members. *** A PUBLIC meeting will be held in the Frankston Mechanics’ Hall on Monday evening next for the purpose of considering the advisability of planting an Honor Avenue in Frankston. As this is a matter that interests nearly everyone a full attendance is requested. *** A PROGREESSIVE euchre tournament took place again at the Red Cross Social, Tyabb, Saturday Sept. 8th and as usual there was a splendid house, and the funds will benefit to a good extent. Great excitement prevailed during the tournament. Miss A. Gibson carried off the lady’s prize and Mr Les Potts the gent’s. After supper an hours dancing brought a successful evening to a close. There will be no Red Cross Social on the 22nd Sept owing to there being a big concert and dance on Friday Sept 21st, to be given by the old scholar’s club. *** THE Mornington Junction Branch of the Lady Mayoress’s Patriotic League has just completed its 1st half year and reports as follows. The six officers elected are, President, Mrs W. M. Green; vice-presi-

dent, Mrs Parris; secretary, Mrs A. E. Butler; treasurer, Mrs Smale. During the half year £9 8s has been received in subscriptions from members, £8 2s 0d in donations, and the net proceeds of two concerts added £8 10s 6d to the funds, totalling £21 0s 6d. Material to the value of over £20 had been purchased, leaving a small balance, cash in hand. Fifty-two shirts and 110 pairs of socks have been forwarded to head quarters of the League. *** MR A. E. Lasslett, hon. treasurer of the Frankston and District Roll of Honor Fund has received the following letter from Sir John Madden:Dear Sir. I am much gratified to learn from your letter that the people of our town and district have so promptly undertaken the obvious and pleasing duty of respecting and .perpetuating the memory of those noble men of our neighbors, who saw their patriotic duty instantly, and did it so nobly, too many of them, unhappily, to the extent of giving their young and precious lives for it. I send to you herein my cheque for a donation towards the work proposed, with my compliments. Very truly yours, John Madden. *** THE euchre party and dance, held by the Wattle Club on Thursday evening last, was highly successful. The hall was full and extra tables had to be brought in at the last moment to accommodate the crowd. Mrs Guums was the successful lady player, winning a very handsome

Free advertising listings Each month the Mornington News will run a Community Events page, where your school or organisation can promote upcoming events, fund raisers, social events, etc. at no charge. This page is sponsored by the Mornington Village Shopping Centre and listings are completely free. Listing should include event name, date, time & address.

PO Box 588, Hastings 3915 or email your listing to communityevents@mpnews.com.au PAGE 40

vanity box. The gentleman’s prize was donated by Mrs Jas. Wells, (a silver mounted pipe,) which Mr Adams was fortunate enough to win. The dance which was subsequently held, was thoroughly enjoyed by all. *** AT the city morgue yesterday the coroner (Dr. Cole) held an inquest touching the death of Arnold Addicott, who was killed by a motor car, driven by Mr M. B. Wettenhall, of Flinders, at Hastings Road, Frankston, on Sunday, September 2nd. Sub Inspector Parkin conducted the case for the Police Department. Mr. Horsfall watched proceedings on behalf of the deceased boy’s relatives and Mr Wettenhall was also represented by Counsel. After hearing the evidence of Frank Addicott. (father of deceased), Nellie Addicott (his sister), Harold Reeves, Kathleen Dombrain, Milton Burgess Wettenhall (driver of the car) and Constable Ryan, the coroner returned a verdict that Arnold Addicott was killed by a motor car, driven by Milton Burgess Wettenhall, the death being caused by misadventure and no neglect had been shown by the motor driver. *** Frankston Court of Petty Sessions. Monday, 10th Sept 1917. (Before Mr Cohen, P.M. and Messrs Williams, Oates, M’Lean, and Grant J’s P.) A visitor to Frankston named Edgar Byrne was charged by the police with being drunk and disorderly and using insulting words on 31st August last. Inspector O’Brien prosecuted and Mr Cook appeared for the defendant.

E.C. Ryan, constable of police stationed at Frankston deposed that at half past one on the morning of the 31st August he heard a knock at his door, and defendant was there and said that he wanted a car to take him home. At 12.30 the same day, was on duty in Davey St near Pier Hotel. Saw defendant go into hotel. Followed him in. The defendant had a dressing gown on unbuttoned. Witness asked him if it was not time to get off the drink, and he answered by saying “who the h— are you” When told he was a constable he said. “I don’t care a d— who you are, I know what you want; you want a drink.” Witness then arrested him. On the way to the lockup be offered the constable £1 to let him go. He was afterwards released on bail. When he was charged by the magistrate at the lockup he was very insulting and said “he was shick” and ‘’was a d— fool. Had been down at Garrood’s and had been d— well shick.” When I warned him about his behaviour before the magistrate he did not seem to care and took no notice. The defendant practically admitted the offence, but pleaded that he had come to Frankston under medical advice. He stayed at Garrood’s Hotel and took drink that evening - the first for three years - and it took undue effect. The Bench considered the offence fully proved and defendant was fined 40s or 14 days imprisonment. *** From the pages of the Mornington Standard, 15 September 1917