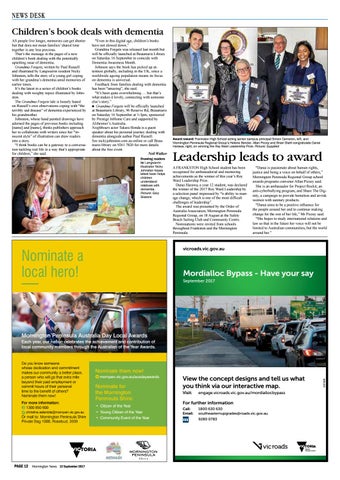 Children’s book deals with dementia AS people live longer, memories can get shorter but that does not mean families’ shared time together is any less precious. That’s the message in the pages of a new children’s book dealing with the potentially upsetting issue of dementia. Grandma Forgets, written by Paul Russell and illustrated by Langwarrin resident Nicky Johnston, tells the story of a young girl coping with her grandma’s dementia amid memories of earlier times. It’s the latest in a series of children’s books dealing with weighty topics illustrated by Johnston. The Grandma Forgets tale is loosely based on Russell’s own observations coping with “the terribly sad disease” of dementia experienced by his grandmother. Johnston, whose hand painted drawings have adorned the pages of previous books including [name] and [name], thinks publishers approach her to collaborate with writers since her “innocent style” of illustration can draw readers into a story. “I think books can be a gateway to a conversation tackling real life in a way that’s appropriate for children,” she said.

“Even in this digital age, children’s books have not slowed down.” Grandma Forgets was released last month but will be officially launched at Beaumaris Library on Saturday 16 September to coincide with Dementia Awareness Month. Johnson says the book has picked up attention globally, including in the UK, since a worldwide ageing population means its focus on dementia is universal. Feedback from families dealing with dementia has been “amazing”, she said. “It’s been quite overwhelming … but that’s what makes it lovely, connecting with someone else’s story.” n Grandma Forgets will be officially launched at Beaumaris Library, 96 Reserve Rd, Beaumaris on Saturday 16 September at 1-3pm, sponsored by Prestige InHome Care and supported by Alzheimer’s Australia. Neighbours actor Takara Honda is a guest speaker about his personal journey dealing with dementia alongside author Paul Russell. See nickyjohnston.com.au online or call Beaumaris library on 9261 7820 for more details about the free event. Neil Walker Drawing readers in: Langwarrin illustrator Nicky Johnston hopes latest book helps children understand relatives with dementia. Picture: Gary Sissons

Leadership leads to award A FRANKSTON High School student has been recognised for ambassadorial and mentoring achievements as the winner of this year’s Roy Ward Leadership Prize. Danai Harawa, a year 12 student, was declared the winner of the 2017 Roy Ward Leadership by a selection panel impressed by “n ability to manage change, which is one of the most difficult challenges of leadership”. The award was presented by the Order of Australia Association, Mornington Peninsula Regional Group, on 18 August at the Safety Beach Sailing Club and Community Centre. Nominations were invited from schools throughout Frankston and the Mornington Peninsula.

“Danai is passionate about human rights, justice and being a voice on behalf of others,” Mornington Peninsula Regional Group school awards programs convener Allan Pizzey said. She is an ambassador for Project Rockit, an anti-cyberbullying program, and Share The Dignity, a campaign to provide homeless and at-risk women with sanitary products. “Danai aims to be a positive influence for the people around her and to continue making change for the rest of her life,” Mr Pizzey said. “She hopes to study international relations and law so that in the future her voice will not be limited to Australian communities, but the world around her.”

Mordialloc Bypass - Have your say September 2017

Mornington Peninsula Australia Day Local Awards Each year, our nation celebrates the achievement and contribution of local community members through the Australian of the Year Awards.

View the concept designs and tell us what you think via our interactive map. Visit:

Do you know someone whose dedication and commitment makes our community a better place, a person who will go that extra mile beyond their paid employment or commit hours of their personal time to the benefit of others? Nominate them now!