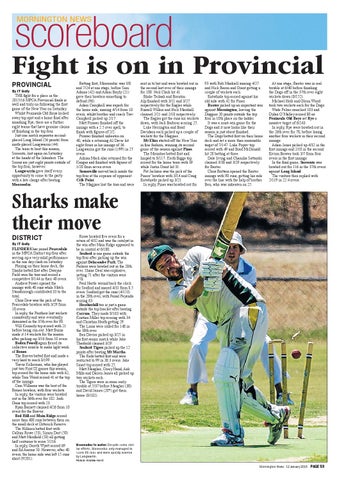 Fight is on in Provincial PROVINCIAL By IT Gully THE fight for a place in the 2015/16 MPCA Provincial finals is well and truly on following the first game of the New Year on Saturday. Whilst Peninsula Old Boys locked away top spot and a home final after smashing Rye, there are a further eight teams that have genuine claims of finishing in the top four. Just one match separates secondplaced Long Island (56 points) from ninth-placed Langwarrin (44). The team to beat this season, Sorrento, lost again on Saturday at the hands of the Islanders. The Sorras are just eight points outside of the top four, however. Langwarrin gave itself every opportunity to come to the party with a late charge after beating Moorooduc.

Batting first, Moorooduc was 3/8 and 7/24 at one stage, before Sam Adams (42) and Adam Bayly (21) gave their bowlers something to defend (96). Adam Campbell was superb for the home side, snaring 4/14 from 10 overs, whilst brother and coach Trav Campbell picked up 2/17. Matt Prosser finished off the innings with a 2.5 over spell, to finish with figures of 2/2. Prosser finished unbeaten on 40, while a returning Al Davie hit eight fours in his innings of 36. Langwarrin got the runs (1/99) in 27 overs. Adrian Mack also returned for the Kangas and finished with figures of 1/20 from seven overs. Somerville moved back inside the top four at the expense of opponent Crib Point. The Magpies lost the toss and were

sent in to bat and were bowled out in the second last over of their innings for 100. Neil Clark hit 41. Blake Terlaak and Brenton Alp finished with 3/11 and 3/27 respectively for the Eagles while Russell Wilkes and Nick Marshall claimed 2/21 and 2/18 respectively. The Eagles got the runs six wickets down, with Jack Barbour scoring 25. Luke Herrington and Brad Davidson each picked up a couple of wickets for the Magpies. Mt Eliza started-off the New Year in fine fashion, winning its second game of the season against Pines. The Mounties batted first and limped to 8/117. Keith Biggs top scored for the home team with 39 while Justin Grant hit 31. Pat Jackson was the pick of the Pinersâ&#x20AC;&#x2122; bowlers with 3/14 and Craig Entwhistle picked up 3/21. In reply, Pines was bowled out for

93 with Rob Maskiell snaring 4/27 and Nick Baron and Grant getting a couple of wickets each. Entwhisle top scored against his old side with 42 for Pines. Baxter picked up an important win against Mornington, leaving the Doggies 20 points outside the top four in 10th place on the ladder. It was a must-win game for the Dogs and it now looks like their season is just about finished. The Dogs batted first on their home deck and set a more than reasonable target of 7/147. Luke Popov top scored with 49 and Brad McDonald hit 28 batting at three. Dale Irving and Chamika Sattambi claimed 3/38 and 3/29 respectively for Baxter. Chris Brittain opened the Baxter innings with 90 runs, getting his side over the line with the help of brother Ben, who was unbeaten on 25.

At one stage, Baxter was in real trouble at 6/40 before finishing the Dogs off in the 37th over eight wickets down (8/152). Michael Heib and Glenn Wood took two wickets each for the Dogs. Wade Pelzer smacked 103 and Dylan Oâ&#x20AC;&#x2122;Malley scored 80 as Peninsula Old Boys set Rye a massive target of 6/243. In reply, Rye were bowled-out in the 26th over for 78, before losing another four wickets in their second innings. Adam Jones picked up 4/32 in the first innings and 2/10 in the second. Eivion Bowen took 3/7 from four overs in the first innings. In the final game, Sorrento was bowled out for 116 in the 37th overs against Long Island. The visitors then replied with 2/119 in 22.4 overs.

By IT Gully FLINDERS has joined Pearcedale in the MPCA District top four after serving-up a very solid performance in the one day clash on Saturday. Playing on their home deck, the Sharks batted first after Dwayne Field won the toss and scored a competitive 8/144 in their 40 overs. Andrew Power opened the innings with 40 runs while Mitch Stansborough contributed 33 to the total. Chris Dew was the pick of the Pearcedale bowlers with 3/29 from 10 overs. In reply, the Panthers lost wickets consistently and were eventually dismissed in the 35th over for 98. Will Kennedy top scored with 21 before being run-out. Matt Burns made it 14 wickets for the season after picking-up 3/16 from 10 overs. Baden Powell again flexed its collective muscle to make light work of Boneo. The Braves batted first and made a very hard to reach 8/199. Travis Kellerman, who has played just two First IX games this season, top scored for the home side with 62, while Tom Wood scored 41 at the top of the innings. Cam Williams was the best of the Boneo bowlers, with four wickets. In reply, the visitors were bowled out in the 36th over for 102. Josh Gana top scored with 23. Ryan Barnett claimed 4/26 from 10 overs for the Braves. Red Hill and Main Ridge scored more than 400 runs between them on the small deck at Ditterich Reserve. The Hillmen batted first with Callum Rowe (53), Simon Dart (50) and Matt Merifield (50) all getting half centuries to score 5/216. In reply, Gareth Wyatt scored 69 and Ed Aarons 50. However, after 40 overs, the home side was left 15 runs short (9/201).

Rowe bowled five overs for a return of 4/32 and was the catalyst in the win after Main Ridge appeared to be in control at 6/180. Seaford is one game outside the top four after picking up the win against Delacombe Park. The Parkers were bowled out in the 28th over. Shane Deal was explosive, netting 71 after the visitors were 7/78. Paul Hartle wound back the clock for Seaford and snared 4/31 from 8.5 overs. Seaford got the runs (4/153) in the 28th over, with Faisal Payenda scoring 63. Heatherhill too is just a game outside the top bracket after beating Carrum. They made 8/163 with Kristian Miller top scoring with 34 and Christian Heath getting 29. The Lions were rolled for 148 in the 38th over. Ben Davies picked up 3/25 in his first senior match while Jake Theobold claimed 3/29. Seaford Tigers picked up the 12 points after beating Mt Martha. The Reds batted first and were restricted to 99 in 38.3 overs. Jake Smart top scored with 25. Matt Meagher, Corey Hand, Ash Mills and Darren James all picked up two wickets each. The Tigers were in some early trouble at 5/37 before Meagher (30) and David James (20*) got them home (8/102).

Moorooduc to water: Despite some stellar efforts, Moorooduc only managed to score 96 runs and were quickly overrun by Langwarrin. Picture: Andrew Hurst