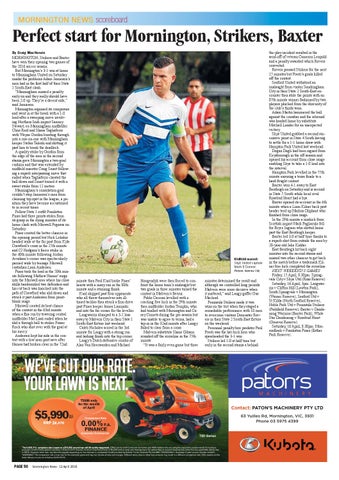 Perfect start for Mornington, Strikers, Baxter By Craig MacKenzie MORNINGTON, Strikers and Baxter have won their opening two games of the 2016 soccer season. But Morningtonâ&#x20AC;&#x2122;s 3-1 win at home to Manningham United on Saturday masks the problems Adam Jamiesonâ&#x20AC;&#x2122;s men had in the first half of their State 1 South-East clash. â&#x20AC;&#x153;Manningham missed a penalty early on and they really should have been 2-0 up. Theyâ&#x20AC;&#x2122;re a decent side,â&#x20AC;? said Jamieson. Mornington regained its composure and went in at the break with a 1-0 lead after a sweeping move involving Northern Irish import Sammy Stewart, ex-Manningham midfielder Chris Reid and Shane Tagliaferro with Wayne Gordon bursting through into a one-on-one with Manningham keeper Stefan Taleski and slotting it past him to break the deadlock. A quality strike by Gordon from the edge of the area in the second stanza gave Mornington a two-goal cushion and that was extended by midfield maestro Craig Smart following a superb interpassing move that ended when Tagliaferro chested the ball down and Smart buried it with a sweet strike from 12 metres. Manninghamâ&#x20AC;&#x2122;s consolation goal couldnâ&#x20AC;&#x2122;t stop Jamiesonâ&#x20AC;&#x2122;s men from claiming top spot in the league, a position they have become accustomed to in recent times. Fellow State 1 outfit Frankston Pines had three points stolen from its grasp in the dying minutes of its home clash with Morwell Pegasus on Saturday. Pines created the better chances in the opening period but Nick Lekakis headed wide at the far post from Kyle Crawfordâ&#x20AC;&#x2122;s cross in the 25th minute and CJ Hodgsonâ&#x20AC;&#x2122;s fierce strike in the 40th minute following Jordan Avrahamâ&#x20AC;&#x2122;s corner was spectacularly parried wide by teenage Morwell custodian Liam Andersen. Pines took the lead in the 50th minute following Mathew Hamesâ&#x20AC;&#x2122; surge into the Morwell area where his close skills bamboozled two defenders and his cut back was knocked into the path of Crawford who slid down and struck it past Andersen from pointblank range. Morwell created its best chance of the contest in the 63rd minute when a fine run by towering central midfielder Mat Luak ended when he slid a through ball to striker Fraser Rock who shot over with the goal at his mercy. Andersen kept his side in the contest with a low near-post save after Hames had broken clear in the 72nd

minute then Paul Kuol broke Pinesâ&#x20AC;&#x2122; hearts with a mazy run in the 88th minute and a stunning finish. Kuol skipped past four opponents who all threw themselves into illtimed tackles then struck a firm drive past Pines keeper James Laminski and into the far corner for the leveller. Langwarrin slumped to a 3-1 loss away to Malvern City in their State 1 South-East fixture last weekend. Caleb Nicholes scored in the 3rd minute for Langy with a strong run and lashing finish into the top corner. Langyâ&#x20AC;&#x2122;s Dutch defensive combo of Alax Van Heerwarden and Michael

Hoogendyk were then forced to confront the home teamâ&#x20AC;&#x2122;s onslaught but two goals in three minutes turned the contest in Malvernâ&#x20AC;&#x2122;s favour. Pablo Caceras levelled with a cracking free kick in the 29th minute then midfielder Jordan Templin, who had trialled with Mornington and Casey Comets during the pre-season but was unable to agree to terms, had a tap-in in the 32nd minute after Langy failed to clear from a cross. Malvern substitute Shane Gibson rounded off the scoreline in the 75th minute. â&#x20AC;&#x153;It was a fairly even game but three

minutes determined the result and although we controlled long periods Malvern were more decisive when it mattered,â&#x20AC;? said Langy gaffer Gus Macleod. Peninsula Strikers made it two wins on the trot when they staged a remarkable performance with 10 men to overcome visitors Doncaster Rovers in their State 2 South-East fixture on the weekend. Perennial penalty box predator Paul Presti was the hat-trick hero who spearheaded the 3-1 win. Strikers led 1-0 at half time but early in the second stanza a behind-

the-play incident resulted in the send-off of veteran Cameron Leopold and a penalty awarded which Rovers converted. Rovers pressed Strikers for the next 15 minutes but Prestiâ&#x20AC;&#x2122;s goals killed off the contest. Seaford United withstood an onslaught from visitor Sandringham City in their State 2 South-East encounter then stole the points with an 87th minute winner fashioned by two players plucked from the obscurity of the clubâ&#x20AC;&#x2122;s thirds team. Adam Martin hammered the ball against the crossbar and the rebound was headed home by substitute Mitchell Lander for an unexpected victory. Skye United grabbed a second successive point in State 4 South having to settle for a 1-1 home draw with Hampton Park United last weekend. Dogan Dagli had been signed from Keysborough in the off-season and opened his account from close range enabling Skye to take a 1-0 lead into the interval. Hampton Park levelled in the 75th minute ensuring a tense finale to a hard-fought contest. Baxter won 4-1 away to East Bentleigh on Saturday and is second in State 5 South while local rival Rosebud Heart had a bye. Baxter opened its account in the 6th minute when a Liam Kilner back post header teed up Markus Oliphant who finished from close range. In the 29th minute a miskick from Scottish import Mark Pagliarulo fell for Bryce Ingram who slotted home past the East Bentleigh keeper. Baxter led 3-0 at half time thanks to a superb shot from outside the area by 20-year-old Jake Kidder. East Bentleigh hit back eight minutes into the second stanza and missed two other chances to get back in the match before a trademark Kilner free kick completed the scoreline. NEXT WEEKENDâ&#x20AC;&#x2122;S GAMES Friday, 15 April, 8.30pm: Springvale City v Skye Utd (Ross Reserve). Saturday, 16 April, 3pm: Langwarrin v Clifton Hill (Lawton Park), South Springvale v Mornington (Warner Reserve), Seaford Utd v St Kilda (North Seaford Reserve), Noble Park Utd v Peninsula Strikers (Parkfield Reserve), Baxter v Dandenong Warriors (Baxter Park), White Star Dandenong v Rosebud Heart (Greaves Reserve). Saturday, 16 April, 8.30pm: Mooroolbark v Frankston Pines (Esther Park Reserve).