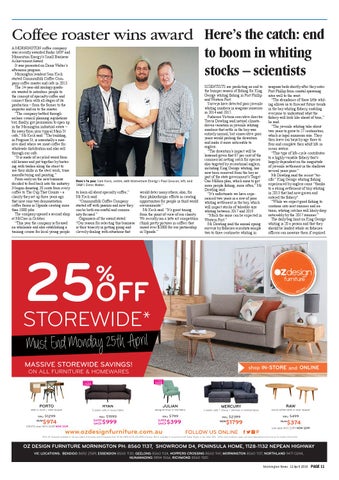 Coffee roaster wins award Here’s the catch: end A MORNINGTON coffee company was recently awarded Radio 3AW and Momentum Energy’s Small Business Achievement Award. It was presented on Denis Walter’s afternoon program. Mornington resident Sam Keck started Commonfolk Coffee Company coffee roaster and cafe in 2013. The 24-year-old zoology graduate wanted to introduce people to the concept of specialty coffee and connect them with all stages of its production – from the farmer to the importer and on to the roaster. “The company battled through archaic council planning regulations but, finally, got permission to open up in the Mornington industrial estate – far away from your typical Main St cafe,” Mr Keck said. “The building, in Progress St, is essentially a massive shed where we roast coffee for wholesale distribution and also sell through our cafe. “It is made of recycled wood from old houses and put together by bartering with tradies along the street to use their skills in the steel work, truss manufacturing and painting.” From early on the new business decided to feed back into the industry. It began donating 20 cents from every coffee to The Cup That Counts – a charity they set up three years ago that now runs two demonstration coffee farms in Uganda creating more than 1000 jobs. The company opened a second shop at McCrae in October. “This year the company is focused on wholesale and also establishing a training course for local young people

to boom in whiting stocks – scientists

to learn all about specialty coffee,” Mr Keck said. “Commonfolk Coffee Company started off with passion and now they can be both successful and community focused.” Organisers of the award stated: “Our reason for selecting this business is their tenacity in getting going and cleverly dealing with situations that

would deter many others; also, for their philanthropic efforts in creating opportunities for people in third world environments.” Mr Keck said: “It’s great timing from the point of view of our charity. We recently ran a latte art competition (think pretty pictures in coffee) that raised over $2000 for our partnership in Uganda.”

SCIENTISTS are predicting an end to the bumper season of fishing for King George whiting fishing in Port Phillip and Western Port. Surveys have detected poor juvenile whiting numbers in seagrass nurseries in 2014 and 2015. Fisheries Victoria executive director Travis Dowling said natural climatedriven variation in juvenile whiting numbers that settle in the bay was entirely normal, but consecutive poor years would prolong the downturn and make it more noticeable to anglers. “The downturn’s impact will be lessened given that 87 per cent of the commercial netting catch for species also targeted by recreational anglers, including King George whiting, has now been removed from the bay as part of the state government’s Target One Million plan, which aims to get more people fishing, more often,” Mr Dowling said. “It’s unfortunate we have experienced two years in a row of poor whiting settlement in the bay, which will impact stocks of takeable size whiting between 2017 and 2019. “Much the same can be expected in Western Port.” Mr Dowling said the annual spring surveys by fisheries scientists sample two to three centimetre whiting in

seagrass beds shortly after they enter Port Phillip from coastal spawning sites well to the west. “The abundance of these little whiting allows us to forecast future trends in the bay whiting fishery, enabling everyone to understand what the fishery will look like ahead of time,” he said. “The juvenile whiting take about two years to grow to 27 centimetres, which is legal minimum size. They then leave our bays by age three to four and complete their adult life in ocean waters. “This type of life-cycle contributes to a highly variable fishery that’s largely dependent on the magnitude of juvenile settlement in the shallows several years prior.” Mr Dowling said the recent “terrific” King George whiting fishing experienced by anglers came “thanks to a strong settlement of tiny whiting in 2013 that had now grown and entered the fishery”. “While we expect good fishing to continue into next summer and autumn, whiting catches will likely drop noticeably by the 2017 summer.” The daily bag limit on King George whiting is 20 a person and that they should be landed whole so fisheries officers can measure them if required.

round coffee table in clear lacquer

25% off storewide available on all new orders of furniture and homewares from 16-04-2016 till 25-04-2016 inclusive. Not to available in conjunction with Super Savers or any other offer. Terms and conditions apply visit www.ozdesignfurniture.com.au for further information.