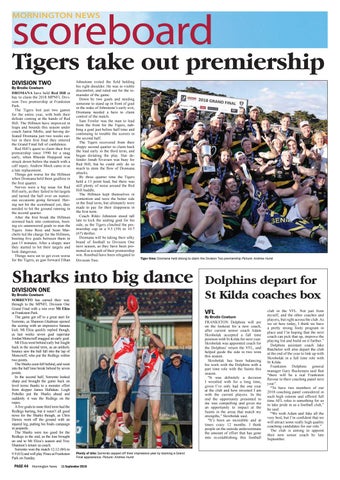 By Brodie Cowburn DROMANA have held Red Hill at bay to claim the 2018 MPNFL Division Two premiership at Frankston Park. The Tigers lost just two games for the entire year, with both their defeats coming at the hands of Red Hill. The Hillmen have improved in leaps and bounds this season under coach Jamie Mollo, and having defeated Dromana just two weeks earlier in their first final they entered the Grand Final full of confidence. Red Hill’s quest to claim their first premiership since 1990 hit a snag early, when Rheede Hopgood was struck down before the match with a calf injury. Andrew Mock came in as a late replacement. Things got worse for the Hillmen when Dromana held them goalless in the first quarter. Nerves were a big issue for Red Hill early, as they failed to hit targets and turned the ball over on numerous occasions going forward. Having not hit the scoreboard yet, they needed to hit the ground running in the second quarter. After the first break the Hillmen stormed back into contention, booting six unanswered goals to stun the Tigers. Jono Ross and Sean Marchetti led the charge for the Hillmen, booting five goals between them in just 15 minutes. After a sloppy start they started to hit their targets and look dangerous. Things were set to get even worse for the Tigers, as gun forward Ethan

Johnstone exited the field holding his right shoulder. He was in visible discomfort, and ruled out for the remainder of the game. Down by two goals and needing someone to stand up in front of goal in the wake of Johnstone’s early exit, Dromana needed a hero to claim control of the match. Sam Fowler was the man to lead from the front for the Tigers, nabbing a goal just before half time and continuing to trouble the scorers in the second half. The Tigers recovered from their sloppy second quarter to claim back the lead early in the third term, and began dictating the play. Star defender Jonah Siversen was busy for Red Hill, but he could only do so much to stem the flow of Dromana attacks. By three quarter time the Tigers held a 13 point lead, but there was still plenty of noise around the Red Hill huddle. The Hillmen kept themselves in contention and were the better side in the final term, but ultimately were made to pay for their sloppiness in the first term. Coach Rikki Johnston stood tall late to kick the sealing goal for his side, as the Tigers clinched the premiership cup in a 9.5 (59) to 10.7 (67) thriller. Dromana will be taking their silky brand of football to Division One next season, as they have been promoted as a result of their premiership win. Rosebud have been relegated to Division Two.

Sharks into big dance DIVISION ONE

By Brodie Cowburn SORRENTO has earned their way through to the MPNFL Division One Grand Final with a win over Mt Eliza at Frankston Park. The game got off to a great start for Sorrento, as Shannon Gladman opened the scoring with an impressive banana kick. Mt Eliza quickly replied though, as last weeks seven goal superstar Jordan Moncrieff snagged an early goal. Mt Eliza went behind early but fought back in the second term, as an unlikely bounce saw the ball fall into the lap of Moncrieff, who put the Redlegs within two points. The Sharks soon fell behind, and went into the half time break behind by seven points. In the second half, Sorrento looked sharp and brought the game back on level terms thanks to a monster effort from skipper James Hallahan. Leigh Poholke put the Sharks ahead and suddenly it was the Redlegs on the ropes. A five goals to none third term had the Redlegs hurting, but it wasn’t all good news for the Sharks though, as Chris Dawes went off the ground with an injured leg, putting his finals campaign in jeopardy. The Sharks were too good for the Redlegs in the end, as the loss brought an end to Mt Eliza’s season and Troy Shannon’s tenure as coach. Sorrento won the match 12.12 (84) to 9.9 (63) and will play Pines at Frankston Park on Sunday.

By Brodie Cowburn FRANKSTON Dolphins will are on the lookout for a new coach, after current senior coach Adam Skrobolak accepted a full time position with St Kilda for next year. Skrobolak was appointed coach for the Dolphins’ return the VFL, and helped guide the side to two wins this season. Skrobolak has been balancing his work with the Dolphins with a part time role with the Saints this season. “It was definitely a decision I wrestled with for a long time, given I’ve only had the one year at the club and how invested I am with the current players. In the end the opportunity presented to me was compelling and gives me an opportunity to impact at the Saints in the areas that match my strengths,” Skrobolak said. “It’s been an incredible and at times crazy 12 months. I think people on the outside underestimate the amount of effort that has gone into re-establishing this football

club in the VFL. Not just from myself, and the other coaches and players, but right across the club. As we sit here today, I think we have a pretty strong footy program in place and I’m hoping that the next coach can pick that up, improve the playing list and build on it further.” Dolphins assistant coach Jake Batchelor will also depart the club at the end of the year to link up with Skrobolak in a full time role with St Kilda. Frankston Dolphins general manager Gary Buckenara said that “there will be a real Frankston flavour to their coaching panel next year”. “To have two members of our 2018 coaching panel considered in such high esteem and offered full time AFL roles is something for us to take pride in as a football club,” he said “We wish Adam and Jake all the very best, but I’m confident that we will attract some really high quality coaching candidates for our role.” The club is aiming to appoint their new senior coach by late September.