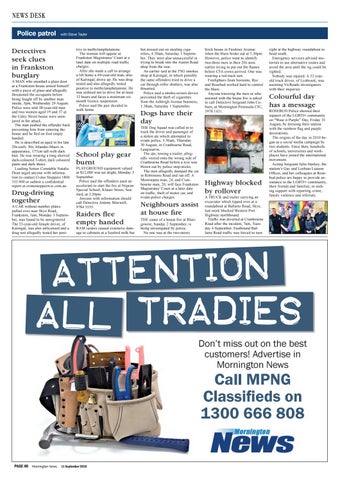 A MAN who smashed a glass door at a Frankston house armed himself with a piece of glass and allegedly threatened the occupants before being fought off by another man inside, 5pm, Wednesday 29 August. Police were told 38-year-old man and two women aged 19 and 37 at the Caley Street house were uninjured in the attack. The man pushed the offender back preventing him from entering the house and he fled on foot empty handed. He is described as aged in his late 20s-early 30s, Islander-Maori in appearance, 177cm tall with dark hair. He was wearing a long sleeved dark-coloured T-shirt, dark coloured pants and dark shoes. Leading Senior Constable Natalie Dean urged anyone with information to contact Crime Stoppers 1800 333 000 or submit a confidential report at crimestoppersvic.com.au

A CAR without number plates pulled over near Skye Road, Frankston, 1am, Monday 3 September, was found to be unregistered. The 55-year-old female driver, of Karingal, was also unlicensed and a drug test allegedly tested her posi-

tive to methylamphetamine. The woman will appear at Frankston Magistrates’ Court at a later date on multiple road traffic charges. After she made a call to arrange a lift home a 49-year-old man, also of Karingal, drove up. He was drug tested and also allegedly tested positive to methylamphetamine. He was ordered not to drive for at least 12 hours and faces a minimum six month licence suspension. Police said the pair decided to walk home.

brick house in Fawkner Avenue when the blaze broke out at 5.30pm. However, police want to identify two-three men in their 20s seen earlier trying to put out the flames before CFA crews arrived. One was wearing a red track suit. Firefighters from Sorrento, Rye and Rosebud worked hard to control the blaze. Anyone knowing the men or who assisted with the house fire is asked to call Detective Sergeant John Coburn, at Mornington Peninsula CIU, 5978 1431.

but missed out on stealing cigarettes, 4.50am, Saturday 1 September. They were also unsuccessful in trying to break into the Austin Road shop from the rear. An earlier raid at the TSG smokes shop at Karingal, in which possibly the same offenders tried to drive a car through roller shutters, was also thwarted. Police said a smoke-screen device prevented the theft of cigarettes from the Ashleigh Avenue business, 1.58am, Saturday 1 September.

Dogs have their day

THE Dog Squad was called in to track the driver and passenger of a stolen ute which attempted to evade police, 5.56am, Thursday 30 August, in Cranbourne Road, Langwarrin. The ute, towing a trailer, allegedly veered onto the wrong side of Cranbourne Road before a tyre was blown out by police stop-sticks. The men allegedly dumped the car in Robinsons Road and ran off. A Mooroopna man, 24, and Cranbourne man, 20, will face Frankston Magistrates’ Court at a later date on traffic, theft of motor car, and evade-police charges.

Neighbours assist at house fire THE cause of a house fire at Blairgowrie, Sunday 2 September, is being investigated by police. No one was at the two-storey

A TRUCK and trailer carrying an excavator which tipped over at a roundabout at Ballarto Road, Skye, last week blocked Western Port Highway northbound. Traffic was diverted at Cranbourne Road after the incident, 7am, Tuesday 4 September. Eastbound Ballarto Road traffic was forced to turn

right at the highway roundabout to head south. Emergency services advised motorists to use alternative routes and avoid the area until the rig could be righted. Nobody was injured. A 33 yearold truck driver, of Lynbrook, was assisting VicRoads investigators with their inquiries.

Colourful day has a message

ROSEBUD Police showed their support of the LGBTI+ community on “Wear it Purple” Day, Friday 31 August, by dressing their station with the rainbow flag and purple decorations. The origins of the day in 2010 began as a social media campaign by two students. Since then, hundreds of schools, universities and workplaces have joined the international movement. Acting Sergeant Julia Starkey, the station’s Gay and Lesbian Liaison Officer, and her colleagues at Rosebud police are happy to provide assistance to the LGBTI+ community, their friends and families, in seeking support with reporting crime, family violence and referrals.