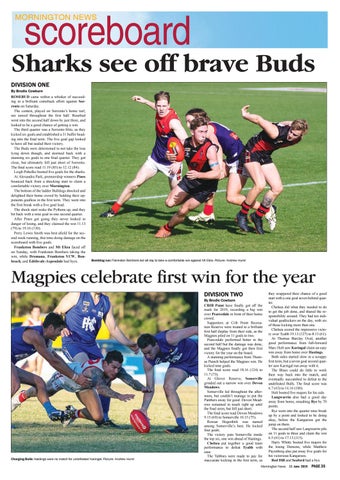 By Brodie Cowburn ROSEBUD came within a whisker of succeeding in a brilliant comeback effort against Sorrento on Saturday. The contest, played on Sorrento’s home turf, see sawed throughout the first half. Rosebud went into the second half down by just three, and looked to be a good chance of getting a win. The third quarter was a Sorrento blitz, as they kicked six goals and established a 31 buffer heading into the final term. The five goal gap looked to have all but sealed their victory. The Buds were determined to not take the loss lying down though, and stormed back with a stunning six goals to one final quarter. They got close, but ultimately fell just short of Sorrento. The final score read 11.19 (85) to 12.12 (84). Leigh Poholke booted five goals for the sharks. At Alexandra Park, premiership winners Pines bounced back from a shocking start to claim a comfortable victory over Mornington. The bottom of the ladder Bulldogs shocked and delighted their home crowd by holding their opponents goalless in the first term. They went into the first break with a five goal lead. The shock start woke the Pythons up, and they bit back with a nine goal to one second quarter. After Pines got going they never looked in danger of losing, and they claimed the win 11.13 (79) to 19.16 (130). Perry Lewis Smith was best afield for the second week running, this time doing damage on the scoreboard with five goals. Frankston Bombers and Mt Eliza faced off on Sunday, with Frankston Bombers taking the win, while Dromana, Frankston YCW, Bonbeach, and Edithvale-Aspendale had byes.

By Brodie Cowburn CRIB Point have finally got off the mark for 2019, recording a big win over Pearcedale in front of their home crowd. Supporters at Crib Point Recreation Reserve were treated to a brilliant first half display from their side, as the Magpies piled on 11 goals to two. Pearcedale performed better in the second half but the damage was done, and the Magpies finally got their first victory for the year on the board. A stunning performance from Thomas Panich helped the Magpies win. He kicked nine goals. The final score read 18.16 (124) to 11.7 (73). At Glover Reserve, Somerville grinded out a narrow win over Devon Meadows. Somerville led throughout the afternoon, but couldn’t manage to put the Panthers away for good. Devon Meadows remained in touch right up until the final siren, but fell just short. The final score read Devon Meadows 9.15 (69) to Somerville 10.15 (75). Rowan Hogenbirk was named among Somerville’s best. He kicked four goals. The victory puts Somerville inside the top six, one win ahead of Hastings. Chelsea put together a good team performance to defeat Tyabb with ease. The Yabbies were made to pay for inaccurate kicking in the first term, as

they scuppered their chance of a good start with a one goal seven behind quarter. Chelsea did what they needed to do to get the job done, and shared the responsibility around. They had ten individual goalkickers on the day, with six of those kicking more than one. Chelsea scored the impressive victory over Tyabb 19.13 (127) to 8.13 (61). At Thomas Barclay Oval, another good performance from full-forward Marc Holt saw Karingal claim an easy win away from home over Hastings. Both sides started slow in a scrappy first term, but a seven goal second quarter saw Karingal run away with it. The Blues could do little to work their way back into the match, and eventually succumbed to defeat to the undefeated Bulls. The final score was 6.7 (43) to 14.16 (100). Holt booted five majors for his side. Langwarrin also had a good day away from home, smashing Rye by 70 points. Rye went into the quarter time break up by a point and looked to be doing okay, before the Kangaroos got the jump on them. The second half saw Langwarrin pile on 11 goals to three and claim the win 6.5 (41) to 17.13 (115). Harry Whitty booted five majors for the losing Demons, while Matthew Payenborg also put away five goals for his victorious Kangaroos. Red Hill and Seaford had a bye.