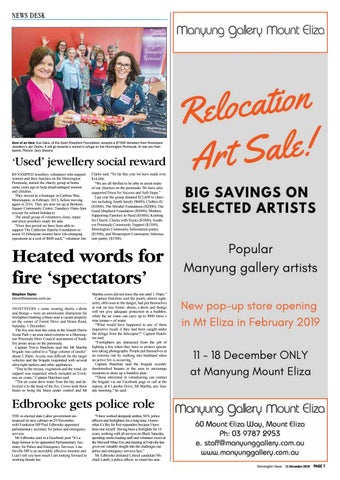 Gem of an idea: Sue Oaks, of the Good Shepherd Foundation, accepts a $7000 donation from Revamped Jewellery’s Jan Clarke. It will go towards a women’s refuge on the Mornington Peninsula. At rear are their teams. Picture: Gary Sissons

‘Used’ jewellery social reward REVAMPED Jewellery volunteers who support women and their families on the Mornington Peninsula, started the charity group at home some years ago to help disadvantaged women and children. They moved to a boutique in Carbine Way, Mornington, in February 2013, before moving again in 2016. They are now set up at Bentons Square Community Centre, Tuesdays 10am-3pm (except for school holidays). The small group of volunteers clean, repair and price jewellery ready for sale. “Over this period we have been able to support The Catherine Hamlin Foundation to assist 10 Ethiopian women have life-changing operations at a cost of $600 each,” volunteer Jan

Clarke said. “So far this year we have made over $14,000. “We are all thrilled to be able to assist many of our charities on the peninsula. We have also supported Dress for Success and Safe Steps.” Last year the group donated $12,600 to charities including Smith family ($600); Clothes 4U ($1000); The Mirabel Foundation ($2000); The Good Shepherd Foundation ($3000); Mothers Supporting Families in Need ($1000); Knitting for Charity Chicks with Sticks ($1000); Southern Peninsula Community Support ($1500); Mornington Community Information pantry ($1500), and Westernport Community Information pantry ($1500).

Heated words for fire ‘spectators’ Stephen Taylor steve@mpnews.com.au SIGHTSEERS – some wearing shorts, t-shirts and thongs – were an unwelcome distraction for firefighters battling a blaze near a vacant property on the corner of Forest Drive and Hearn Road, Saturday 1 December. The fire was near the camp at the Joseph Harris Scout Park – an area rated extreme in a Mornington Peninsula Shire Council assessment of bushfire prone areas on the peninsula. Captain Travis Hutchins said the Mt Martha brigade was called to a “large column of smoke” about 5.30pm. Access was difficult for the larger vehicles and the brigade responded with several ultra-light tankers and other appliances. “Due to the terrain, vegetation and the wind, air support was requested which included an Erickson air crane,” Captain Hutchins said. “The air crane drew water from the bay and delivered it to the head of the fire. Crews took three hours to bring the blaze under control and Mt

Martha crews did not leave the site until 1.30am.” Captain Hutchins said the poorly attired sightseers, oblivious to the danger, had put themselves at risk on two fronts: shorts, t-shirts and thongs will not give adequate protection in a bushfire, while the air crane can carry up to 9000 litres – nine tonnes – of water. “What would have happened to any of these inquisitive locals if they had been caught under the deluge from the helicopter?” Captain Hutchins said. “Firefighters are distracted from the job of fighting a fire when they have to protect spectators taking photographs. People put themselves at an extreme risk by walking into bushland when an active fire is occurring.” Captain Hutchins said the brigade recently doorknocked houses in the area to encourage residents to draw up a bushfire plan. “Those interested in volunteering can contact the brigade via our Facebook page or call at the station, at 6 Latrobe Drive, Mt Martha, any Sunday morning,” he said.

“I have worked alongside ambos, SES, police officers and firefighters for a long time. I know what it’s like for first responders because I have been one myself. Having been a firefighter for 14 years, working with all services on Black Saturday, spending weeks leading staff and volunteer crews at the Morwell Mine Fire and training at Fiskville has given me valuable insight into the challenges our police and emergency services face.” Mr Edbrooke defeated Liberal candidate Michael Lamb, a police officer, to retain his seat. Mornington News