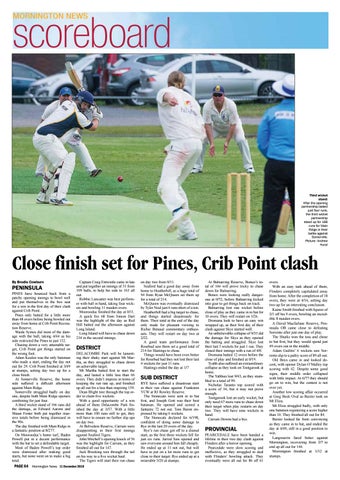 Third wicket stand: After the opening partnership lasted just four runs, the third wicket partnership stood up for 166 runs for Main Ridge in their battle against Somerville. Picture: Andrew Hurst

PINES have bounced back from a patchy opening innings to bowl well and put themselves in the box seat for a win in the first day of their clash against Crib Point. Pines only batted for a little more than 48 overs before being bowled out away from home at Crib Point Recreation Reserve. Waide Symes did most of the damage with the ball, taking 4/44 as his side restricted the Pines to just 152. Chasing down a very attainable target, Crib Point got things started on the wrong foot. Adam Keulen was the only batsman who made a start, ending the day not out for 29. Crib Point finished at 3/49 at stumps, setting day two up for a close finish. At Somerville Reserve, the home side suffered a difficult afternoon against Main Ridge. Somerville struggled badly on day one, despite both Main Ridge openers combining for just four. A third wicket stand of 166 runs did the damage, as Edward Aarons and Shaun Foster both put together massive totals before being dismissed in the 90s. The day finished with Main Ridge in a fantastic position at 8/277. On Moorooduc’s home turf, Baden Powell put in a decent performance with the bat to set a defendable target. Most of Baden Powell’s top order were dismissed after making good starts, but none went on to make a big total.

Captain Craig Entwistle came in late and put together an innings of 51 from 109 balls, to help his side to 163 all out. Robbie Lancaster was best performer with ball in hand, taking four wickets and bowling 11 maiden overs. Moorooduc finished the day at 0/11. A quick fire 68 from Simon Dart was the highlight of the day as Red Hill batted out the afternoon against Long Island. Long Island will have to chase down 234 in the second innings.

DELACOMBE Park will be lamenting their shaky start against Mt Martha, as they struggled to chase down an achievable target. Mt Martha batted first to start the day, and lasted a little less than 66 overs. They didn’t impress in terms of keeping the run rate up, and finished up all out for a less than inspiring 159. Dean Blight tore through the top order to claim five wickets. With a good opportunity of a win ahead of them Delacombe Park finished the day at 3/57. With a little more than 100 runs still to get, they will have to ensure no further slip ups on day two. At Belvedere Reserve, Carrum were disappointing in their first innings against Seaford Tigers. John Mitchell’s opening knock of 56 was the highlight for Carrum, as they finished all out for 147. Jack Brooking tore through the tail on his way to a five wicket haul. The Tigers will start their run chase

on day two from 0/11. Seaford had a good day away from home to Heatherhill, as a huge total of 94 from Ryan McQueen set them up for a total of 214. McQueen was eventually dismissed by Tyler Neal just 6 runs short of a ton. Heatherhill had a big target to chase, and things started disastrously for them. Their total at the end of the day only made for pleasant viewing to Richie Benaud commentary enthusiasts. They will restart on day two at 2/22. A good team performance from Rosebud saw them set a good total of 214 for Hastings to chase. Things would have been even better for Rosebud had they not lost their last 4 wickets for just 11 runs. Hastings ended the day at 1/7

RYE have suffered a disastrous start in their run chase against Frankston YCW at RJ Rowley Reserve. The Stonecats were sent in to bat first, and Joseph Gott was their best batsman. He opened and scored a fantastic 72 not out. Tom Baron impressed by taking 6 wickets. The Stonecats declared for 6/198, confident of doing some damage to Rye in the last 20 overs of the day. Rye’s run chase got off to a dismal start, as the first three wickets fell for just six runs. Jarrod Saw opened and saw everyone around him fall cheaply. He ended up at 11 not out, but will have to put on a lot more runs to get close to their target. Rye ended up at a miserable 5/20 at stumps.

At Balnarring Reserve, Boneo’s total of 166 will prove tricky to chase down for Balnarring. Boneo were looking really dangerous at 0/72, before Balnarring kicked into gear to get things back on track. Balnarring lost one wicket before close of play as they came in to bat for 10 overs. They will restart on 1/26. Dromana look to have an easy win wrapped up, as their first day of their clash against Skye started well. An unbelievable collapse of 9/35 did the damage for Skye as they opened the batting and struggled. Skye lost their last 5 wickets for just 1 run. They closed their innings with a run of 4/0. Dromana batted 12 overs before the close of play and finished at 0/19. Tyabb also suffered an extraordinary collapse as they took on Tootgarook at home. The Yabbies lost 9/43, as they stumbled to a total of 99. Nicholas Taranto top scored with a score of 34, but it may not prove enough. Tootgarook lost an early wicket, but only need 67 more runs to chase down their target when play restarts on day two. They will have nine wickets in hand. Carrum Downs had a bye.

PEARCEDALE have been handed a lifeline in their two day clash against Flinders after a horror opening. Pearcedale were slow scoring and ineffective, as they struggled to deal with Flinders’ bowling attack. They eventually were all out for 86 off 61

overs. With an easy task ahead of them, Flinders completely capitulated away from home. After the completion of 18 overs, they were at 4/16, setting day two up for an interesting conclusion. Kaine Smith finished with figures of 2/1 off his 9 overs, bowling an incredible 8 maiden overs. A David Macfarlane Reserve, Peninsula OB came close to defeating Sorrento after just one day of play. The Sharks won the toss and chose to bat first, but they would spend just 49 overs out in the middle. Adam Gailitis’ 6 wickets saw Sorrento slip to a paltry score of 89 all out. Old Boys came in and looked decent, with opener Dylan O’Malley top scoring with 42. Despite some good signs, their middle order collapsed with little impact. At 6/77 they should go on to win, but the contest is not over yet. Another low scoring affair occurred at Greg Beck Oval as Baxter took on Mt Eliza. Mt Eliza struggled badly, with only one batsmen registering a score higher than 10. They finished all out for 84. Baxter looked far from convincing as they came in to bat, and ended the day at 4/49, still in a good position to win. Langwarrin fared better against Mornington, recovering from 3/7 to end up all out for 144. Mornington finished at 1/12 at stumps.