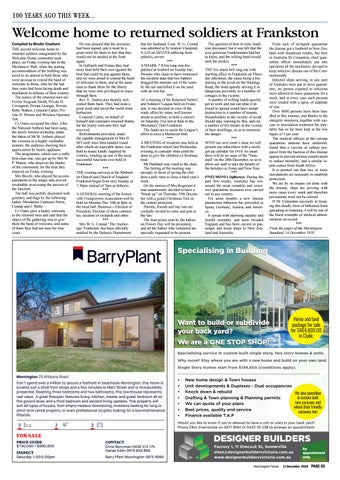 Welcome home to returned soldiers at Frankston Compiled by Brodie Cowburn THE second welcome home to returned soldiers inaugurated by the Welcome Home committee took place, on Friday evening last in the Mechanics’ Hall, when the seating accommodation of the building was taxed to its utmost to hold those who were anxious to extend the hand of welcome to those, who for the last four years had been facing death and mutilation in defence of their country. The names of the returned men are: Ferrier Sergeant Smith, Private H. Covington, Private Granger, Private Robt. Walker, Corporal Carter, Private D. Downs and Wireless Operator Tait. Cr, Oates occupied the chair. After the National Anthem had been sung, the newly formed orchestra, under the baton of Mr W. Aisbett, played the overture in a highly creditable manner, the audience showing their appreciation by hearty applause. The programme, which was a really first-class one, was got up by Mrs W. P. Mason, who deserves the thanks of the community for the treat they enjoyed on Friday evening. Mrs Boyett, who played the accompaniments to the songs, also proved invaluable in accruing the success of the function. The hall was prettily decorated with greenery and flags by the following ladies :Mesdames Cunneen, Petrie, Connal and J. Wells. Cr. Oates gave a hearty welcome to the returned men and said that the object of the gathering was to give them the hand of welcome, and some of them they had not seen for four years.

He was pleased that the armistice had been signed, and it must be a great relief for them to feel that they would not be needed at the front again. In Gallipoli and France they had more than held their own against the best that could be put against them, and we were proud to extend the band of welcome to them, and at the same time to thank them for the liberty that we were now privileged to enjoy through them. Rev. E. Tonkin also heartily welcomed them back. They had done a great work and saved the world from barbarism. Corporal Carter, on behalf of himself and comrades returned thanks for the hearty welcome they had received. Refreshments provided, under the capable management of Mrs H M’Comb were then handed round after which an enjoyable dance was held to music kindly supplied by visitors, winding up one of the most successful functions ever held in Frankston. *** THE evening services at the Methodist Church and Church of England Frankston begin from next Sunday at 7.30pm instead of 7pm as hitherto. *** A GENERAL meeting of the Somerville Fruitgrowers Association will be held on Monday Dec 16th at 8pm in the local hall. Business – Election of President: Election of show committee, taxation of orchards and other. *** Mrs W. G. Connal ‘The Anchorage’ Frankston, has been officially notified by the Defence Department

that her husband, Corp. W. G. Connal was admitted to St Anslem’s hospital, V.A.D on 20/11/18 suffering from arthritis, severe. *** A SHARK 7 ft 6in long was dispatched at Seaford on Sunday last. Persons who claim to have witnessed the incident state that two bathers dragged the monster out of the water by the tail and killed it on the sand with an iron bar. *** AT a meeting of the Returned Sailors’ and Soldiers’ League held on Friday last, it was decided in view of the ready offers by many well known artists to perform, to hold a concert on Saturday 21st inst at 8pm in the Mechanics’ Hall Frankston. The funds are to assist the League’s effort to erect a Memorial Hall. *** A MEETING of residents was held at the Frankston school last Wednesday evening, to consider what could be done to give the children a Christmas treat. Mr Hartland was voted to the chair. The feeling of the meeting was strongly in favor of giving the children a jolly time to close a hard year’s work. On the motion of Mrs Rogerson it was unanimously decided to have a “break up” on Thursday 19th December with a grand Christmas Tree as the central attraction. Parents, friends and tiny tots are cordially invited to come and join in the fun. The four prizes won by the babies on Flower Day will be presented, and all the babies who competed are specially requested to be present.

The question of how to raise funds was discussed, but it was felt that the ever generous Frankstonites had but to know, and the willing hand would seek the pocket. *** THE fire alarm bell rang out with startling effect in Frankston on Thursday afternoon, the cause being a fire starting in the scrub on the Hastings Road, the wind speedly driving it in dangerous proximity to a number of cottages in the vicinity. A number of willing hands quickly got to work and put out what if allowed to spread would have meant destruction to a number of tenants. Householders in the vicinity of scrub should take warning by this, and cut a number of fire breaks in the vicinity of their dwellings, so as to minimise the danger. *** WITH our next week’s issue we will present our subscribers with a nicely got up calendar for 1919. As usual there will be no issue of the “Standard” on the 28th December, so as to allow our staff to take the benefit of the holidays at Xmas and New Year. *** PNEUMONIA Influenza. During the past few weeks, Australia has witnessed the most complete and extensive quarantine measures ever carried out in any country. For some months a new disease pneumonia influenza has prevailed in Spain, Germany, Austria, and America. It spread with alarming rapidity and fearful mortality and soon invaded England and has been carried in passenger and troop ships to New Zealand and Australia.

From lack of stringent quarantine the disease got a foothold in New Zealand with disastrous results, but here in Australia Dr Compston, chief quarantine officer immediately put into operation all the machinery devised to keep infective disease out of the Commonwealth. Infected ships arriving in any port of Australia were put in strict quarantine; no person exposed to infection were allowed to leave quarantine for a week, and in every case such persons were treated with a spray of sulphate of zinc. Over 4000 persons have been handled in this manner, and thanks to the energetic measures, together with vaccine or inoculation treatment the mortality has so far been kept at the low figure of 3 per cent. The medical officers at the various quarantine stations have uniformly found that a vaccine or culture prepared from the bactisia of this disease appear to prevent serious complication to reduce mortality, and a similar report comes from South Africa. It is pointed out that two or more inoculations are necessary to establish protection. We are by no means yet done with the disease; ships are arriving with more cases every week and therefore precautions must not be relaxed. If Dr Compston succeeds in keeping this deadly form of Influenza from spreading in Australia, it will be one of the finest triumphs of medical administration on record. *** From the pages of the Mornington Standard, 14 December 1918

Want to build or subdivide your back yard? We are a ONE STOP SHOP!

Specialising service in custom built single story, two story homes &amp; units. Why move? Stay where you are with a new home and build on your own land. Single Story homes start from $149,850 (conditions apply).

Mornington 75 Wilsons Road Don’t spend over a million to secure a foothold in beachside Mornington, this home is located just a stroll from shops and a few minutes to Main Street and is immaculately presented. Boasting three bedrooms and two bathrooms, this townhouse represents real value. A great floorplan features living, kitchen, master and guest bedroom all on the ground level, and a third bedroom and second living upstairs. This property will suit all types of buyers, from empty-nesters downsizing, investors looking for long or short term rental property, or even professional couples looking for a low-maintenance lifestyle.