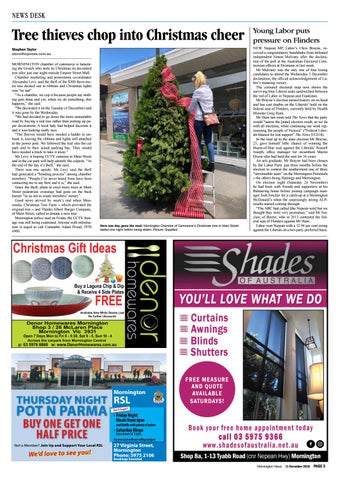 NEW Nepean MP, Labor’s Chris Brayne, received a congratulatory handshake from defeated independent Simon Mulvany after the declaration of the poll at the Australian Electoral Commission offices at Dromana in last week. Mr Mulvany was the only one of four losing candidates to attend the Wednesday 5 December declaration, the official acknowledgement of Labor’s stunning victory. The coloured electoral map now shows the surviving blue Liberal seats sandwiched between the red of Labor in Nepean and Frankston. Mr Brayne’s election turned history on its head and has cast doubts on the Liberals’ hold on the federal seat of Flinders, currently held by Health Minister Greg Hunt. Mr Hunt last week told The News that the party would “assess the [state] election result, as we do with all elections, while continuing our work representing the people of Victoria” (“Federal Liberals blamed for lost support” The News 5/12/18). In the lead up to the state election Mr Brayne, 25, gave himself little chance of winning the bluest-of-blue seat against the Liberals’ Russell Joseph, office manager for incumbent Martin Dixon who had held the seat for 16 years. An arts graduate, Mr Brayne had been chosen by the Labor Party just three months before the election to contest the southermost one of three “unwinnable seats” on the Mornington Peninsula – the others being Hastings and Mornington. On election night (Saturday 24 November) he had been with friends and supporters at his Balnarring home before joining campaign manager Josh Sinclair for a catch-up at a Mornington McDonald’s when the surprisingly strong ALPresults started coming through. “The ABC had called [the Nepean win] but we thought they were very premature,” said Mr Sinclair, of Baxter, who in 2013 contested the federal seat of Flinders against Mr Hunt. Labor won Nepean with a 12.94 per cent swing against the Liberals on a two party preferred basis.

MORNINGTON chamber of commerce is lamenting the Grinch who stole its Christmas its decorated tree after just one night outside Empire Street Mall. Chamber marketing and promotions co-ordinator Alexandra Levy said the theft of the $300 three-metre tree decked out in ribbons and Christmas lights was “so sad”. “As a chamber, we cop it because people say nothing gets done and yet, when we do something, this happens,” she said. “We decorated it on the Tuesday (4 December) and it was gone by the Wednesday. “We had decided to go down the more sustainable road by buying a real tree rather than putting up paper decorations. A local lady had helped decorate it and it was looking really nice. “The thieves would have needed a ladder to unhook it, leaving the ribbons and lights still attached to the power pole. We followed the trail into the car park and to their actual parking bay. They would have needed a truck to take it away.” Ms Levy is hoping CCTV cameras in Main Street and in the car park will help identify the culprits. “At the end of the day it’s theft,” she said. There was one upside: Ms Levy said the theft had generated a “bonding process” among chamber members. “People I’ve never heard from have been contacting me to say how sad it is,” she said. Since the theft, plans to erect more trees at Main Street pedestrian crossings had gone on the back burner “so as not to waste members’ money”. Good news arrived by week’s end when Moorooduc Christmas Tree Farm – which provided the original tree – and Thanks Albert Burger Company, of Main Street, called to donate a new tree. Mornington police said on Friday the CCTV footage was still being examined. Anyone with information is urged to call Constable Adam Proud, 5970 4900.

Here one day; gone the next: Mornington Chamber of Commerce’s Christmas tree in Main Street lasted one night before being stolen. Picture: Supplied

POT N PARMA BUY ONE GET ONE HALF PRICE

Not a Member? Join Up and Support Your Local RSL

and Raffle with plenty of prizes

• Saturday Bingo Eyes down at 12pm.

Try your luck with our rolling Jackpot